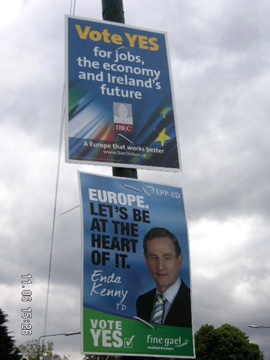 The architects of the European 'masterplan' reel after they find that the people of Ireland haven't&nbsp;responded as they wished to weeks of propaganda which has been encouraging them to support the Lisbon Treaty (see photo).&nbsp;

Irish voters have been accused by the governments of not understanding the Lisbon Treaty. It seems that Irish voters, 53.4% to 46.6% of whom voted against the treaty during the 12th June referendum, were signaling their concerns about Brussels-based policies that they didn't like as well as concerns over handing over ever more sovereign power to European institutions, especially the unelected body of officials in the European Commission.

One of the best layouts of the Lisbon Treaty is set out in the Open Europe document, The Lisbon Treaty and the European Constitution: a side by side comparison. The left hand column gives you the proposed text, with bold text referring to areas where amendments have occurred to language in existing Treaties, underlined text refers to new language and strikethroughs refers to deleted text.

We provide an extract below from the Lisbon Treaty text that gives some idea of how further powers will be conferred to the European Commission:

The European Commission and its President

Isn't this the sort of text that concerns so many people? It's not surprising that Irish voters are concerned, especially as they are very aware of how the European Commission constitutes the biggest threat to their ongoing ability to manage their health naturally.

Let's face it, the public are a lot less dumb than governments think. The Irish people were swamped with a massive propaganda machine (see billlboards in photo taken on the day of the election by ANH Executive Director, Rob Verkerk) that was pushing them towards a 'yes' vote—yes, the people dared to think for themselves!

This is a major spanner in the works for the European masterplan that was originally conceived by Nazis who were subsequently tried for war crimes at Nuremberg. One of these, Dr Fritz ter Meer, who was directly involved in developing the nerve gas Zyklon-B that killed millions, especially Jews, in Nazi concentration camps, was released from jail after serving only parts of his sentence. He then became Chairman of Bayer, one of the most largest pharmaceutical companies in the world. See Pre-history section of the ANH Codex campaign for more information.

It is humbling when we see people standing up for their freedoms, rights and—the democratic process. Well done, Ireland!