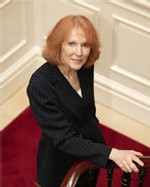 Independent Irish MEP Kathy Sinnott addressed the Irish health trade while at the Rude Health Show at the RDS in Dublin on the 6th and the 7th September, signalling major concerns over the European Commission’s proposed approach to harmonising European laws affecting the natural products industry.

“We should be the healthiest people in the history of the world. We are most certainly not. Every other person has a chronic disorder. We seem to have traded swift early death for early debilitation and slow death. We have, with the introduction of nutrient-depleted foods, toxic and stressful lifestyles, together with social and environmental disconnection, made ourselves increasingly sick. In fact we have created a culture of sickness, a perverse culture in which sickness seems to most people to be a normal and expected part of life.

And this is where all of you assembled here come in. You are the ones who remind people that there is another way and that that way will be found in nature. It is you who have committed to alleviate suffering, heal and prevent sickness with nature respecting remedies and techniques.”

Ms Sinnott went on to explain her concerns for the rash of regulation emanating from Brussels. “Once again consumers will be the real losers along with SMEs, including health stores who will be unable to survive", warned Ms Sinnott at the dinner.

Dr Robert Verkerk, scientific advisor to the IAHS and executive director of the European campaign group, the Alliance for Natural Health, based in the UK, supported Ms Sinnott’s concerns. He explained that flawed scientific risk assessment and management methods were largely responsible for the legislative proposals that, if not altered substantially, would hit the leading edge of the industry particularly hard, potentially putting companies, health stores and nutritional practitioners out of business.

In his presentation at the Rude Health show, Dr Verkerk said:

“When a regulation forces supplement companies to limit selenium to the amount found in less than one brazil nut, or natural beta-carotene to less than that found in one carrot, you know that the risk management models being used are faulty. We are a long way down the track towards proposing modifications to the existing models and proposed risk management options.

If implemented in place of the draconian measures currently mooted, they would not only ensure consumers are properly protected, but annihilation of many of the SMEs representing the leading edge of the natural products industry could be avoided. Governments should be aware that survival and growth of this sector is vital if disease prevention strategies are to be prioritised.”

Tribute was paid to Kathy Sinnott by the IAHS at the Rude Health dinner, particularly regarding her hosting of the IAHS submission to the EU Petitions Committee.  Kathy Sinnott explained that the declared “admissibility” of the IAHS petition reopens the debate on the EU’s deliberations on proposed Maximum Permitted Levels of vitamin and mineral supplements.  Jill Bell, President of the IAHS, commented “It is ridiculous that the food supplements which, as Kathy Sinnott’s personal experience shows, can play a crucial role in supporting health, may arbitrarily be removed from sale.  These food supplements are demonstrably safer than the food in my fridge. The logical outcome of the current process would be an EU warning label stuck to every bag of carrots we buy!”

Erica Murray, IAHS spokesperson, added “We are delighted the door is still open regarding the EU’s deliberations on food supplements, and we look forward to meeting shortly with the Commissioner for Health Vassiliou to pursue our discussions.”

Kathy Sinnott is a member of the European Parliament for Munster, elected in 2004.  She is an extremely active MEP, taking on roles in numerous parliamentary Intergroups, Delegations and Committees. Her involvement in the Public Health and Food Safety Committee and a number of health Working Groups has given her the opportunity the promote food supplements as a factor in natural healthcare.  As Vice President of the Petitions Committee, Kathy has been hosting MEP to a number of petitions relating to the Food Supplements Directive.

The Irish Association of Health Stores (IAHS) was founded in 1986 to represent the interests of independent health stores in Ireland.

The IAHS has approximately 80 members, representing over 100 stores.  It exists to ensure that health food retailing is ethical, responsible, truthful and professional.  The Association operates under a written Constitution, and its members are required to adhere to a strict Code of Ethics and to meet mandatory training standards.

The Association continues to lobby intensively on behalf both of its own members and of consumers for the right to maintain access to food supplements and herbal remedies which have been available in Ireland for over forty years.  www.irishhealthstores.com

The Alliance for Natural Health – www.anhcampaign.org

The Alliance for Natural Health (ANH) is a UK-based, international, non-governmental organisation, founded in 2002, which is working on behalf of consumers, medical doctors, complementary health practitioners and health-product suppliers worldwide, to protect and promote natural healthcare, using the principles of good science and good law.

The ANH’s chief objective is to help develop an appropriate legal-scientific framework and environment for the development of sustainable approaches to healthcare, while also helping to promote natural health. Within this setting, consumers and health professionals should be able to make informed choices about a wide range of health options, and in particular those that relate to diet, lifestyle and non-drug-based or natural therapies, so that they may experience their benefits to the full while not exposing themselves to unnecessary risks.

The ANH has pioneered the concept of sustainability as applied to healthcare - a concept that is already the most acceptable long-term approach for a variety of other industries, including agriculture, energy, construction and tourism. But pharmaceutically based, orthodox western medicine has strenuously avoided associating itself with the notion of sustainability. Western healthcare is now considered to be the third leading cause of death in industrialised countries in the West, and it is increasingly threatening and continuing to replace long-established traditional systems of healthcare from Asia, southern Africa, South America and other parts of the world.