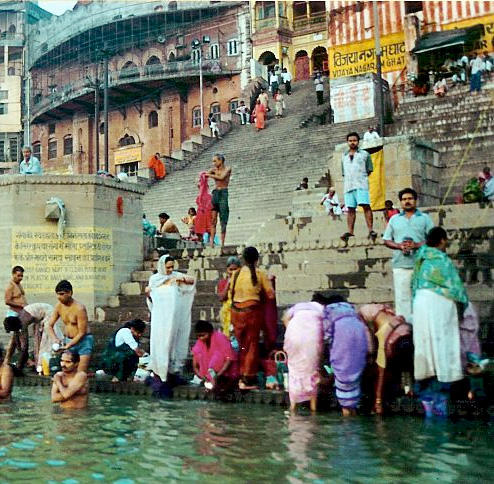 Read Part 1 of the ANH's feature taking in the visit to Varanasi as part of its information gathering, network strengthening tour of India.&nbsp; This forms an integral part of ANH's ongoing campaign to nurture traditional medicinal cultures.&nbsp;

Two members of ANH’s core team, Dr Robert Verkerk and Meleni Aldridge, have almost finished a 10-day information gathering, network strengthening tour of India, as part of ANH’s ongoing campaign to protect traditional medicinal cultures.  Their tour took in the historic city of Varanasi, Uttar Pradesh, which many argue is the birth place of modern civilisation itself, as well as being the origin of India’s overriding philosophical and health care system, Ayurveda.

While in the Holy city of Varanasi, where the ANH team came to study and meet with Ayurvedic researchers and practitioners from Banaras Hindu University (BHU), the ANH team also evaluated quality assurance standards in a classical Ayurvedic manufacturing facility.  The visit to India also took in the 3rd World Ayurveda Congress in Jaipur, Rajasthan running from 16th – 21st December at the National Institute for Ayurveda (NIA), which will be discussed in Part 2 of this feature. 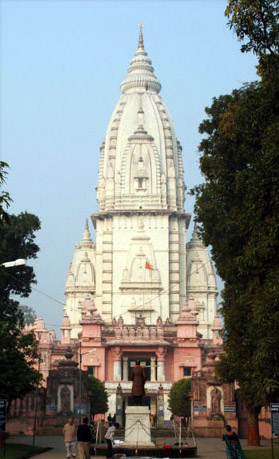 The Temple at Banaras Hindu University

Ayurveda – a philosophy for life

Looking at the history of medicinal cultures, like Ayurveda, Unani, Siddha, Chinese, Japanese and Western herbal medicine, it is clear that Ayurveda and Chinese medicinal cultures are the oldest and most developed.  But it has been found that the Vedas are the first record of this kind of knowledge and hence, Ayurveda appears to be the forerunner, tracing its routes back to the earliest records of life itself.

In Ayurveda, health and disease are seen as the two sides of the same coin, the negative and positive aspects of life.  With disease, degeneration and death acknowledged as ongoing processes of life, the positive mechanisms for achieving health and wellbeing are also provided by life and by nature.  What we in the West regard as ‘health’, in simplistic Ayurvedic terms, is merely the result of these two aspects (positive and negative) alive and inseparable in the body throughout one’s life.  Ayurveda is therefore not only a science of medicine, but a “wholistic” science of life and longevity.

Whilst Ayurveda is now spread well outside of India and practised in many countries around the world, it seemed appropriate to visit Varanasi, often said to be the oldest living city and site of Buddha’s first sermon, to collect information on classical and authentic Ayurveda.  Varanasi is also a great centre of learning and the home of the respected BHU, which has large Faculty of Ayurveda within the Institute of Medical Sciences.  BHU is acknowledged as one of the main Ayurveda academic teaching and research resources in India.

Professor Yamini Tripathi from the Department of Medicinal Chemistry, Institute of Medical Sciences at BHU, kindly hosted a day visit which, amongst various meetings, included an invited presentation by Dr Rob Verkerk on the threat to classical Ayurveda posed by EU legislation. A tour of Prof Tripathi's research facility at the BHU was included.  The audience included leading BHU researchers, doctors, surgeons, practitioners and PhD students.  It was an extremely productive day, which culminated in the formation of a scientific working group committed to supporting the ANH whilst it collates specific scientific data—data that will form the basis of a new proposal to the European Commission (EC), for more appropriate purity and manufacturing standards for traditional herbal products, in contrast to the existing pharmaceutical standards which many Ayurvedic products cannot meet.

We met also with Professor Tripathi's brother, Vachaspati Tripathi, a pharmacist-cum-social-reformer. Mr Tripathi operates his own herbal business, whilst also expanding knowledge and use of Ayurveda in India through his own NGO (non-governmental organisation), the Prof SN Tripathi Memorial Foundation, which is dedicated to the Tripathi brothers' father—one of the great, recent scientists in the field of Ayurveda. 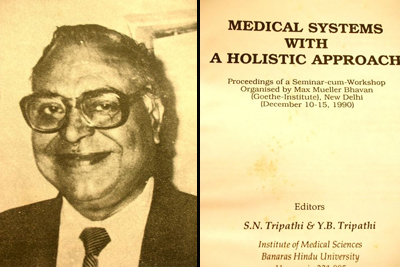 Professor Tripathi Snr, and the inside cover of the book both Professors, father and son, edited, gifted to Dr Verkerk during his visit 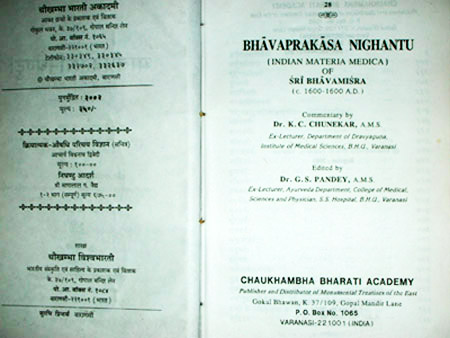 The time spent at Varuna proved to be fertile ground for the exchange of ideas, sharing of scientific data and invaluable learning about Ayurvedic tradition.  It was a hot bed of open discussion, refreshingly free from the constraints of proprietary information.  All parties united within the common goal of working towards an appropriate and inclusive regulatory framework for Ayurveda.

TeamVaruna has agreed to become an ANH industry partner, to actively participate in the global debate over the suitability of the existing EU THMPD to practically handle the herbal products it was designed for.  The bigger picture being to minimise the fragmentation to Ayurveda that is bound to occur when regulators, lacking in any understanding, take a ‘cookie-cutter’ approach to an ancient medicinal culture.  To this end, Varuna’s scientific team, under the direction of Dr Rob Verkerk, will be undertaking specific scientific assignments, which include analysis of key heavy metals, comparisons between water and solvent extracted herbal products, and the generation of stability data for poly-herbal formulations using active marker compounds.  Mr Bhaduri, with his extensive knowledge of the industry and key contacts, has indicated his interest in acting as the Indian Project Co-ordinator for this working group.

The results from these studies will form one of a number of case studies being collated by the ANH demonstrating in practice that the current pharmaceutical standards set by the EC are simply not-fit-for-purpose when applied to traditional medicinal herbal preparations such as Ayurveda.  Following a meeting in November 2008, the ANH is calling for the EC’s DG Enterprise to consider relaxing the existing stringent pharmaceutical standards that are wholly inappropriate and maladapted to the unique properties of traditional herbal medicines.  Whilst these case studies are based on the Ayurvedic model, the new proposal by the ANH aims to benefit all herbal traditions and products suitable for licensing through THMPD. 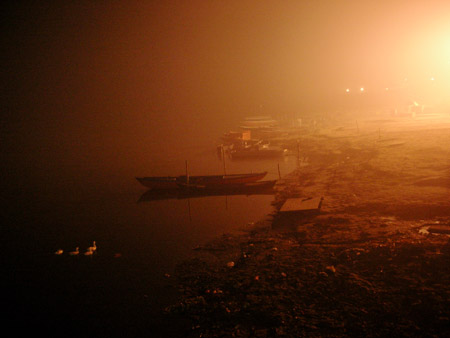 The River Ganges after sundown in Varanasi

THMPD – not fit for purpose

The ANH has long held that the THMPD, intended to be a simplified, ‘fast-track’ licensing system for herbal medicinal products, is not suitable for the products from traditional medicinal cultures that it was specifically intended for.  One of the reasons for this is because the data requirements, taken straight from an allopathic pharmaceutical model, are completely unsuitable when applied to poly-herbal blends, with multiple active compounds, that rely on the synergistic formation of further compounds for their unique therapeutic action. These kinds of products are the centrepiece to the Ayurvedic classical medicine portfolio that is now several thousands of years old.

The directive also doesn’t allow the inclusion of minerals, which are central to the Rasa Shastra tradition in Ayurveda.  Add to this the requirements for full genotoxic testing of each herb and the exclusion of any product that has had less than 15 years usage in the EU, and you have a massive barrier in place, which excludes from Europe the vast majority of products associated with the Ayurvedic tradition.  All of this will become effective across Europe after the transition phase of the THMPD expires on 31st March 2011.  Download full THMPD briefing paper.

These poly-herbal blends in classical Ayurveda have been used safely for thousands of years and it is a travesty that western models are being incorrectly applied with an effect akin to a cookie-cutter through dough.  Whilst the dough forms the totality of the traditional medicinal culture, only the piece within the cookie-cutter will make it through in the EU, consigning the rest to history.  The inevitability of this method of regulation, that rides roughshod over ancient medicinal cultures, will be to lose something so precious that has been handed down safely, with great benefits, over centuries.  And discriminate against those in Europe currently using Ayurvedic medicine as their chosen method of healthcare or those who may wish to use it in the future, stifling innovation and increasing our separation from nature.

Traditional medicinal cultures, such as Ayurveda, are not just a healthcare system, they are a philosophy for life in which good health, physical, mental and spiritual, is a natural and unavoidable consequence.  It is imperative that this philosophy and tradition be allowed to continue in the West in its entirety.  We must resist the forced fragmentation by regulators of an ancient tradition, where the only surviving remnants in the West, will be those parts considered innocuous e.g.  yoga, cosmetics, steam and massage therapy with Ayurvedic oils and non-therapeutic herbal products.

Whether sheer arrogance or complete ignorance, the irreverent and ham-fisted way in which the European regulators deal with such ancient, dignified and profound traditions, leaves such a bad taste in one's mouth, one feels compelled to reach for a spoon of chyawanprash*—even if you've had to smuggle it back in your suitcase from your last holiday!

* Chywanaprash is a delicious sweet paste comprising a blend of more than 40 fruit, spice and herbal ingredients and is one of the classic mainstays of Ayurvedic tradition.  It is said that the recipe was created thousands of years ago as a rejuvenating elixir by the ancient sage Chywana.   It literally means “Chywana’s jam” and is a potent antioxidant, as well as being loaded with nutrients and vitamin C.

Our special thanks go to Robert Lloyd, UK Chiropractor and Ayurvedic therapist, for his invaluable networking support that has made these working partnerships possible.

Click here to go back to Current Campaigns page