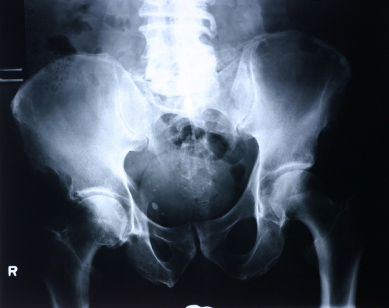 Higher dose vitamin D reduces fractures by 20% in over 65s

A team of researchers at the University of Zurich has just published a meta-analysis (study of trials) on the role of vitamin D supplements in reducing fractures. Fracture rates are closely associated with osteoporosis. The study, published in the Archives of Internal Medicine, led by Dr Heike Bischoff-Ferrari, evaluated 20 double blind randomised controlled trials (RCTs) which included some 82,000 fractures. The trials compared oral vitamin D supplements, with or without calcium, against placebo.

The researchers found that “including all trials, antifracture efficacy increased significantly with a higher dose and higher achieved blood 25-hydroxyvitamin D levels for both end points”. They also found that by pooling the results of those trials using a higher dose of vitamin D (i.e. more than 10 micrograms(mcg) or 400 International Units (IUs)/day), nonvertebral fractures amongst community-dwelling individuals were reduced by 29% whilst those amongst institutionalised individuals were reduced by 15%, and that “its effect was independent of additional calcium supplementation”.

Of further interest, the researchers added that “it is possible that greater benefits may be achieved with earlier initiation of vitamin D supplementation and longer duration of use. Our results do not support use of low-dose vitamin D with or without calcium in the prevention of fractures among older individuals”.

The conclusion by the researchers was that “nonvertebral fracture prevention with vitamin D is dose dependent, and a higher dose should reduce fractures by at least 20% for individuals aged 65 years or older”.

The reference for the study is given below (click for abstract):

Vitamin D is produced by the body in response to exposure to sunlight, though it is also obtained (in much smaller amounts) through eating oily fish, liver and eggs.  A recent study, published in the Archives of Internal Medicine, has indicated that vitamin D deficiency has increased alarmingly.

The Recommended Dietary Intakes (RDIs) for vitamin D are presently set very low at just 5 mcg (micrograms) (200 International Units (IU)) for people up to the age of 50, 10 mcg (400 IU) for those between 50 and 70, and 12.5 mcg (600 IU) for those over 70. Dr Reinhold Vieth and other leading vitamin D researchers have upheld for as long as a decade that as much as 100 mcg (4000 IU) should be taken daily by those in northern or southern latitudes during the winter months in order to support optimal blood levels of 25-hydroxyvitamin D.

The ‘higher doses’ referred to in the above-mentioned review are still comparatively modest amounts of vitamin D; but in the light of the comments by the researchers about the ineffectiveness of low dose vitamin D with regard to fracture reduction, the Maximum Permitted Levels (MPLs) of just 200 IU (5 mcg), likely to be proposed by regulators in Europe, begin to look very inadequate indeed.  (The restrictions look likely to be proposed on the basis of flawed risk assessment, based on the synthetically manufactured, more toxic form of vitamin D, vitamin D2).

Although calcium (in combination with magnesium) is of crucial importance in the formation of bone, and short trials of calcium supplementation have shown that it can help to reduce loss of bone density in postmenopausal women, it has been known for some time that high calcium diets do not appear to reduce the risk of hip fractures, and should by no means be the main focus when it comes to osteoporosis recommendations. It has been shown that the same applies for fractures amongst older men.  Individuals at risk of fractures are much more likely to be deficient in vitamin D and magnesium, than in calcium.

Although fewer studies have focussed on vitamin D status in maintaining or increasing bone density, it is now generally recognised as being the crucial factor, along with adequate intake of magnesium, potassium and maintenance of the ‘weight bearing’ strength of the individual (the use-it-or-lose-it principle that generally applies to muscle and bone).

Further information on vitamin D from the ANH:

If you don’t want unfair restrictions on vitamin D and other nutrients, please sign our online petition at: http://www.ipetitions.com/petition/anh-vitaminrestrictions