European citizens cast their votes in the European Parliamentary elections between 4 and 7 June.  However, turnout has now fallen consistently in every EU election since the first one in 1979, with the only EU countries in which turnout is high being those where voting is required by law.  The figure below tells the story of what happened.  None of the three big parties, the Conservatives (EPP-ED), the Socialists (PES) or the Liberal Democrats (ALDE) gained seats compared with the last (2004) election.  In fact they lost seats, the Socialists losing the most by a reasonable margin.

The only two groupings to gain seats were the Greens (7.1% from 5.5%)—and much more significantly—the independent candidates (12.6% from 3.8%).  Given that a good many of these independents are either anti-EU or have huge misgivings over the European agenda, these elections may represent the beginning of a new era for the European Parliament.  For many years, the role of the Parliament has been seen as ancillary to the policy making machine, the primary drivers being an unelected European Commission and the Member State governments acting through the Council of Ministers.  Despite there now being 27 Member States in the Union, a few exert disproportionate power, these being in particular Germany and France. 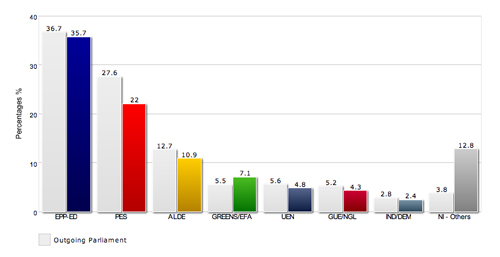 Source: TNS opinion in collaboration with the European Parliament

NB: From July 2009, all political groups must include Members from at least seven Member States. The minimum number of Members required to establish a political group is 25.

The weakening of the Socialist presence is in many ways a vote against those that have supported the European agenda, and this vote is strengthened by very strong performances by the likes of the UK Independence Party (UKIP) that is staunchly anti-Europe.  In the UK, UKIP, headed by Nigel Farage, displaced the ruling Labour party in the European elections, coming in second after the Conservatives.  Labour, presently in turmoil under the premiership of Gordon Brown, lost a staggering 6.9% of the vote compared with the last election.

It seems that the European people are beginning to wake up to the fact that their national sovereignty has been almost completely eroded in recent years and putting their head in the sand and ignoring what’s going on in Brussels won’t make things any better.  It is a matter of rescuing the last remnants of democracy from a system that’s been rapidly moving towards totalitarianism.

For European citizens who care about their futures and those of their children, 2009-14 will need to be a time of engagement with their European elected representatives.  People will need to make clear what it is that they want, and what they don’t want, making their case as solidly as they can.  We at the ANH look forward to working with the people of Europe, as well as with those Members of the European Parliament who are concerned about our disconnection from nature, about the chemicals in our food and our water, about the healthiness of the food in our supermarkets—and about the attacks on natural healthcare.