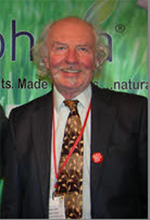 When so-called 'competent authorities' play fast and loose with the law how can true justice prevail?

The future of one of the UK’s most innovative food supplement manufacturers is held in the balance by a Welsh Magistrates Court. Last Thursday, the Court heard a criminal case brought by the Torfaen Trading Standards Office, which claims that a species of ryegrass contained in the natural sleep aid product Asphalia is an unauthorised ‘novel food’.  After a day of deliberations, and expert evidence provided by both sides, the magistrate adjourned the conclusion of the case until 28th July.

At the Abertillery Magistrates Court, barrister Hugo Charlton of 1 Grays Inn Square, London, acting on behalf of Asphalia Food Products Ltd, accused the expert witness acting for the prosecution, Dr Chris Jones of the Food Standards Agency, of serious abuse of legal process. During proceedings, the defendant, Roger Coghill, managing director of the small Welsh food supplement company Asphalia, demonstrated that the novel food status of the ryegrass species, Festuca arundinaceum, for which his company had been indicted, had been unclear, as demonstrated by the European Commission’s online ‘Novel Foods Catalogue’ which categorised the status as “uncertain” up until days before yesterday’s hearing.

But Dr Jones, called as an expert witness for the prosecution, had failed to disclose that he was also a member of the European Commission’s Working Group on novel foods. In this capacity he was able to apply his influence to alter the status given to particular foods or food ingredients. During cross-examination, it emerged that just a few days before the trial occurred, Dr Jones had persuaded his colleagues to alter the classification given in the Novel Foods Catalogue. The new status categorises Festuca arundinaceum unequivocally as a ‘novel food’. It became apparent during the cross-examination that the motive to push through this change was to assist the prosecution’s case. The implications of this are considerably greater given the case’s criminal, rather than civil, nature.

Robert Verkerk PhD, acting as an expert for the defence, commented, “This case epitomises what is wrong with so many European laws, and how they may work to interfere with people’s fundamental rights and freedoms. There is no question of any harm being caused by the product, while hundreds of people have provided written testimonials to the company citing its benefits. Yet, because of an arbitrary date of enforcement of a law enacted in Brussels that was originally intended to protect people from GM foods, a small Welsh company’s future is now held in the balance while the company’s director could be made a criminal.”

The basic premise of the case, as with others where the regulator has challenged a company for sale of an unauthorised novel food, is simply that foods or food ingredients which have not had a significant history of use prior to the date in which the European Novel Foods Regulation (No. 258/97) came into effect, namely 15 May 1997, must pass through an onerous pre-market authorisation process. The prosecution is arguing that Asphalia contained a novel food ingredient which had not been submitted for authorisation.  The authorisation process, which requires that extensive scientific evidence of the safety of the food or ingredient is submitted, can be prohibitively expensive, often exceeding £300,000 per ingredient, as well as time consuming, sometimes taking years to finalise or ultimately being rejected for lack of evidence.

There has been extensive criticism of the Regulation, not only within the EU, but as far afield as the USA and the United Nations, given its discriminatory and disproportionate effects. When the Regulation first came into effect in 1997, it aimed to primarily protect consumers from biotechnological processes, especially genetic modification (GM). Subsequently, a distinct regulatory regime has been built for GM foods, and the existing Regulation now acts as a serious barrier to innovation and use of non-European foods and botanicals.

The defence barrister, Hugo Charlton, pointed out that Dr Jones had forced the re-classification through in the last few days even though he was fully aware that the defendant had been in dialogue with Dr Jones’ own colleagues in the Food Standards Agency for some months. The purpose of this dialogue was clearly to provide Asphalia with an opportunity to demonstrate that ryegrass powder, like wheatgrass and barleygrass powders, had a significant history of use prior to 1997 therefore could not be regarded as a ‘novel food’ ingredient. Rye grains are used traditionally in rye bread and beer products, but the leaves from a variety of ryegrasses are also used as ingredients in a number of leading ‘supergreens’ products which have been in production by US companies for several decades.

Leading health journalists have referred to Asphalia as one of the biggest breakthroughs in natural sleep aids. The product has no known no side effects, is sold in over 400 UK health food stores and was the winner of a Highly Commended award for best New Food Supplement of 2008 at the premier natural products trade show, Natural Products Europe.  The product was developed by Roger Coghill and colleagues at Coghill Research Laboratories of Pontypool, Wales.

Robert Verkerk PhD is an internationally acclaimed research scientist, who has for 25 years specialised in health, environmental and agro-ecological issues. He is the scientific and executive director of the Alliance for Natural Health (www.anhcampaign.org) and acts as an independent consultant to industry.

Fancy letting one man control your biometric and health data?

The one-sided battle of Trafalgar

The one-sided battle of Trafalgar