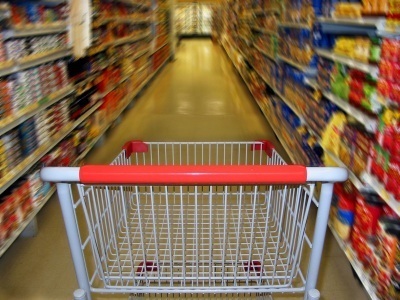 
Could the &lsquo;multi-national giants&rsquo; ever succeed in overriding consumer power?

"The big supermarkets have held secret talks to pave the way for the introduction of controversial GM crops on to their shelves, industry sources said last night.


The stores banned GM ingredients more than ten years ago in response to public anxiety about their impact on human health and the environment.

But a source indicated that all the major supermarkets were involved in the discussions except Waitrose.

Multi-national giants have been involved in a wide-ranging campaign over the last year to suggest GM crops could be the solution to Third World hunger.

That notion was rejected by a UN study last year.

But the Government has ordered the Food Standards Agency to carry out a year-long spin campaign to win support for GM. Earlier this year Sir Terry Leahy, boss of Tesco, Britain's biggest supermarket, said supermarkets may have made the decision to reject GM products too hastily."

Whilst all of the facts are not available yet, it is clear that this news has stirred up a storm in the UK with the anti-GM comments pouring in thick and fast! It's heartening to see so many UK citizens ‘joining the dots’ and seeing through the GM ‘spin’ (as have many have elsewhere in the world).

The pressure for global acceptance of GM foods has less to do with a moral obligation to ‘feed the world’ and much more to do with corporate profits for ‘Big Food’ and ‘Big Agra ’.  Control of the global food supply by a handful of transnational biotechnology companies with clear commercial and political motives poses a huge threat to the livelihood of thousands of small farmers and growers worldwide. To read more about this and many other aspects of concern, please see our ‘Say NO to GM’ campaign.

A crucial point in this issue is the lack of adequate research on the human health and environmental effects of GM. This glaring, gaping hole in GM ‘science’ is being ignored or played down by governments, health regulators and the vested interests in agri-business and allied sectors.

Scientists have revealed a very large number of adverse effects associated with the genetic engineering of crop plants.

View a 10 minute summary clip of Jeffrey Smith talking about GMO's at the 'Total Health Show' in Toronto, Canada 2009 in our multimedia section.

Please remember that we as consumers have the ultimate power to vote with our ‘wallets’, ‘feet’ or (as Jeffrey Smith puts it) ‘fork’. If we all do this, just imagine the power we have to shut down the GM industry! Could this not easily surpass the perceived power held by the large corporations?

We can make our views known to our local supermarkets, we can ask questions, we can avoid buying foods known to contain GM ingredients (Europeans need only read the labels of packaged or processed foods to check for GM ingredients)  or we can buy organic foods. We can also buy only from those stores which are themselves making a stand against GM.

It is also important to air these issues, and pass on this crucial information to others. Perhaps your children can press for a debate about the issues at school, or you can encourage others to approach their supermarkets about the issues over which they feel strongly. You could also write to your MPs. For information about how to do this, please see the ‘Get involved’  page on our website, and scroll down to the subheading: ‘Use your democratic right’.

Consumers in the US—as well as other parts of the world—can learn a lot about the ways of avoiding GM by going to the website of the Institute for Responsible Technology, its Campaign for Healthier Eating in America, its Non-GMO Shopping Guide and its GM-Free Schools Campaign. Also, look out for the Non-GMO logo that’s going to be increasingly found on US produce once the initiative is launched next month. The initiative currently has the support of food businesses with around $12 billion turnover.

Let us all take action for the sake of our children and to preserve the natural biodiversity of our beautiful planet. Remember, genetic engineering results in  unnatural, irreversible, permanent changes (with unknown consequences) in an organism, and in all future life that develops from that organism!