“Consumers can take no comfort from the misleading opinion on fluoride risks from the Icelandic volcanic ash-fall issued on 26th April 2010 by the European Food Safety Authority (EFSA)” said VOICE spokesman Robert Pocock adding “EFSA’s previous risk assessment of fluoride on which its views of the hazards of fluoride from the Icelandic volcano are based, are deeply flawed. If accepted, it would put thousands more children in Ireland at risk of permanent damage to their teeth through ‘moderate’ dental fluorosis.” EFSA has identified fluoride from the volcanic ash as posing the greatest short term dietary risk to human and animal health. 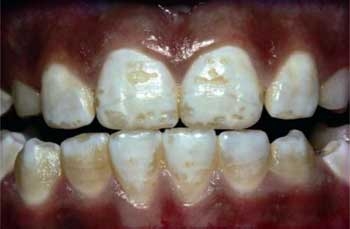 ‘Moderate’ dental fluorosis affecting up to 5% of a population is the condition EFSA uses to set the tolerable upper intake level of fluoride. According to a recent University College Cork (UCC) survey, about 1% or 350 children living in fluoridated areas of Ireland have already developed moderate fluorosis by age 15. Intakes of fluoride at the new upper intake level used by EFSA would result in another 1,300 children of this age in Ireland getting this same irreversible damage to tooth enamel. Added to this 1% with ‘moderate’ fluorosis must be added the even more disfiguring and so-called ‘severe’ fluorosis affecting another 1%, so that in total under EFSA’s assessment some three thousand 15 yr olds would be victims of this irreversible condition each year in Ireland. 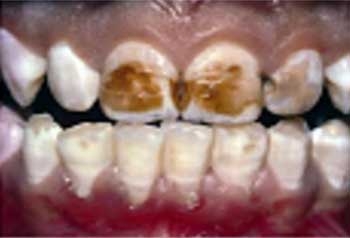 By the age of 15 yrs, approx 1% or about 300 children in Ireland have developed 'severe' dental fluorosis (Source: Oral Health Services Research Centre, Cork)

Not only does EFSA’s derivation of a tolerable upper safe limit of fluoride intake in humans ignore the Irish evidence of fluorosis in children but it is completely at variance with the EU directive on fluoride toothpastes. Based on the advice of the EU Scientific Committee on Consumer Safety (SCCS), this directive explicitly warns children not to swallow fluoride toothpaste.

Specifically as a risk management measure to reduce the risk of dental fluorosis, the Commission Directive (2007/53/EC) amends Cosmetics Directive (76/768/EC) and from 19th March 2009, requires all toothpastes containing from 1,000 to 1,500ppm fluoride to be labelled with the wording “Children of 6 years and under: Use a pea sized amount for supervised brushing to minimize swallowing.” Most fluoride toothpastes on sale in Ireland today are so labelled to warn parents of the danger of swallowing fluoride. 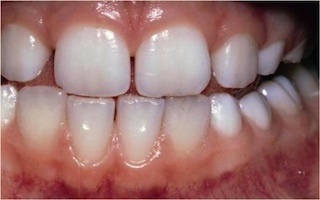 The SCCS also questions ‘systemic fluoride supplementation’ precisely because of the risk of dental fluorosis in children. Very significantly, EFSA in its recent opinion on the risks of fluoride in volcanic ash from Iceland appears to completely disregard this advice. In section 4.1 of its opinion on volcanic ash fluoride is stated “it (fluoride) is beneficial to prevent dental caries when ingested or applied topically with dental products.” (emphasis added).

On the one hand the Commission’s SCCS warns children to minimize swallowing fluoride while on the other hand, the EU’s food safety watchdog in Parma, northern Italy appears cavalier about just how much fluoride a child swallows so long as under one child in twenty suffers permanent tooth enamel damage. And as shown by the above UCC survey a 1% incidence of ‘moderate’ fluorosis was accompanied by another 1% with ‘severe’ fluorosis, therefore the EFSA upper limit would in reality be one in ten, not one in twenty children affected by a serious form of dental fluorosis.

So incoherent and misleading is EFSA’s fluoride exposure assessment for children that no reliance can be placed on its calculation of a safe level of fluoride intake for adults either. EFSA makes the totally irresponsible claim that for a 60Kg adult a lifetime daily intake of 7.2mg fluoride is safe. This is based on the ridiculously low uncertainty factor of 5 when a factor of 100 would be more appropriate for a bio-accumulative substance such as fluoride. EFSA’s safe adult intake is in disregard of the established evidence that as little as 2 to 3mg of clinically-administered fluoride per day reduces normal thyroid functioning in adults.

Commented Pocock “Given EFSA’s grave failings in risk assessment of fluoride from food,water and other sources, it is deeply worrying that the Commission directed the scientists who began work in April 2009 on a separate risk assessment on fluorides in drinking water, to collaborate closely with EFSA. And now whatever these new volcanic fluoride risks turn out to be, the fact remains that thousands of children in Ireland as well as a few fluoridated areas of England, are already at risk from over-exposure to fluorides from their drinking water. Once again we appeal to Health and Consumer Protection Commissioner John Dalli to act immediately against these unsafe and unlicensed fluorides.”