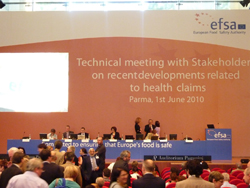 The EFSA bash in Parma

The European Food Safety Authority held a technical meeting with stakeholders close to their home base in Parma, northern Italy on 1 June 2010.

You can view EFSA’s information about the meeting, which includes links to the key presentations given. I’ll let you read the presentations, so will use this space to give more of a personal perspective.

You have to admit that EFSA, for all the criticisms thrown at it, know how to hold a good gig. In this particular case it involved hosting 250 vetted stakeholders with concerns over the highly controversial way in which Europe’s highest authority on food is evaluating health claims. They called the gig: “Technical Meeting wIth stakeholders on recent developments related to health claims”.

Evaluating health claims in itself might not seem such an important task, but coupled with the European Commission’s laws that will soon ban any type of claim made in any medium (yes, even verbal) if it isn’t specifically approved.

The building chosen by EFSA to host their 250 guests, including myself, was none other than a converted sugar factory, which now goes by the rather grand title of Auditorium Paganini in Parma. 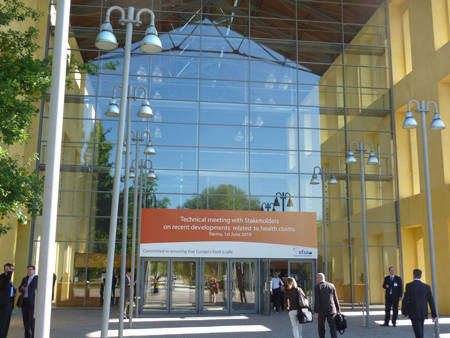 The important bits first; the food. It’s always interesting to see what an organisation that in theory has more knowledge than any other about food in Europe dishes up to its guests. At the first coffee break, I thought they might be trying to kill us off with a colon cancer or a heart attack or both. There was plate after plate of white bread, some of it quite sweet, loaded by the most famous product of the region, Parma ham. The problem for our vulnerable bodies is that most preserved hams are loaded with sodium nitrite and EFSA themselves have told us that diets high in preserved meats increase your colon cancer risk. The preservatives that keep the dead pig slices seemingly fresh, or at least pinky-red in colour, for weeks, can convert in your gut to nasty cancer promoters, nitrosamines. 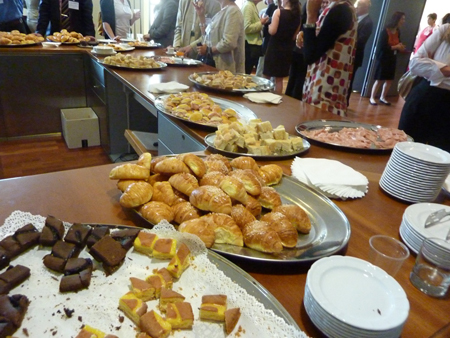 There were also acres of sweet pastries, all of which were intent on making us, the EFSA guests, obese. But by lunch, colour, variety and—frankly—a damn good spread, of local produce, with plenty of vegetarian options for the non-pig-eaters. Not bad at all. But that, unfortunately, was as good as it got.

I don’t think there were many who learned anything new of a technical nature. In fact, EFSA and the European Commission used the day to show us just how resolved they were at staying on their original track—the very track that has half of Europe’s food industry up in arms! So, if we did learn something, it was that there weren’t going to be any significant changes in the way in which EFSA’s going about evaluating claims. At least until there is a revolution, mass contravention of the regulation by the industry, or a legal challenge.

What the executive director of EFSA told us

Catherine Geslain-Lanéelle, as executive director of EFSA, opened the day’s meeting and for a minute it seemed she’d seen the light. She talked about the importance of nutrition and diet, as well as physical activity, on dealing with non-communicable (read: non-infectious; read: chronic, killer diseases like cancer, heart disease, obesity, diabetes and osteoporosis). Then the disappointment sears through your veins; you realise she’s just paraphrasing the WHO’s Global Strategy on Diet, Physical Activity and Health that is really rather a good strategy, let down only by the fact that loads of governments and health authorities seem to pay no more than lip service to it.

Then came the faux pas of the day! Dr Geslain- Lanéelle told her captive audience that their main purpose was to protect the European Commission. She was able to correct herself once the laughter had dissipated. She apparently meant to say ‘consumers’, but perhaps her subconscious mind was trying to reach out to us now that EFSA seem to be so keen to tell us just how transparent they’re being.

There was plenty of talk during the day about the fact that the whole exercise was really one of “learning by doing”. A number of speakers, including Basil Mathioudakis from the Commission, Dr Geslain- Lanéelle herself and Mella Frewen from the giant food and drink association, the Confederation of the Food and Drink Industries of the EU (CIAA), reminded the audience that it was obvious and understandable that the system would be imperfect at the outset as it was new for all parties.

Mella Frewen’s presentation brought the challenges to life. She told the audience that her association and its partners, The European Federation of Associations of Health Product Manufacturers (EHPM), the European Responsible Nutrition Alliance (ERNA) and the European Botanical Forum (EBF), which collaborated in compiling the first generic list of 776 health claims. Remarkably they did this before the Regulation came into force on 1 July 2007 and before they had so much as a jot of guidance from EFSA.

Frewen said that of the 523 claims evaluated in the first batch of claims, 91 of these were from their collaborative list. The result? Around 85% of them were given positive opinions. CIAA  and the European food industry were momentarily thinking this was actually what they had wanted — a common system of evaluating health claims that can be used EU wide. Several months later, the second batch was evaluated. CIAA’s success rate fell like a lead balloon to just 10%. The reason for this variation is much more related to the type of products, and how long they had been researched. So, in short, well studied nutrients like vitamins fared quite well, whereas more recent ones, especially those for which the science is emerging, simply get locked out!

EFSA officials, including Prof Albert Flynn of Cork University (Ireland) who acts as the Chair of the main evaluating panel, the panel on Dietetics Products, Nutrition and Allergies (NDA), the panel’s Head, Dr Julianne Kleiner and Prof Henk van Loveren, all sung from the same song sheets.

Why so many claims have been rejected

Four main reasons were given for the high rate of rejections of claims by EFSA:

Today—for any who might have had any doubts about the scale of the ramifications of EFSA’s approach—we see some of the clearest evidence of how this misshapen health claims regime in Europe will impact the ability to communicate meaningful information to consumers.

Today’s news from Nutraingredients is on glucosamine and chondroitin for use in joint health. Well, EFSA ruled negatively on allowing such claims, because most of the work has been done on subjects suffering osteoarthritis, particularly of the knee. As you’ll see above, unless you study a healthy population, and not a diseased one, your studies will be disallowed. During the EFSA meeting, EFSA’s NDA panel Vice-Chair, Prof Henk van Loveren said as much; the good professor made it quite clear that the EFSA remit prevented their use of studies on subjects with knee osteoarthritis.

So what is the industry meant to do? Take a bunch of healthy subjects with no symptoms of osteoarthitis and put them on glucosamine and chondroitin supplements for 20 years and see what the progression of the disease is after this kind of time period?

You have to be joking.

Too fishy for words

Patrick Coppens of the European Responsible Nutrition Alliance, a European trade body also representing natural health issues on behalf of some drug companies, made a good point. He explained that if the role of the regulation was to ensure that consumers were not misled, they should have simple claims. He then used an example presented by EFSA concerning health claims on fish. EFSA made it clear they wouldn’t accept a general claim that fish is good for you. EFSA said they want the claims to broken down to their constituent parts, each showing a particular functional or physiological relationship. Mr Coppens then made the all-important point that if you dissect the science on fish to its consituent parts, whether you’re looking at the omega-3 benefits, the protein benefits, vitamin D benefits, you almost certainly would not hit EFSA’s threshold of data required for health claims. The result? No claims can be made on the health benefits of fish. Shall we all then eat hamburgers and chips?

The view from EFSA

Okay, I might have been slightly tongue-in-cheek about certain aspects of the meeting, but that’s only because I, like so many others, was so deeply disappointed in EFSA’s lack of seeming understanding of the implications of what they are doing.

Catherine Geslain-Lanéelle opened the meeting taking about the importance of diet and physical activity on dealing with the major burden on European health care systems, namely chronic diseases such as cancer, heart disease, diabetes, obesity and osteoporosis—yet here we have a regulation that will give people less, not more, information about which foods and nutrients they can select to prevent or reduce disease.

And while they recognise the role of nutrition in disease prevention, the regulation explicitly prevents us from talking about it. That’s because it’s the sole domain of pharmaceutical drugs. Call it a stitch up if you like.

Here’s a link to EFSA’s briefing document for the meeting.

You can make up your own mind.