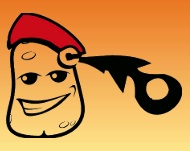 Polish people are passionately against GMOs

The International Coalition to Protect the Polish Countryside (ICPPC) is one of several Polish groups who are jointly organising a nationwide event in Poland this weekend, to protest against the newly introduced genetically modified potato.

‘The Great GM Free Potato Celebration’ will celebrate the humble and much loved potato, whilst highlighting the threat of contamination by the new GMO variety.

This new Amflora variety, developed by BASF, has recently been cleared for farming in the EU. Developed for industrial use, rather than for human consumption, this variety contains a highly controversial antibiotic resistant gene. Although Member States may choose for themselves whether to actually cultivate this GM variety, there is the risk of contamination of their potato food crops for those that do. Then, whether they want to or not, all Member States will be forced to accept trade in the produce!

Read more about the event in the following email received today from the International Coalition to Protect the Polish Countryside:

Danger on your Doorstep

‘Over 110 fires are being lit this week-end (9/10 October) all over Poland in "The Great GM Free Potato Celebration." Pots will be boiling and jacket potatoes baking as a symbolic reminder to the nation that our common potato is under threat from contamination by a newly introduced genetically modified potato variety. Also Poles living abroad are planning to organise special potato events.

Amflora has been developed in Germany by BASF and is already licensed for production in that Country. England is also trialling a GM potato under strict security conditions at Leeds in Yorkshire.

More than 70% of Europeans have already rejected GM foods, according to opinion polls.

The European Commission is currently looking for a way to de-regulate GM crop introduction within the EU. Under pressure from the World Trade Organisation, the Commission is hoping to devolve responsibility for licensing new GM varieties to member states.

"Allowing genetically modified potatoes out of the laboratory and into our fields is the height of irresponsibility and will lead to the cross contamination of the most widespread staple food in Europe." Said Sir Julian Rose, President of ICPPC.

"Countries are right to challenge the European Commission and Poland should be one of them. We are witnessing a dramatic erosion of our human rights to have free access to uncontaminated foods. Only an outright ban of GMO can save our food chain from becoming one vast experiment on human health." Said Jadwiga Lopata, laureat of Goldman Prize (ecological Nobel) and Vice President of ICPPC’.

Say No to GM campaign