Home News Morgellons/GMO link makes it into the news again 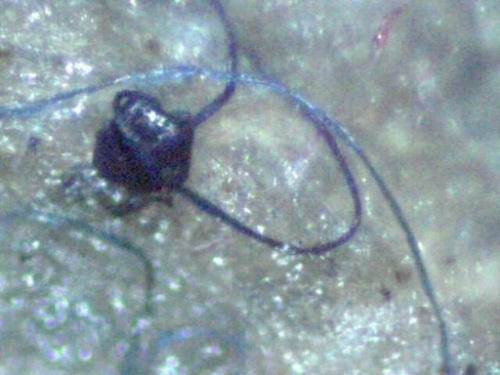 Morgellons/GMO link makes it into the news again

Never mind the disease, reading this alone is likely to make your skin crawl. For those that haven’t heard of Morgellons disease before, it is a disease that for many years was considered to have been invented by those who suffered from it and as a consequence they were treated with antipsychotics.

In 2008, the Centers for Disease Control and Prevention (CDC) in the US listed the symptoms of the disease as including “crawling, biting and stinging sensations; granules, threads [red, blue, black and white], fibers, or black speck-like materials on or beneath the skin, and/or skin lesions (e.g., rashes or sores). In addition to skin manifestations, some sufferers also report fatigue, mental confusion, short term memory loss, joint pain, and changes in visions.” However, they still described it as an “unexplained dermopathy (also called Morgellons)”.

The disease was brought to the public’s attention in 2001 by Mary Leitao who created a web site describing the illness in her young son. In 2002 she founded the Morgellons Research Foundation, a non-profit organisation dedicated to raising awareness and research funding for this poorly understood illness.

In January 2008 the CDC held a national media telebriefing announcing their efforts to launch a study on the unexplained illness, and in December 2008 issued a letter to medical associations. Under the slightly inappropriate heading “Updates – New” there is a Preliminary Report, dated November 2009, that fails to give anybody any useful information. Apart from these, there is nothing on their website to show they have released anything since.

This has to be frustrating for sufferers and those close to anyone that suffers from the disease, after all there had already been some interesting developments in research carried out by Vitaly Citovsky. His research found the pathogen Agrobacterium in all of his Morgellons sufferers and not in any of the control subjects. Just so that we are all clear: Agrobacterium “is capable of genetically transforming not only plants, but also other eukaryotic species, including human cells”, and is used in the production of some genetically modified organisms (GMOs).

Clearly under the watchful eye of the skeptics, in 2007 Citovsky asked Morgellons Watch, a site for skeptical analysis and discussion by Morgellons investigators, to post a note saying that his observations did “not imply that Agrobacterium causes Morgellons or that Morgellons is indeed an infectious disease. However, it does encourage future studies to determine (i) statistical significance of our data, (ii) whether or not Agrobacterium is not only present extracellularly, but also causes genetic transformation of the infected tissues, and (iii) whether or not infection of laboratory animals with Agrobacterium can recreate at least some symptoms of Morgellons.”

Citovsky's study may have been a small one, but as GMOs are being pushed – correction, shoved – upon us, doesn’t this warrant more research? Until Citovsky and his team made this connection, the genetic engineering community had assumed that Agrobacterium did not infect animal cells, and certainly would not transfer genes into them. Surely, in the interest of public health, this screams for more urgent attention.

The information available today is limited and does not provide an answer to what the causative agent of Morgellons could be. Looking at institutes that are researching it, research seems to be (very) quietly ongoing, or perhaps has ground to a halt. The most recent article that can be found talks about the symptoms and allows a few people to tell their personal, sometimes spine-tinglingly horrifying stories.

Wikipedia mentions that, after Citovsky found a link between Morgellons and Agorbacterium, “Dr. Randy Wymore from Oklahoma State University repeated the Agrobacterium study in 2010 and did not find DNA evidence from agrobacterium on any Morgellons patients.” It goes on to say that “Dr. Randy Wymore stated this at a 2010 "New Morgellons Order" Conference in Austin, TX.”  We have looked for this study and are unable to find it. However, the New Morgellons Order does exist, as there is another conference being held this year.

Dr. Randy Wymore is the Volunteer Director of the studies on Morgollens at Oklahoma State University and released a statement in July 2009. The statement concentrates on the symptoms, what he proposes to do and excuses as to why he hasn’t produced anything yet. He also talks in an interview, and only once does he mention the word ‘cause’. He again prevaricates on the symptoms, and the fact that the sufferers have always been thought of as psychotic.

He thankfully does comment that, as a population, the Morgellon sufferers have been treated poorly, and to finish off the interview he says that they need to be “diagnostically evaluated, take part in research and treated with respect”. Agreed, they probably would appreciate an evaluation of their debilitating disease and some respect, but if it were us, we’d want to know the ‘why’ so that we could stop it ever re-occurring.

Interestingly, the page on the Centre for Health Sciences does report on Dr. Wymore “hunting for the cause of the odd disease”, but still we get the impression the underlying aim is to find out how to treat it rather than how to prevent it. Another perfect example of the mainstream healthcare system losing its way and approaching it from the wrong angle.

Blog sites show postings from as early as 2006 of people believing that this is an attempt of Big Pharma to make us sick with GM food so that they can provide us with the medicine to cure it, and there are also postings citing an article written in Reuters in 2001 that starts to make a tenuous link between plant bacteria (Agrobacterium) and human health.

Monsanto has a track record of putting profit before public health. There was the infamous Agent Orange herbicide, blamed for widespread health problems during its use, the company operated a plant making polychlorinated biphenyls (PCBs), and more recently it has been criticized for its herbicide Roundup and development of Roundup-Ready seed varieties.

So, do you really trust that the Agrobacterium used to produce GMOs has been rigorously tested and proven safe for our consumption?