Marmite not banned in Denmark – just not specifically allowed!

No fortified food application for Marmite received by Danish authorities

No fortified food application for Marmite received by Danish authorities

As if to remind us of exactly how, well – ‘silly’ is the best word to describe it – European Union (EU) regulations on foods and vitamins have become, it was announced yesterday that the authorities in Denmark have decided that the widely loved/loathed yeast extract, Marmite, “could be illegal”.  Less sober sources than the BBC, including the Guardian newspaper, went further and announced that Denmark had banned the spread, and New Zealanders are up in arms as a direct result.  Protestors in Guernsey dressed up as Marmite jars in order to draw attention to the situation, in the context of an ongoing discussion in the Guernsey parliament over whether to introduce these very EU regulations to the island, not itself part of the EU.

So what’s really going on?  Is the Danish government really banning a harmless spread that contains high levels of B vitamins – purely because of the presence of those vitamins?

In fact, the situation with Marmite in Denmark is broadly the same as the situation with herbal medicinal products under the Traditional Herbal Medicinal Products Directive (THMPD), product-related health claims under the Nutrition and Health Claims Regulation (NHCR) and the ‘positive list’ of vitamins and minerals under the Food Supplements Directive (FSD).  Like all of these other regulations, Marmite in Denmark has fallen victim to pure Napoleonic law, whereby people are guilty until proven innocent and products are unable to be sold (i.e. are banned indirectly) unless specifically allowed.

A statement from the Danish Ministry of Foreign Affairs issued on 25th May states that “Neither Marmite nor Vegemite and similar products have been banned by the Danish Food And Veterinary Administration”, but goes on to say that foods fortified with vitamins or minerals “can not be marketed in Denmark unless approved by Danish food authorities”.

It’s interesting that the Danish authorities want to focus on whether or not the products have been legally banned, whereas from a consumer point of view, the matter of relevance is whether or not a product is available for sale. To be more transparent, perhaps the Danish government should be telling us succinctly what the situation is, such as: “We haven’t banned Marmite, but we are not currently allowing its sale.”

From Marmite to herbs….spot the difference!

The situation is exactly the same with manufactured herbal products under the THMPD, and is used by its fans to defend the Directive: the legislation doesn’t ban anything, guv’nor!  It’s just a licensing system!  But herbal medicinal products without a license are illegal to manufacture, if they can’t be sold as food supplements – so, to all extents and purposes, they are, er, banned.  Always bear this key fact in mind when you see similar arguments being made by regulators or their allied cheerleaders!

Could the vitamins in Marmite be harmful?

The Danish Veterinary and Food Administration is more specific, pointing out that fortified foods in Denmark are subject to the terms of Regulation No. 1925/2006.  Very much like the FSD, Article 3(1) of this Regulation enacts a ‘positive list’ of vitamins and minerals, and their specific formulations, that can be added to foods to fortify them.  Anything not on the list is not permissible as a fortifying agent, full stop.  In another strong echo of the FSD, Article 6 of Regulation 1925/2006 mandates that vitamins and minerals added to foods shall not exceed the forthcoming EU-wide maximum and minimum permitted levels.

In addition to the terms of Regulation 1925/2006, fortified foods in Denmark must also undergo pre-approval by the Danish Veterinary and Food Administration before they can be marketed, according to the Danish Order on food additives.  The approval process risk assessment that uses calculations based on the “upper tolerable levels established by international scientific bodies and available data from national scientific surveys…the Danish method for conducting the risk assessment…has been published in the European Journal of Nutrition, October 2005”.

If we look at the paper in question, we find that the methodology employed by the authors, and by the Danish authorities, is flawed in a similar manner to the risk-assessment methods currently used by the EU to determine maximum permitted levels (MPLs) of vitamins and minerals in food supplements.  In short, in a misguided attempt to prevent adverse events in 95% of the population, including children, it examines the risks of micronutrient intake among the age groups most likely to experience adverse events in the first place.  Unsurprisingly, their model produces some very low maximum allowable levels of intake from fortified foods: the figure for vitamin C, for example, is only 230 mg/day, or 84 mg vitamin C added per 100 kcal in a diet consisting of 25% fortified foods.  One average orange contains around 70 mg of vitamin C, so anyone eating four oranges in a day would exceed this level easily.

The truth is, the Danish authorities really don’t like fortified foods!  In 2004, for example, they denied a license to an enriched version of Kellogg’s Cornflakes, because of their opinion that, “They will have toxic effects in the doses Kellogg uses”.  Given this, we can speculate that any application from Marmite’s manufacturer, Unilever, for a fortified food approval has a high chance of being rejected on similar grounds.  So as an intellectual exercise, we have prepared a table of the micronutrient content of Marmite, to show just how risky the average serving can be. 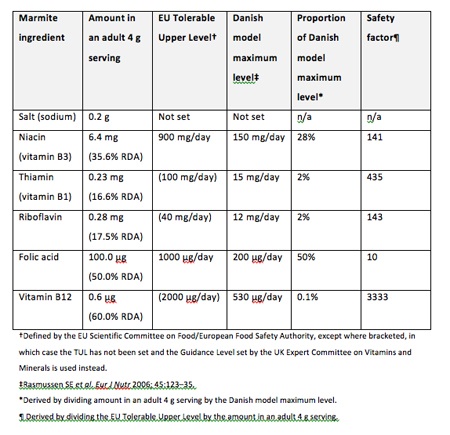 To reach the Danish model’s maximum level of intake for its micronutrients, an enthusiastic Marmite lover would have to eat at least 23 servings per day of 4 g each!  Which would probably damage his or her relationship with Marmite permanently.  Only the folic acid level is likely to raise the eyebrows of a Danish regulator, because a 4g serving brings the level to 50% of the oppressively low 200 μg/day maximum level set by Rasmussen and colleagues.  But to look at safety, it’s actually more relevant to compare the levels with those agreed by the European Food Safety Authority, which we have argued in the journal Toxicology, are far too low already.  Nonetheless, we have used these levels to calculate a ‘safety factor’ (see right hand column of table).  You start to see a profile that could hardly be described as unsafe, the ‘safety factor’ ranging from 10 to 3,333-fold, depending on the vitamin!

For far more detail on the issues surrounding faulty risk assessment of micronutrients by Codex, US and EU regulators, please visit our Good Science campaign pages, particularly the two articles in Toxicology published by our own Dr Robert Verkerk.

What we find so hypocritical is the way in which governments can on one hand scream about dangerous nutrients, and on the other hand be perfectly tolerant of foods for which there is copious evidence of lack of safety.  Check out our Say NO to GM campaign, for example, to see why we’re concerned about genetically modified foods.

But closer to home, what about Danish bacon?  Would the Danish authorities really be turning a blind eye to all that sodium nitrite preservative in Danish bacon that has been shown to convert to N-nitroso compounds in the gut and likely contribute to increased rates of colon cancer?  Here are some studies and reports for your consideration.  You can then decide if the Danish authorities have got their safety priorities the right way around.