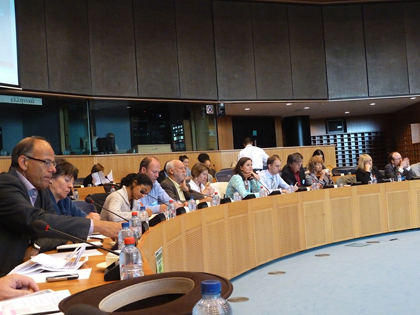 The millions of European Union (EU) citizens eagerly awaiting much-needed clarification from the European Commission over the Traditional Herbal Medicinal Products Directive (THMPD) had high hopes for a meeting in the European Parliament on Tuesday, 21st June 2011 (you can access an archived video stream of the event here).  Unfortunately, despite a meeting format ideally designed to tease out answers, the assembled representatives of the European Commission (EC) and the European Medicines Agency (EMA) failed spectacularly to dispel the widespread confusion.

The meeting’s organisers, Michèle Rivasi and her colleagues in the Greens/European Free Alliance (EFA) group, must be congratulated in their attempts to provide a workable forum for questioning members of the EC.  After two short presentations by French lawyer Isabelle Robard and Dr Andrezj Rys, Head of Health Systems and Products for the EC, the rest of the 3-hour meeting was free for questioning by a large group of concerned interested parties from across the EU, plus an expert panel that included Dr Robert Verkerk, executive & scientific director, ANH-Intl.  Questions were split into three sections: implementation of the THMPD, concerns about the Directive and potential ways of revising it. 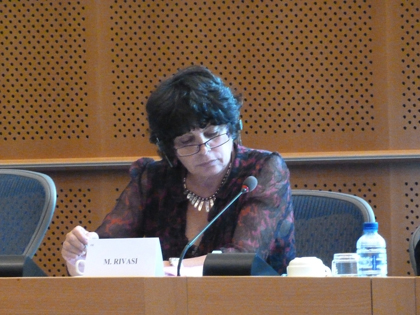 Prior to the meeting, ANH-Intl developed a list of questions that we circulated to the organisers and key stakeholders.  Dr Verkerk kicked off by asking the first question.  He explained that on 13th April 2011, Commissioner John Dalli wrote in a letter to Giles Chichester MEP that herbal medicinal products would require full marketing authorisation until the THMPD was adopted.  “Given that most traditional Chinese medicine (TCM), Ayurvedic, Amazonian and other products will be medicinal by function under the terms of [the THMPD]”, asked Dr Verkerk, “Does it mean that such products not subject to a full marketing authorisation were already illegal prior to full implementation of the THMPD on 1st May 2011?”

The answer from Maria Figuerola Santos, on behalf of the EC, was a portent of things to come: “For [herbal medicinal products] that were on the market before 2004, they may be legally on the market of EU Member [States] according to the specific rules of each EU Member [State]. For those that were not on the market before 2004…as medicinal products they were illegal, because the [THMPD] applies to all registrations since 2004. [At the end of the transitional period], the new rules apply.” However, she continued, products sold as foods or food supplements “cannot be medicinal by function” – even though the expanded definition of a medicine effectively makes all foods used specifically for healthcare purposes medicines, since all foods have either immunological or metabolic actions!  So: the EU has given Member States a tool that is lethal to herbal medicinal products that are incapable of traversing the THMPD’s convoluted access requirements. 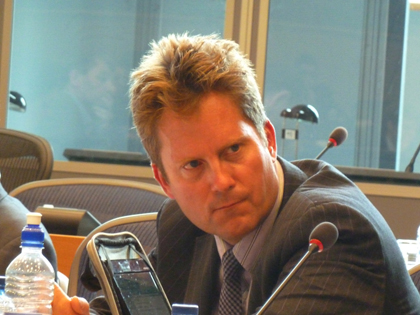 Blaming Member States, as opposed to EU legislation for problems associated with the THMPD, rapidly became a common thread of the Commission’s responses.  Ms Figuerola Santos appeared determined not to accept that it is the adoption and accurate implementation of European law that makes Member State legislation highly problematic for herbal products, particularly non-European herbal products.  In the second session, on concerns about the THMPD, Penny Viner, Chair of the UK Herbal Forum, asked whether it remains possible to market an herbal product as a food supplement if it has an approved EU monograph.  The answer: it’s up to Member States to decide, on a case-by-case basis.  Member States are, according to the EC and EMA, largely responsible for deciding what constitutes an ‘industrially manufactured’ herbal product.  It’s therefore up to Member States whether they consider particular types of herbal product as medicines and regulate them as such.  And so on.  So much for one of the most important guiding principles of European law: the free movement of goods within the EU. 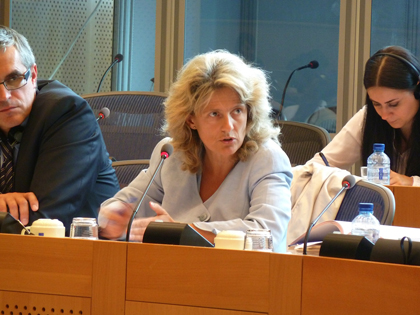 Passing the buck seems to have become the modus operandi.  Member States say there is nothing they can do, as they are compelled to follow European law.  At the same time, the European Commission insists that Member States have autonomy as to what is considered a medicinal product, but – according to Commission representative Figuerola Santos – they must be guided by the European Court of Justice.  Well, at least we received confirmation that our intention to take our case to Luxembourg is undoubtedly the way forward!

For the time being, however, confusion reigns: not only among stakeholders, but also among Member States and, crucially, at the EC/EMA as well.

We have many and serious concerns about the THMPD, along with definite ideas as how best to reform it, and Dr Verkerk covered several issues in one question: “Chinese and Indian medicines are not getting through the door…these products, demanded by millions of European consumers, are falling between the various [EU] regulatory regimes. If the aim is really to protect consumers, what are we doing here with a system that is clearly not working?  A very specific type of herbal medicine is successfully getting traditional use registrations. These tend to be pretty isolated chemistries that are removed by alcohol or acetone extraction, stabilised in a pharmaceutical base, often with some synthetic polymers and preservatives…We see the HMPC monograph list not representing these traditions…[Currently] companies are being told their products are medicines, they haven’t got through the THMPD door and their products are now illegal.”

Cue a very long pause. Ms Figuerola Santos eventually regurgitated Commissioner Dalli’s clearly misplaced view that, “This Directive doesn’t make any additional hurdles for Indian or Chinese medicines”.  Statements like this are ridiculous in the face of the facts available, as laid out in Dr Verkerk’s question.  Or indeed, by the findings of the EMA’s June 2011 report on uptake of the registration scheme.  She went on to explain that the reason the EC’s own 2008 experience report described the THMPD as “not appropriate” for holistic traditions was that, “Pharmaceutical legislation, including the [THMPD], regulates…only medicinal products. It doesn’t regulate traditions or the holistic approach…If we really want to look at these traditions taking into account the whole holistic approach, we need something different.”  Finally, something we can agree on! 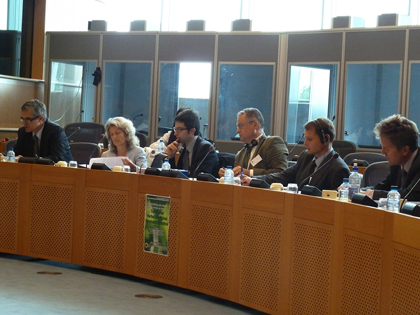 The EC will not revise the THMPD

Ms Figuerola Santos later said that the Commission is “open to reason” with regard to developing a new Directive specifically for holistic traditions.  Our friends at Save Natural Health and Avaaz used the meeting to present the Commission with four petitions, comprising over 900,000 signatures, from people who would dearly like to see a proportionate, just, transparent and accessible Directive for these traditions!  These petitions are still open, by the way, so if you have not signed them, please do so and help to keep the pressure on the EU.  However, the EC confirmed that it presently has no intention of revisiting the THMPD itself, although it may, after an unstated period of time, consider extending its scope to cover traditional products containing non-herbal ingredients, such as minerals or animal products (e.g. shells, ghee, etc.).

The luxury of time

But how many businesses will fold while the EC gains more experience with the Directive?  This issue was raised by Chris Dhaenens of the European Benefyt Foundation, and a member of the Belgian Plant Commission.  While the EC looks at whether the THMPD is working, said Mr Dhaenens, “Companies, especially TCM and Ayurvedic companies, are suffering financially…because they find themselves illegal by default”. Many countries operate positive list systems, he continued, but the lists in most Member States are not sufficiently extensive to provide a workable fraction of the pharmacopoeia to permit the effective practise of TCM or Ayurveda.  Purely in terms of public safety, methods of preparing herbs that are outside their traditional context – by extracting active principles using alcohol or acetone, for example – actually “…create a bigger safety problem than before.”  In fact, these types of preparations, added Mr Dhaenens, don’t even comply with the traditional indications on which they rely.  Focusing on biomarkers or active principles as measures of efficacy, stability and safety is also misguided, according to Mr Dhaenens.  “In Switzerland, the total spectrum of the plant is the marker. This gives you a more cost-effective method and a better descriptive idea of the plant.”

Finally, Mr Dhaenens cited the Belgian ‘Aristolochia case’, where non-traditional use (including the concomitant use of pharmaceutical drugs) of the Chinese herb Aristolochia fangchi by orthodox medics caused 135 cases of irreversible kidney damage, and in some cases carcinoma. “Everything regarding this sad case is an illustration of ‘do not use herbs outside their context’!” he explained. “I defy you to find me one case of nephrotoxicity when Aristolochia was used [in its traditional context] as a watery decoction…There was a lot of scientific fraud involved.”

Many of the interested parties present left the meeting with two overwhelming feelings: disappointment that the Commission and EMA failed to answer any questions clearly and in detail, and a grain of hope that, at least, the EC might consider a new legislative regime for holistic traditions if the European Parliament and Member States demand it.  No-one beyond the EC and EMA seemed to think that products from non-European systems are not facing a significant set of problems.  Of course, public demand already exists in huge measure, but can you, for example, see the German and French governments becoming advocates of such a new regime? 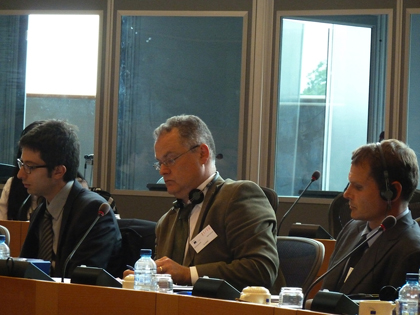 For ANH-Intl, the meeting confirmed more than ever that judicial review proceedings are the best, and in fact the only realistic, way forward at this point.  A successful hearing in the European Court of Justice in Luxembourg will help forge an EU regulatory system that allows diverse and contrasting systems of Eastern and Western healthcare to thrive alongside one another — while helping to preserve our fundamental right to choose how we manage our health.  Let’s get our heads down, put some serious intent into this mission and bring the change we want to see!

Invitees to the meeting were:

For the European Commission:

For the European Medicines Agency: