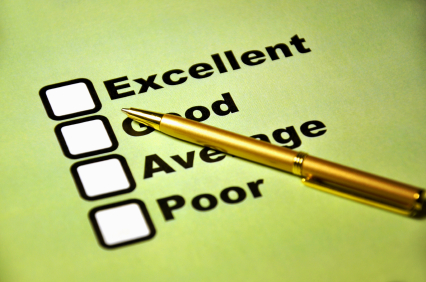 Over 2 months into the era of the Traditional Herbal Medicinal Products Directive (THMPD), the European Medicines Agency (EMA) has released its first report looking at herbal products granted registration under the THMPD scheme across Europe.

The report is the first to be released as part of the EMA’s 6-monthly commitment to keep interested parties up-to-date as part of the 2010–11 Action Plan for Herbal Medicines.  The report covers traditional use registrations (TURs) prior to a cut-off date of 31 December 2010. A forthcoming report, due in July this year, will cover herbal medicines with full marketing authorisations granted on the basis of ‘well-established use’ provisions.

Number of registrations granted across Europe 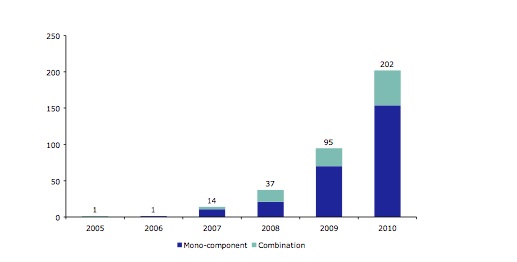 Figure 1 from the EMA report. Number of traditional use restrictions (TUR) in the EU grouped by year of registration for mono-component and combination products (2005-2010; total 350).

Member State competent authorities had received a total of 1351 TUR applications by the end of 2010, 898 of which remain under assessment. With 83, the UK was way out in front in terms of TURs granted compared with its nearest rivals, Poland with 60 and Germany with 58. Only 53 had been refused, the vast majority of these (33) by one country, Germany; the next-highest numbers of refusals came from Greece and Lithuania, with 5 each.

Please help us fill in the blanks!

We can only speculate as to why Germany is refusing so many more TUR applications than anywhere else.  However, it appears increasingly likely that Germany is operating a dual-track system, under which products that were granted medicinal licenses through German national laws prior to 1994 – a system with a very 'light' data requirement – have been swept through the TUR process. Other products, it seems, must undergo much tighter scrutiny and testing requirements, and these are among the ones being rejected. Whichever way you look at it, it is products from the German phytopharmaceutical tradition, characterised by companies like Schwabe Pharma and Bionorica, that have been getting their licenses. These products are nearly always alcohol extracts of single herbs or very limited combinations, which are stabilised in a synthetic, pharmaceutical base.  To describe such products as 'natural' would be stretching the meaning of the term to its limits.

If you are reading this and you happen to be a representative of a German herbal product manufacturer whose company has been refused a TUR by the authorities, we would dearly love to hear from you so we can understand better the reasons for your rejection(s).

Unsurprisingly, given the difficulty of obtaining stability data based on single biomarkers for polyherbal products, far more single-herb than polyherbal products had been granted TURs by the end of 2010, at 260 versus 93, respectively, giving a total of 353. Didn’t we say 359 earlier? Yes, we did, but it appears from the report that TURs without a date of registration may have been excluded from the data. 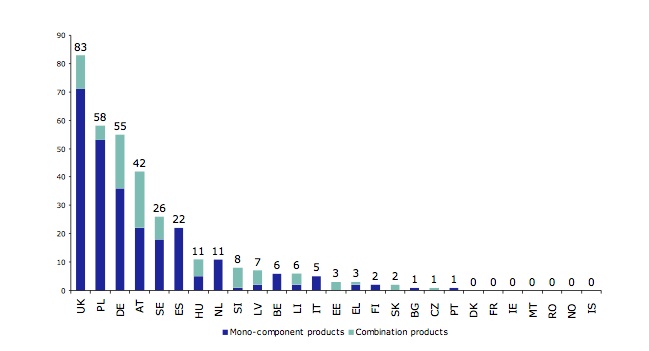 Again, the UK had approved the most polyherbal products, with 83; Poland was next with 58, followed by Germany with 55 (see figure 3 above). The numbers of herbs in approved polyherbal products are revealing, however. Of the 93 polyherbal products with TURs, 61 (66%) contain only 2 or 3 herbs; 8 products contain 4 herbs, 12 contain 5–10 herbs, 4 contain 10–20 herbs and only 1 has over 20 herbs. This picture is only to be expected, given that no herbal products associated with the great Asian traditions of Ayurveda or traditional Chinese medicine – which overwhelmingly rely on highly complex, polyherbal formulae – have been granted TURs. In fact, we are surprised to see any TUR-approved products with 10–20 herbs, let alone more than 20! We think the explanation is quite simple, though: in some EU Member States, a limited number of polyherbal products containing high numbers of Western herbs have been on sale for many years, meaning there are plenty of data available to support TUR applications.

In total, 85 herbal species had been used as the basis for single-herb products granted TURs by the end of 2010. The root of Pelargonium species, or scented geranium, used for symptomatic treatment of the common cold according to its EU Community monograph was the basis of 29 approved products, making it the most frequently utilised herb on the list.

Other single herbs, such as valerian and echinacea, make up around 30% of the TUR-approved herbal products in the UK – although obviously this includes polyherbal products not included in the EMA report. At an EU level, valerian and echinacea are actually way down the list (bearing in mind that this report only covers to the end of December 2010), with 13 and 8 approved products, respectively. The other ‘top 5’ herbal species are Hypericum (St John’s wort), Harpagophytum (devil’s claw) and Passiflora (passion flower). 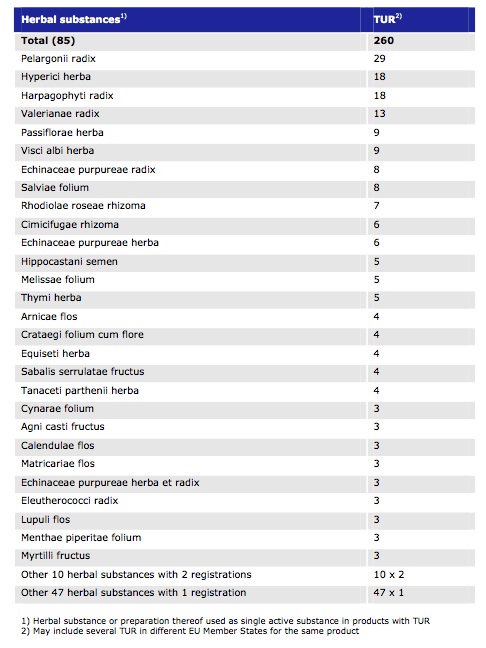 Table 2 from the EMA report. Number of TUR in the EU by 31 December 2010 for herbal substances used in mono-component products.

The final data table concerns the therapeutic indications addressed by the TUR-approved herbal products. In a sign of the times, the greatest number of indications has so far been granted for ‘mental stress and mood disorders’, with 80 products in total. 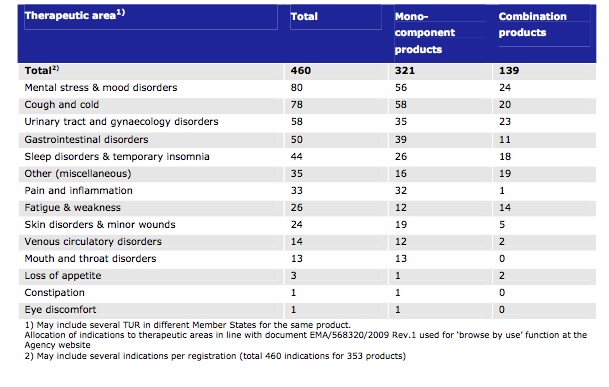 Table 3 from the EMA report. Number of indications granted in TUR grouped by therapeutic areas.

Interestingly, there are 460 indications for 353 products, meaning that some approved herbal products have multiple indications. Unfortunately, the report does not elaborate on which herbal species may be involved or which therapy areas they cover.

We hate to say, “We told you so!”, but these results confirm in black-and-white many of the THMPD’s fundamental flaws and limitations. Across 27 Member States, in European countries that use hundreds – if not thousands – of herbal species as the basis of traditional medicinal systems, a mere 83 species are used as the basis for products registered until the end of December 2010. All of these species are European herbs.  This means, unless a given Member State is prepared to exempt a herb from medicinal licensing – as is being considered under the proposed statutory regulation of herbalists in the UK – or the form of the herb delivered to consumers is regarded as a food or food supplement, all herbs associated with the great non-European traditions become illegal in the EU. This includes includes Ayurveda, TCM and all African and south American traditions. Relatively, very few polyherbal products are being registered, with fewer registrations seen as product complexity increases.

What is just as tragic, however, is a list of therapeutic indications for herbal products that is incredibly short and highly restricted. Without any attempt to justify itself, the THMPD restricts indications for herbal products to minor, self-limiting conditions.  This leaves us with the brisk shopping list of therapy areas revealed in the EMA report, and serves as a stark reminder that the THMPD threatens to leave herbal medicine as a stunted remnant of the glorious traditions that have served humanity so well for so long.

Remember: of all the EU Member States, it is currently only the UK government that is planning to officially recognise herbal medicine as a profession. In most Member States, these products are the only herbal medicines easily and legally accessible by the public. We believe this attack on freedom of choice and self-determination in healthcare is wrong.

Please support our legal challenge and get behind the only realistic option to safeguard herbal medicine for future generations in Europe!

Write to your MEP and point out that the officially published EMA figures show that the THR scheme is flawed in the ways described above! This report gives us black and white proof that many of the THMPD's problems, highlighted in the past by ANH-Intl, are becoming reality. Help to make sure that the EU legislators know how strongly the public wants the THMPD to be revisited. Keep up the pressure for change!