Home News Does GM spell the end for our glorious Monarch? 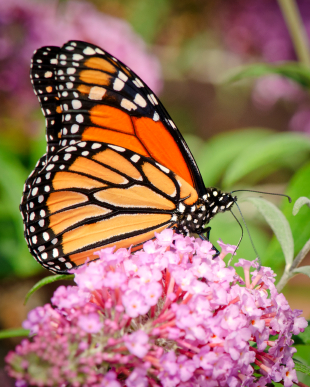 Does GM spell the end for our glorious Monarch?


Butterfly species threatened by both glyphosate and Bt

The Monarch butterfly (Danaus plexippus) is perhaps the best-known of all North American butterflies, is also native to several European countries and occasionally migrates as far as Western Europe. Unfortunately, thanks to a double-whammy courtesy of genetic modification (GM), its days may be numbered.

Take action now by expressing your feelings on this crucial issue to your democratic representatives!

The Monarch butterfly is a beautiful creature with an easily recognisable orange and black wing pattern, and is famous for its migration between Canada, Mexico and Baja California that spans the life of three to four generations of the butterfly. As a ‘milkweed’ butterfly, the Monarch relies on common milkweed (Asclepias spp.) for food and habitat, but this plant species is under enormous threat from the increasing use of glyphosate herbicide on Monsanto’s Roundup Ready GM crops.

Getting to the Hartzler of the matter

Bob Hartzler, a weed specialist from Iowa State University, USA, discovered that milkweed numbers suffered following the introduction of Roundup Ready crops, and consequently the use of glyphosate [1]. Fewer milkweed plants means less Monarch butterflies, and unless milkweed is specifically planted elsewhere to provide food for the caterpillars that become Monarchs, their numbers will continue to decrease.

Although Hartzler’s research looked specifically at Iowa, he believes that the decline in common milkweed he observed in Iowan corn and bean fields could reduce Monarch butterfly reproduction in any location with similar cropping patterns.

He's not the only one who is worried.  A study recently published in the journal Insect Conservation and Diversity [2] also shows that increased use of glyphosate herbicide with Roundup Ready GM crops in the North American Midwest is killing milkweed plants. The paper explores other factors contributing to declining Monarch populations, such as deforestation in Mexico, but co-author Chip Taylor, from the University of Kansas, says the rapid increase in numbers of Roundup Ready crops and consequent glyphosate overuse is the major cause. “It’s hard to deny the conclusion,” says Taylor, who has been warning of the negative effects of GM crops since 2001.

Unfortunately, the problems posed by GM crops for the Monarch don’t end with glyphosate. The presence in corn of Bacillus thuringiensis (Bt) toxin, which is added by biotechnology companies to make the crop resistant to the European corn borer, is similarly deadly to Monarch larvae.  A 1999 study by John Losey [3] and a later paper by researchers at Iowa State University [4] both showed that Bt corn pollen was lethal to the larvae.

The combined effects of Bt and glyphosate represent a tragic pincer movement by GM technology, which threatens to decimate Monarch populations wherever it is used. “It [glyphosate] kills everything.   It’s biodiversity Armageddon,” said Lincoln P. Brower, an entomologist at Sweet Briar College and one of Taylor’s co-authors.

This is devastating news that further highlights how modern, industrial agricultural practice is destroying both flora and fauna. We totally agree with Brower when he says, “It’s atrocious what’s going on, and it’s very easy for the biotechnology companies like Monsanto to propagandize and mislead the public.” With mainstream media singing from the same hymn sheet on the subject, it’s easy to lap up the wonderful, positive press about GM crops and how they will save the world. The truth, however, is slowly coming out, and is very different: GM crops are harmful to both humans and the environment, in many different ways.