Home News Caesarean sections to be ‘on demand’ in UK 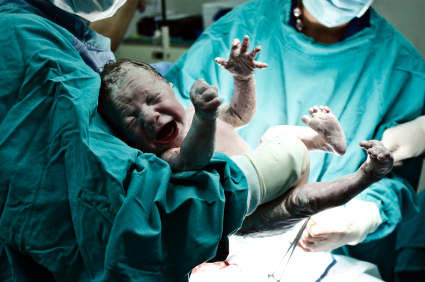 Caesarean sections to be ‘on demand’ in UK

Is medical science trying once again to usurp nature?

How much of this change in procedure is dictated by doctors’ convenience and immunity from lawsuits?

This week saw lurid news headlines suggesting that all pregnant women in the UK are to be allowed the choice of a Caesarean section (C-section) instead of a vaginal delivery. A change in the UK’s National Institute for health and Clinical Excellence (NICE) guidelines is responsible for this, frankly terrifying, move. Yet more evidence of conventional medicine trying to play God? If Mother Nature got it so wrong, one wonders how have we managed so successfully to reach the current population crisis?

The question of whether C-sections should be more widely available is an important one for every woman of childbearing age, whether already pregnant or with even vague intentions of having a child.  If this is you, we suggest you get fully informed so you can make the right choice for you and your baby!

As reported in the UK’s Daily Mail, “The [National Health Service (NHS)] will be told to make the operation available even to women who are capable of giving birth naturally. Previously, women were often allowed caesareans in NHS hospitals only if they were medically necessary.” Consultant Dr Bryan Beattie, who helped to draw up the existing NICE guidelines, explained that wondrous advances in surgery are responsible for the shift in attitude: “Ten or 15 years ago there may have been a better argument for saying no, but caesarean sections have become much safer. We have closed the gap to the extent that you really do have to bring in maternal choice as part of the decision-making process.”

But what about the increased costs? According to the NHS Tariff 2010–11, a C-section costs from £2,359 to £3,311 depending on the age of the mother and the presence of complications; by contrast, a normal delivery costs £1,324–1,393. That’s around an extra £1,000 per delivery — an extra cost burden the NHS can ill afford in the current climate. An odd decision in an era of austerity and cost-cutting.

Both the NHS website and the Royal College of Gynaecologists and Obstetricians take a similar line and are trying to market the idea under the banner of increased maternal choice.

Too posh to push, or just ‘defensive medicine’?

Despite the advances in medicine, what about the increased risks of having major abdominal surgery on a whim, or denying women the most primordial rite of passage since time immemorial?  And what about the future, long-term health of the baby that, through no choice of his or her own, is brought into the world via an unfamiliar route?

While supporters of the move will say that women still have a choice, we all know just how powerful is the influence of celebrities and others perceived as ‘too posh to push’. Or are doctors and hospitals choosing a quicker option (30 mins versus hours) that may give added protection from potential lawsuits when normal deliveries go wrong?

The risks and potential consequences

All too often, C-section is seen as the easy alternative that retains one’s figure and pelvic floor muscles, but we don’t see anyone talking about the consequences to mother and baby. In fact, even this view of cosmetic advantages is misplaced.  How much do we hear from the authorities about the famous C-section ledge, which prevents a good many C-section mothers from ever wearing a bikini again?  What about permanent pain associated with the C-section scar, or permanent and irreparable abdominal muscle damage?  There’s also the lower, but real, risk of scar or uterine rupture.  Which health authority talks about the fact that C-section babies might have permanently compromised immune systems?  Let’s face it, the consequences of a C-section, or worse still, multiple C-sections, can be very long term and even permanent. Unless of course you have the money for the tummy tuck, liposuction and other repair work that may have to be done.

The procedure is not a minor operation. It’s a major procedure, involving cutting through the mother’s abdomen, through the abdominal muscles and then the uterus to remove the baby. Physical recovery takes several months, and both the risk of complications and the chance of needing a C-section at subsequent births are increased.

Research shows that babies born via C-sections are twice as likely to be transferred to neonatal intensive care compared with normal delivery. But from a psychosocial perspective, C-section mothers, compared with mothers who delivered vaginally:

These are not consequences to be swept under the carpet. Many of them will lead to life-long effects, most of them adverse – if not all of them.

The guts of the problem

Around 70% of our immune system resides in our gut, so a healthy, optimally functioning gut is central to maintaining robust health throughout life. The lion’s share of the colonisation of an infant gut takes place through vaginal delivery. It’s not new knowledge that important determinants of the gut microbiotic composition are the mode of delivery, the type of feeding, gestational age, infant hospitalisation, and antibiotic use.  A Dutch study published in the journal Pediatrics showed that full-term babies who were born vaginally at home and were exclusively breastfed seemed to have the most beneficial gut microbiota. The Dutch have always understood the value of home births and natural deliveries, having one of the highest rates in the Western world.  No surprise, then, that the most effective way to ensure good health throughout life is a natural birth, the way nature intended. Surely if there is no need for medical intervention, this should be the first option for mother and baby?

NICE shows us that prospective mothers cannot rely on care providers to give them a genuinely informed choice with C-sections. Before going down the route of a surgical birth, make sure you look at the research, as well as the options.  Childbirth Connection is a good place to start. Janet Balaskas, the founder of the active birth concept, knows more than most about the value of active, natural birth: check out the Active Birth Centre for more information.

Whatever you decide, make sure it’s the right thing for you and your baby, and that you feel you’ve had sufficient information to properly appraise the pros and cons of all the various options.