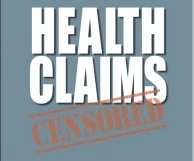 As citizens and businesses across Europe await with bated breath the effects of implementing the 222-strong ‘Community list’ of approved health claims — alongside a corresponding ban on thousands of others — Dutch investigative journalist Bert Schwitters drops a carefully timed bombshell. The bombshell takes the form of his new book, Health Claims Censored, which puts the Nutrition and Health Claims Regulation (NHCR; No. 1924/2006) under the microscope.

Back in the year 2000, the European Commission (EC) took the Republic of Austria to the European Court of Justice (ECJ) over a system governing health claims on food products, stating that, “A general prohibition on health-related statements with regard to foods and food products is not justified”. Under the Austrian system, all health claims had to be pre-approved by the authorities before manufacturers could use them.

Fast forward to 2012, and the EC is crowing loudly over its latest victory. After more than 6 years of wrangling and controversy, the obedient European Parliament has finally voted through a ‘Community list’ of 222 health claims on foods and food ingredients that have been approved by the European Food Safety Authority (EFSA). This was done in spite of the fact that many MEPs were aware of grave problems associated with the Regulation and its implementation. But, somehow, they felt the problems could be fixed at some later date. When the list becomes law in less than 6 months, these authorised claims will become the only ones that manufacturers can legally use on their products throughout the EU, other than those that still benefit from the transitional measures.

Spot the difference! Clearly, the EC has forced through legislation that is virtually identical in scope to the Austrian system that it had previously challenged in court. And if this 180-degree about turn sounds illogical and inconsistent to you – and it should – then you ain’t heard nothing yet! Bert Schwitters’ new book, Health Claims Censored, takes a forensic look at the NHCR and its implications. And it’s not a pretty picture.

Mr Schwitters has done a painstaking and admirable job of deconstructing the NHCR in all its facets: its legal history, inconsistencies, deceptions and often-ominous implications. One of his major contentions is that, although the NHCR is presented as consumer protection legislation, the Regulation is actually an instrument of public health policy. Schwitters makes the distinction between ‘public’ communications from authorities such as member state governments or the EC, and ‘private’ communications from business operators. Coming from the former, information about health and health protection is classed as public health messages, while the same topics — and even the very same messages — would be classified as consumer protection measures when distributed by private business.

“Even though business operators provided the scientific information supporting the claims,” Schwitters points out, “...the claim becomes legitimate only after its adoption by the [EC]”. This amounts to, “An expropriation of food business operators...ownership of intellectual property, seized without due monetary compensation and without the owner’s consent.” And to top it off, EFSA is a “public affair” publishing scientific opinions for the EC that “are of a genuinely public nature” – none of which we would contest, except maybe for his assertion that, “[EFSA’s rules] impose strict rules to guarantee the independence of EFSA’s board and collaborators in the public interest”.

Realising that the NHCR is a public health instrument is vitally important, says Schwitters, because one can then appreciate it as a weapon of what he terms the “European oligarchy”. “This self-appointed elite,” he goes on, “Is not in the least interested...in...individual welfare...[or] in empowering individual choice. It seeks to dictate social choice. When it speaks of “dietary choices”, it means the choices made by the European institutions for you not by you.” In this, Schwitters is undoubtedly correct, as even a brief comparison of EU nutritional advice with current science will reveal.

So, as an instrument of public health policy, what is the NHCR and its wizened little list of EFSA-approved ‘authorised health claims’ meant to protect us against? For Schwitters, it is, “The conjured uncertain risk that children and adolescents who consume undesirable foods in moderation would be seduced to consume immoderate quantities of such foods, if these foods were to carry nutrition and/or health claims.” Never mind the research showing that, “Providing information about healthy and unhealthy food actually decreased the number of people selecting the healthier...option”. After sifting the multiple regulatory and legal layers that comprise and surround the NHCR, this, says Schwitters, is the EC’s paltry justification for denying us free speech in nutrition.

A word about science

But what of the science? Requiring, as does Recital 26 of the NHCR, “A scientific assessment of the highest possible standard” certainly gets the EC off the hook when EFSA’s assessments are criticised, as we have seen. Ironically, however, as Schwitters acknowledges, “An assessment of the highest possible standard...should allow for the making of probability statements: probable and possible”. Grading health claims according to the level of evidence, from ‘convincing’ to ‘insufficient’, would both provide the consumer with more useful information while recognising that science – and especially nutritional science – is not set in stone, by allowing movement between the grades. This position has long been supported by ANH-Intl.

ANH and the ‘food supplements’ case

It’s impossible not to be impressed with the level of research and analysis that has gone into Health Claims Censored. Since Schwitters’ describes investigative journalism as his “first love”, it’s less surprising that this former owner and manager of food supplement companies has examined the NHCR’s every component with a jeweller’s precision. He’s particularly strong on the so-called ‘precautionary principle’ and its pernicious influence on free speech via the NHCR.

Having said that, we were a little surprised that Mr Schwitters overlooked the ‘Damgaard case’, since it is crucial to understanding the scope of commercial speech as well as ECJ case law on the restriction of freedom of speech by journalists reporting on natural health products.

We also question Mr Schwitters’ interpretation of the outcome of the joined ECJ Cases C-154/04 and C-155/04, in which the claimant – a certain Alliance for Natural Health – questioned the validity of the EU’s Food Supplements Directive (FSD; 2002/46/EC). According to Schwitters, the ECJ’s judgement in the case enabled the EC to legislate to harmonise member state laws on consumer protection via Article 95 of the Treaty of the European Commission. For Schwitters, this was a necessary and distinct stepping stone on the path to the NHCR.

However, the interpretation of our lawyers was rather different. Paragraph 73 of the ECJ’s ruling was the ECJ’s attempt to offer a partial solution to the perceived difficulties in getting new vitamins and minerals onto the FSD’s ‘positive list’. By clarifying the requirements for applicants, as well as placing the burden on governments to prove lack of safety if rejecting an application, it should make it considerably easier for substances to be added to the ‘positive list’. The ECJ found this approach preferable to annulling the entire Directive, given the likelihood that this some member states, like Germany and Denmark, would subsequently have ‘medicalised’ many supplements.

As a businessman, Mr Schwitters has clearly suffered as a result of European legislation and its frequently unreasonable treatment of small- to medium-sized enterprises, and a powerful distrust of the EU, EC and ECJ seeps from the pages of his book. It is, therefore, something of a surprise that his proposed solution to the problem – “[the] one way to lift the tombstone and bring the knowledge buried underneath it back” – is to file a complaint at the ECJ! Needs must when the devil drives, as they say.

We would go a little further than Mr Schwitters by proposing four routes that legislators could explore in an attempt to avoid some of the worst effects of the NHCR:

Anyone reading Health Claims Censored will be in no doubt that the NHCR is one of the worst pieces of EU legislation ever to reach the statute books: Mr Schwitters’ demolition job is all-encompassing and impressive. Perhaps the greatest problem Health Claims Censored will face boils down to its lack of editorial oversight. What we end up with is 450 pages, including references, of a densely worded and argued case against the NHCR, with all the legalese and cross-referencing that implies. We fear that, in his desire for completeness, Mr Schwitters has written himself into a corner largely reserved for lawyers and legislators – hardly the best place from which to organise a popular defense of the NHCR’s consequences.

That said, Health Claims Censored is almost certainly the most comprehensive independent examination of the NHCR yet conducted. We can heartily recommend it for those willing to invest the required reading time, especially if they’re interested in understanding how rules, supposedly designed to protect us, can be turned upside down for the sole purpose of removing fundamental freedoms for the benefit of a small elite.

Health Claims Censored can be purchased for €38.50 from the dedicated website or from De Facto Publications.