Home News McDonald’s and its war on your health 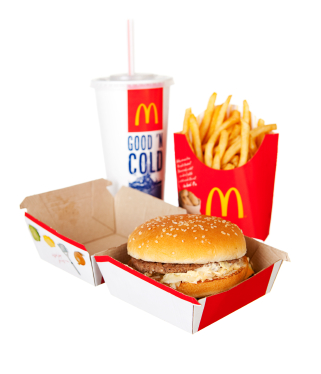 McDonald’s and its war on your health

Big Food baddie is actually worse than you thought

Junk food giant McDonald’s seems to have given up on its charm offensive of recent years.

“[McDonald’s] would never do anything to harm children”

Not long ago, especially after Morgan Spurlock’s documentary Super Size Me McDonald’s realised that its public image wasn’t great. So it decided to change its menu by concentrating on salads and other strategies.

It would appear that those days are now definitely over, as a recent shareholder-led proposal to measure the effects of its food offerings on children’s health was roundly defeated.  At around the same time, McDonald’s unveiled its new ‘health’ drinks for kids, which contain 12 spoons of sugar per serving.

That quote in the subtitle is from incoming McDonald’s boss Don Thompson, by the way, who has two children.

“Ronald McDonald is an ambassador for good”

Just how responsible McDonald’s is toward children – and human beings in general, in fact – can be gleaned from a quick look at the handy Nutrition Calculator on the McDonald’s UK website. Interested parties can use this remarkably honest bit of kit to see exactly what goes into the modern McDonald’s menu.

We reckon that an average McDonald’s meal might consist of a Big Mac, large fries and large milkshake.  Plugging these items into the Nutrition Calculator reveals the following: 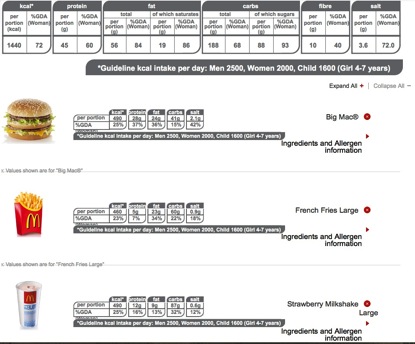 Combined with the massive increase in portion size in recent years, is it any wonder that we have an obesity problem on our hands? 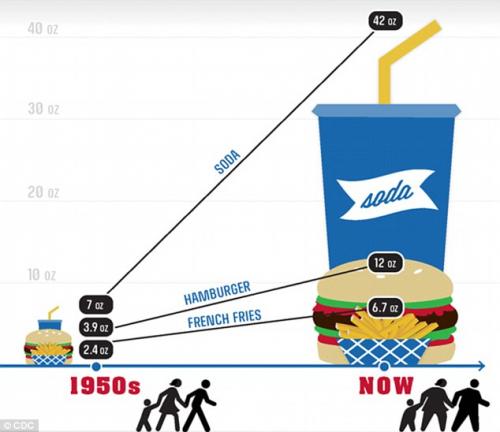 The Centers for Disease Control has released new figures that show the average restaurant meal is now four times larger than it was in the 1950's.

McDonald’s is more than a Big Mac

Purely in the interest of research — quite literally — Rob Verkerk visited a McDonald’s with a few to finding out more about what was on offer, and especially what the healthiest options Macdonald's has been giving air time to were all about. He came away from the experience convinced that the biggest problem with its food isn’t the much-maligned Big Mac. “It seems people don’t just eat Big Macs at McDonald’s – they eat a meal that includes fries and a drink,” commented Rob afterwards. “Taken together, the calorie count is enormous, much of which is sugar from the drinks like shakes, which as we know is a health disaster! In fact, the burgers are probably among the least unhealthy things on the menu. Whe I asked for a salad that was listed on the board, I found that none were available. Believing this might be down to freak demand, I dropped into another Macdonald's a few days later, only to find again, the salads were off the menu! The best the staff could offer was a bag of fruit containing oxidised apples and partly squashed grapes, and a bag of unnaturally sweet carrot sticks. Ummmm.”

Over to McDonald’s for (nearly) the last word

“We're proud of our food and the changes we've made to the menu,” said one McDonald’s spokesman recently, before, “Adding that only 26 of the chain's 14,000 U.S. restaurants are in hospitals”.

That there are any McDonald’s restaurants in any hospitals anywhere in the world is beyond belief.