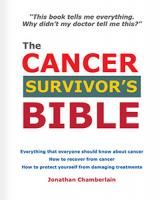 Everything you ever wanted to know about cancer, in one place

“Cancer can be beaten – there are dozens of ‘cures’ in this book...I do believe that many of these ‘cures’ – either alone or in conjunction with others – can lead to a real, long term state of being cancer-free.”

For most of us, the confirmed diagnosis of cancer is likely to be right up there as one of the most challenging times of our lives.  And for those of us who haven’t experienced what two out of every three of us will experience in our lifetime given current trends, we ask you to imagine.  Most probably, you’d be numb, scared and confused, and in that state you will be asked to make what may well be the most important decision of your life: what to do next.  Your oncologist makes some recommendations, gives you a few leaflets and urges you to get in touch once you’ve had time to think about things.  But don’t take too long, you’re advised, as the earlier conventional treatment begins, the better your chances for survival become.  What would you do?

For many, faced with this predicament, reaching for Jonathan Chamberlain’s book, The Cancer Survivor’s Bible, might be one of your better options on the road to that decision.

When Jonathan Chamberlain’s wife Bernadette was diagnosed with cancer in 1993 and subsequently died, it set him on the path to writing The Cancer Survivor’s Bible.  He realised that, amid the babble of loudly conflicting voices on this most emotive of topics, no book or other resource existed that could, “Wrap its arm around my shoulder and say: ‘Look Jonathan, this is the way it is’”.

This book is his attempt to redress the balance.  Crucially for the individual diagnosed with cancer, The Cancer Survivor’s Bible is clearly written, logically organised and jargon-free.  Never is the reader blinded with science, merely led soberly through the options with the minimum of editorialising.

Because The Cancer Survivor’s Bible is written for people with no baseline knowledge of cancer, almost 50% of the book is concerned with what might be termed definitions and politics.  The author is at pains to look at both sides of the coin, and the reader is introduced to the mainstream diagnostic techniques and treatment options in useful but never overwhelming detail.  For Chamberlain, however, there simply isn’t any avoiding the hard facts about conventional treatment: it doesn’t work very well.

He points out that radiation, surgery and chemotherapy have never been conclusively proven to be widely curative, and in many cases do far more harm than good – a conclusion amply supported by the words of many members of the cancer establishment.  To take just one example, Dr Hardin Jones of the University of California found that, “Untreated cancer victims actually live up to four times longer than treated individuals”.

If Chamberlain is correct in his estimation that, “Modern, laboratory-based cancer research is unlikely to arrive at results likely to be of benefit to cancer patients.  Not next month.  Not next year.  Probably not in a hundred years,” are the so-called ‘alternatives’ actually the only rational option in cancer treatment?  Chamberlain’s life journey appears to have brought him to this very conclusion, and the second half of The Cancer Survivor’s Bible is what most people will be really interested in: the cancer treatments, approaches and philosophies that work.

He begins this section with a bold statement: “Detoxification and diet are the twin platforms for any long-term strategy for recovering from cancer.”  Chamberlain is clearly as heedless of the skeptics’ view on the issue as we are at ANH-Intl – and we couldn’t agree more.

The second half of the book is where Chamberlain’s research really shines through.  He has gathered information on literally hundreds of different options, divided into ‘Detox and Diet’, ‘Herbs, Botanicals and Biological Therapies’, ‘Vitamins and Other Supplements’ and ‘Energy, Mind and Emotions’.  You’ve probably heard of detox strategies like colon cleansing or castor oil, but what about infra-red sauna therapy or therapies less used in a Western context, such as Panchakarma?  And while the mainstream media are finally catching on to the healing powers of fasting, there are myriad dietary strategies for cancer, including anti-inflammatory diets, the grape diet, the Gerson diet, the alkaline pH diet and the macrobiotic diet.  The book also includes a useful list of anti-tumourigenic (cancer-fighting) foods.

There’s also a useful list of herbs with known anti-tumourigenic properties, although the author acknowledges that he’s barely scratching the surface since there are up to 3,000 worldwide.  Herbal formulae and combination therapies are covered, and there are whistle-stop introductions to Ayurvedic and TCM approaches to herbal medicine.  You name it, it’s here: from homeopathy to oxygen therapy, vitamins A, B, C, D, E and K, selenium, magnesium, iodine, probiotics, coenzyme Q10, fulvic acid, resveratrol, Tesla coils, zappers, psychotherapy and emotional healing...the list is dizzying in its scope and endlessly fascinating for anyone with even a vague interest in cancer.

In a work of this sort, there will undoubtedly be omissions.  One that springs to mind is the unique medicinal system of Hildegard of Bingen, which identified the clinical signs of ‘pre-cancer’ and offered a specific remedy, anguillan.  German medical doctors have been working with her 12th-century system for thirty years, and attest to good results.

While The Cancer Survivor’s Bible is undoubtedly a fantastically useful tool, the ultimate success of any treatment approach lies in the effectiveness with which a variety of approaches are integrated to help a particular individual with his or her unique set of circumstances.  In cancer treatment, there is no ‘one-size-fits-all’ approach: clinical experience has repeatedly shown that a particular cancer can respond very well to a particular treatment combination in one individual, but not another – and vice versa.

Although the book provides the stories of several cancer patients who successfully treated their condition on their own, we would say that such integration ideally requires the input of a good practitioner.  Competent practitioner oversight is the best way to encompass support for the biotransformation, detoxification, endocrine and immune systems within the body, along with energy metabolism.  Apart from direct physiological and metabolic activities, the programme should also emphasise mental, emotional and spiritual (higher need) elements of the kind amply covered in The Cancer Survivor’s Bible.  This kind of approach, incorporated within the fast-growing discipline of Functional Medicine, is becoming increasingly accepted within more enlightened mainstream circles.  Because of the sheer weight of evidence and clinical experience behind it, such integrated approaches can no longer be regarded as quackery; it is after all already practiced in various mainstream US hospital settings, such as the Memorial Sloan-Kettering Cancer Center.

But as a tool, Mr Chamberlain’s book could be invaluable to many.  Clearly written and organised, full of priceless information and as gripping as any thriller for anyone interested in the topic of cancer, The Cancer Survivor’s Bible deserves its title.  Bravo, Mr Chamberlain.

The Cancer Survivor’s Bible by Jonathan Chamberlain can be purchased on his website via Amazon for £29.99 with free delivery.  Each section of the larger book is available at the same source as a series of eight short books and as Kindle ebooks.  The Cancer Survivors' Stories are available as a free download.