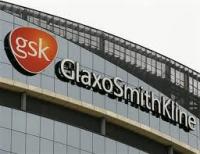 OK. The evidence is in. Big Pharma, most recently represented by GlaxoSmithKline (GSK), is involved in widespread fraud. But even mega-fines are unlikely to force them to change their ways. What is more likely to work is a widespread boycott of their products, as has been proven in the past. Today, we show you how to give GSK the boot and hurt its bottom line!

GSK recently admitted that it defrauded the US healthcare system, and was fined to the tune of US$3 billion. Among GSK’s crimes was its undisclosed knowledge that people on its diabetes drug Avandia were actually dying of heart attacks. Coming back to the penalty for its crime, the media are being slightly coy by describing this enormous sum as, “The largest health-care fraud settlement in history” and, “The largest settlement involving a pharmaceutical company” because, as far as we’re aware, there hasn’t been a higher fine of any description ever levied on a company in human history.

Water under the bridge?

The fine was for dishonest ‘off-label’ promotion of three of its drugs, Wellbutrin/Zyban, Paxil/Seroxat and Avandia, a practice that both depends upon and encourages off-label prescribing by doctors. As we stated in our recent article on the issue, “At a stroke, off-label promotion and prescribing turns pharmaceutical-based healthcare from something (supposedly) evidence-based into a lottery...”

Our guess is that the huge fraud settlement is all about trying to wipe clean previous bad press that is continuing to smear GSK's ‘good name’.  The charges were, after all, for its activities between 1997 and 2004.  And right on cue, GSK boss Andrew Witty popped up with his well-practiced crocodile tears: “Whilst these originate in a different era for the company, they cannot and will not be ignored. On behalf of GSK, I want to express our regret and reiterate that we have learned from the mistakes that were made.”

What makes Witty’s response even more laughable is that, by paying the US$3 billion, GSK has wriggled out of an actual conviction for fraud. A statement from the US Department of Justice reads, “Global health care giant GlaxoSmithKline LLC (GSK) agreed to plead guilty and to pay $3 billion to resolve its criminal and civil liability...Except to the extent that GSK has agreed to plead guilty to the three-count criminal information, the claims settled by these agreements are allegations only, and there has been no determination of liability.”

In other words, GSK isn’t going to be convicted of anything. All of this is no-one’s fault. Not only will the words “convicted fraudster” never appear next to GSK’s name or that of any of its executives, but we feel sure that armies of well-paid lawyers would be instantly despatched to defend the company’s childlike innocence, should anyone be careless enough to say otherwise.

But it doesn’t stop there. A statement made by GSK’s UK headquarters indicates that GSK made provisions for these costs some time ago: “The settlement of $3 billion is covered by existing provisions and GSK expects to make payments under the final agreement in 2012. These payments will be funded through existing cash resources.” Given that, together, the three drugs involved in the settlement made $27.9 billion for GSK, even US$3 billion can be seen as ‘the cost of doing business’.

Over the coming months and years, we’ll see GSK aggressively expanding its involvement in new sectors of the consumer health market, including the sports nutrition sector, previously dominated by non-pharmaceutical, specialist dietary/food supplement manufacturers. This process was kicked off in a big way by GSK’s acquisition of Maxinutrition, Europe’s number 1 sports nutrition company by market share, back in 2010. GSK, like the other drug companies, will be eyeing the botanical food supplement sector very carefully for opportunities. They are likely to become significant drivers of ever-tightening legislation on botanicals.

Will you buy products from a fraudster?

Despite the size of GSK’s enforced payout, context is everything. GSK is the fourth largest corporation on the planet, and will probably survive the fraud settlement with barely a flutter in its heartbeat or a dip in its revenues. As such, and with only half a tongue in cheek, our dedicated team is dividing its time between monitoring GSK for signs of behavioural change and scanning the skies for unusual sights.

So, what can make a difference?

The answer is simple: you! It’s been shown over and over again that customers, simply by boycotting a company’s products, can force that company to change its ways in order to avoid irreparable damage to the all-important bottom line. On a wider political scale, boycotts have been used to bring about far-reaching social change.

Here’s how to boycott GSK!

Many people’s natural reaction is to avoid using products made and promoted by a company that is alleged to have committed fraud. But when the products are so widely dispersed in the marketplace — yes, GSK is the world’s fourth largest company by revenue — they simply don’t know to to locate them. We show you how.

Click on each of the following links to the three main product sectors with which GSK is engaged and look for any GSK products you might use or be exposed to:

You’ll find more examples in the image below. 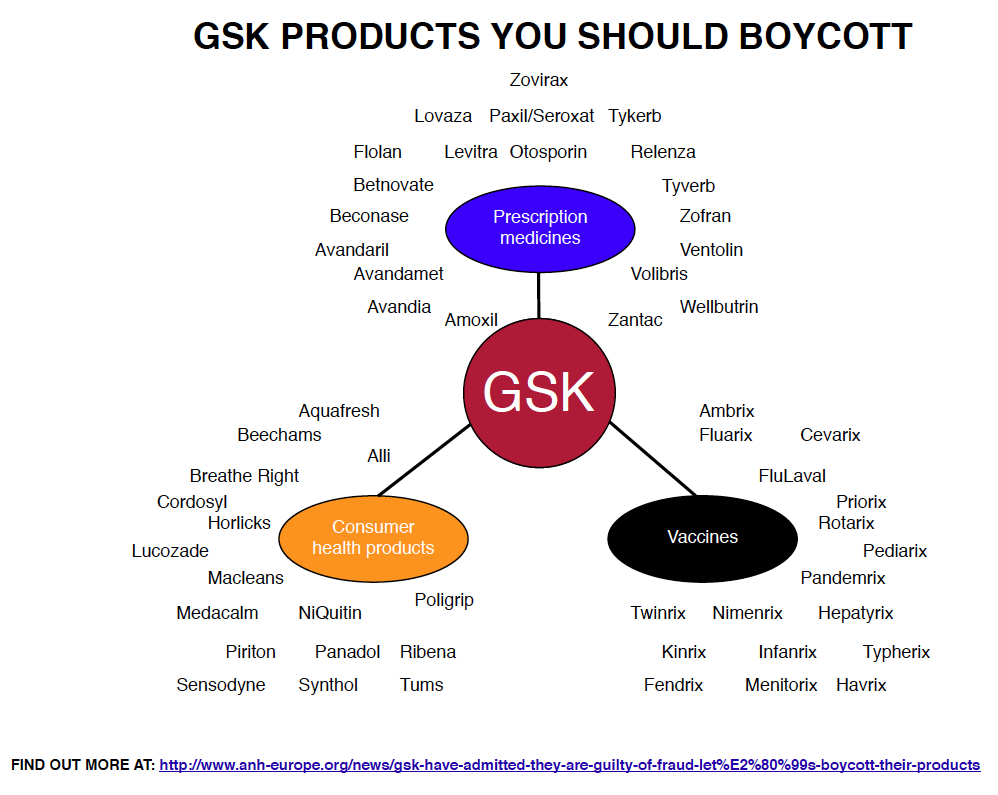 Key GSK products that you can choose to boycott.

Stop using the products you want to boycott – here are plenty of alternatives out there, from generic drugs through to natural alternatives. In the consumer health area, finding alternatives to GSK products is particularly easy! Let's face it, the vast majority of products out there have not been made or peddled by by companies that have effectively pleaded guilty to US$3 billion worth of criminal and civil misdemeanour charges.

We live in an age where the majority of the media is propped up, through advertising revenues, by some of the biggest corporations in the world.  In this respect, the pharmaceutical companies are hugely influential. But, however hard the media hype machine and the skeptic movement tries to make out that the world of natural healthcare is chock full of charlatans, frauds, liars and cheats, it’s vanishingly rare for companies or individuals in natural healthcare to be convicted – or admit their guilt – in fraud cases, or any other criminal offence. And certainly not $3 billion worth of (alleged) fraud.

In that at least, Big Pharma is quite welcome to its monopoly.

So let's work together to show what citizen and consumer power is all about; get the word out about the GSK boycott. Please share this widely in any way that you can!