Home News Olympics 2012: A lost opportunity to educate a nation about good nutrition 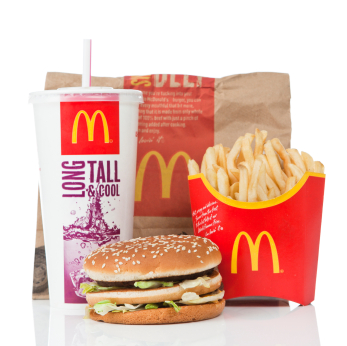 Olympics 2012: A lost opportunity to educate a nation about good nutrition

A visit to the Olympic Park of London 2012 promises a unique lifetime experience! The vast and impressive venues, the excitement of the events and the sheer thrill of the athletic performances, the atmosphere — the total sensory experience of being part of it all. But what about the food on offer? 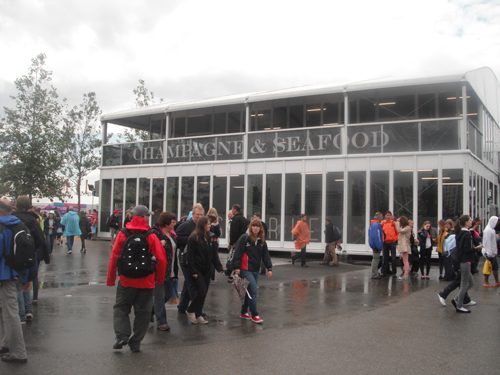 For the health conscious, with the money and the time to have a sit-down meal, there's seafood and champagne, or one lonely salad bar for the more time-challenged. But that's largely it! That may give you the impression that there are very few food outlets in the Olympic Park, but not so. Thanks to the London 2012 Olympic partners and sponsors, the Olympic Park is a junk food haven — a very large and prominent McDonalds, countless Cadburys' ‘Treat Stops’ and 'Treat Kiosks' every 100 metres or so, all interspersed with Coca-Cola stands, and some very British fish and chips! The latter apparently allowed by the skin of their teeth for being a British institution, given that McDonalds have the Olympics so sewn up no one else is allowed to sell fries on the site!

Not really the cuisine designed to 'inspire a generation' of enthused, new, young athletes. Such a missed opportunity to, at last, deliver potent healthy eating messages to the young of our increasingly inactive, obese and chronically diseased society.

Sponsors try to justify their sponsorship 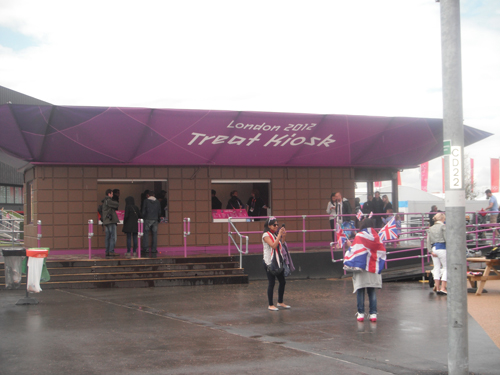 One of many Cadburys 'Treat Stops' in Olympic Park

It's been reported that Cadburys had pledged responsible marketing to children through its work as an Olympic partner, after being criticised heavily in the UK for its former ‘Get Active’ campaign, which enabled children to exchange chocolate wrappers for school sports equipment. It appears that Cadbury UK’s London 2012 marketing messaging is all about the idea that ‘treats’ are part of an overall responsible diet. But is this just lip service? Let’s face it, are young visitors to the Olympic Park really going to take onboard this message when they’re tripping over ‘Treat Kiosks’ every 100 metres or so around the Park?

Coca-Cola claims that its sponsorship of the Olympic Games ‘encourages consumers to lead more active, healthy and sustainable lifestyles’, though we’re not sure what evidence they’ve used to reach this conclusion. The company’s spokespeople also anticipated that ‘75% of the drinks we sell (by volume) will be sugar-free, water or juice’. We’re not so sure that lots of artificial sweeteners or fruit sugar are great for either adults or kids. We’ll let them off on the water though – raising just question on this point: why is their filtered tap water so expensive?

McDonalds claim that it is its food safety record, customer service and ability to operate on the huge scale required, that places the company at the level required of an Olympic restaurant partner. It describes its food as high quality British food. Well, there’s an example of harmonisation, a subject of another story released this week. McDonalds gives few further details other than to mention that the milk it intends to serve to all its customers is organically produced. How nice! Do you think organic milk will be seen in McDonalds outside the Olympic Park after the games? Unlikely, we would expect. Meanwhile, the world’s largest McDonalds will serve around 1200 people an hour during the games. The only positive note to this story is that the two-storey junk food restaurant will be rendered flat by bulldozers after the event.

The involvement of McDonalds, Coca-Cola, Cadburys and Heineken as partners and sponsors of London 2012 has been heavily criticised by many, including the Chief Medical Officer of Wales, Team GB’s head of sports science and The Lancet. The London Assembly, which scrutinises the work of the Mayor of London, has now called on the International Olympic Committee (IOC) to institute a ban on such junk food sponsors. The London Assembly also criticised Dow’s sponsorship of the games.

And the food for the athletes?

The eating regimes of those athletes now ensconced in the London 2012 Olympic Village is likely to be hugely varied, but one thing is sure, they won't be eating what the spectators are being forced to endure. Whilst there may be the obligatory McDonalds in the athletes' canteen, there are also ranges of foods on offer from the five continents. And all elite athletes know that high quality protein, fruits, vegetables and complex carbohydrates are where it's at for building a healthy body, strong muscle and sufficient glycogen stores. So whilst Usain Bolt may enjoy a chicken nugget or 5, the majority of athletes have been very complimentary about the range and quality of food on offer.

It’s hard to ignore the fact that once you allow sponsorship of a major sporting event such as the Olympics by fast food suppliers and chocolate and confectionary makers, it almost guarantees that key diet, health and lifestyle messages are going to be tossed out of the window. We all recognise that events like this are very expensive to host, and corporate monies are needed to oil the machine. But couldn’t other corporations that don’t directly interfere with good health and vitality have been selected? Isn’t this paradox akin to tobacco advertising for international sporting events, that became subject to a ban in Europe as of 2005?

The Olympics is a one-off opportunity to reinforce health and lifestyle messages that can transform a population. This kind of inspiration would have been so welcome given the extraordinary performances of British athletes in this year’s games, coupled with the dire state of physical inactivity among the British public, rated by the Lancet journal as the third most inactive country in Europe! This is an opportunity lost —the place is awash with Coca-Cola and chocolate stands and the worst foods to feed people! Meanwhile governments are failing to tackle rising chronic disease and obesity in our modern world.

How many more missed opportunities must there be before people wake up to the fact that the interests and profits of big business are consistently being placed above the interests and health of people, however much it is dressed up to appear otherwise! 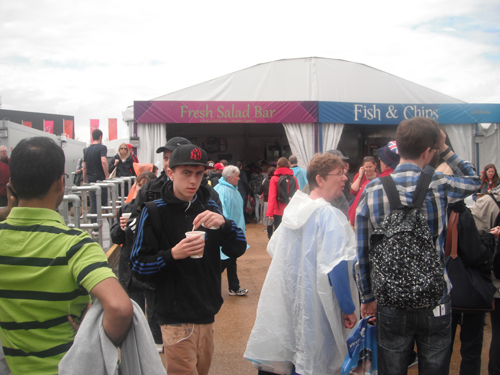 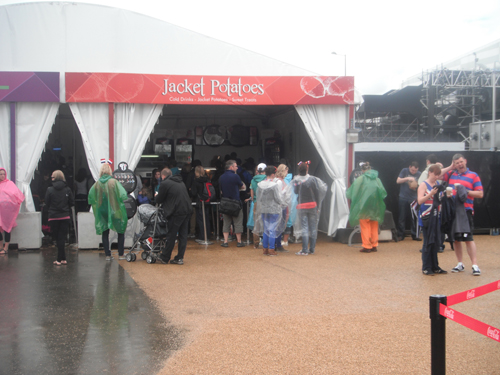 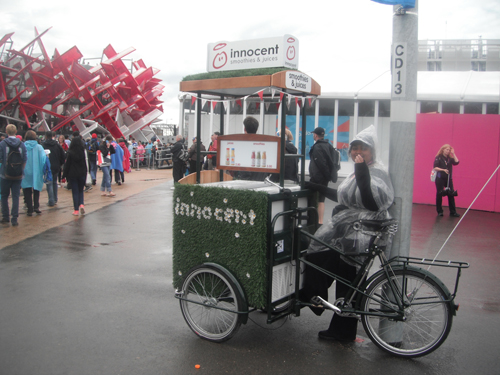 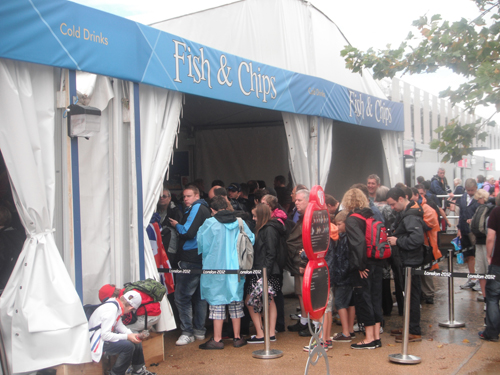 A traditional British favourite, fish and chips. Although they almost weren't allowed to include the chips... 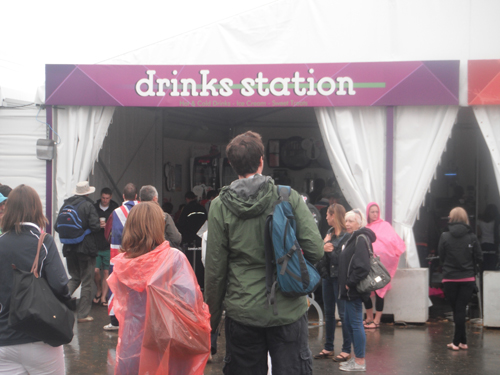 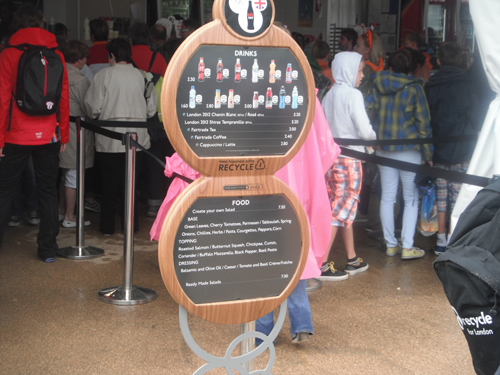 A list of the sugary drinks that are on offer 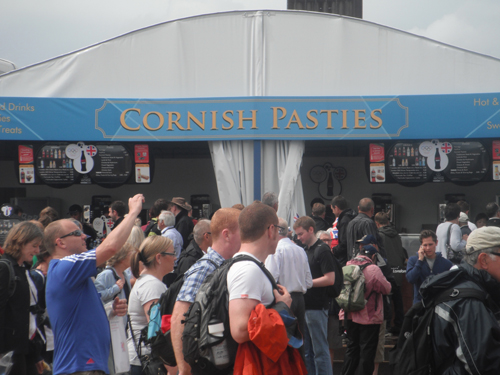 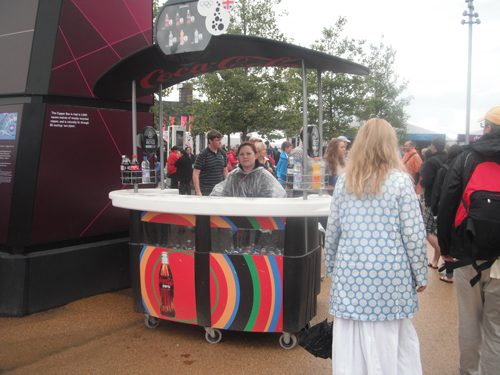 One of the many Coca Cola stands, predominant sponsors of the Olympics 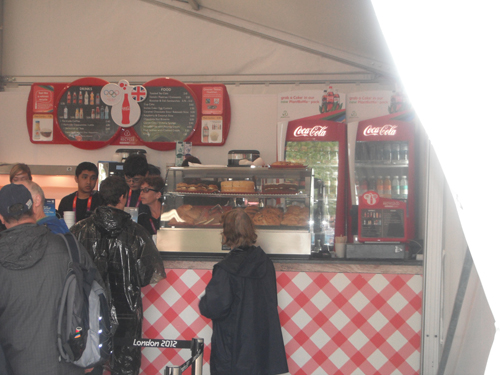 Coca Cola and a slice of cake?