&lsquo;Superhuman&rsquo; athletes made of belief, not barriers

"Together these past few weeks we have shared some wonderful days… Days where incredible people have performed feats we hardly thought possible. Days, in these Paralympic Games, where our minds were opened to what people can do, to what they can achieve by sheer talent and determination."

In the run up to the 2012 Paralympics we were told to "Forget everything you thought you knew about strength. Forget everything you thought you knew about humans. Meet the superhumans." In what has become one of the most recognised TV adverts, set to a stirring track by Public Enemy, in-your-face snippets of car crashes and explosions feature alongside paralympian athletic prowess. All aimed at making us think a little more deeply, whilst invoking our excitement, passion and anticipation. The Paralympics, London 2012 did not disappoint and was a fitting end to a summer of sporting legend.

Click on the picture below to watch the advert via YouTube, unfortunately embedding of the clip has been disabled. 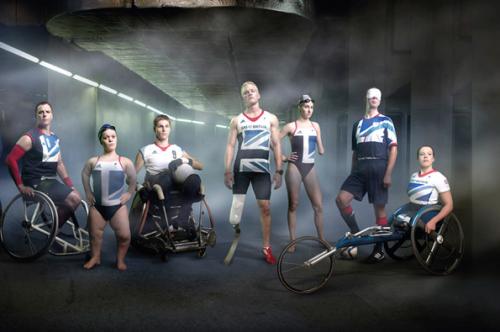 A spectacular opening ceremony on 29th August heralded one of the most powerful and inspiring sporting events ever. Once underway, it was another roller coaster of raw emotions, with many saying that the Paralympics was more exciting than the Olympics. “Thanks for the warm up”, said an advert in reference to the Olympics…. it seems few anticipated how awe-inspiring the Paralympics 2012 would be.

Despite their huge array of congenital or acquired disabilities, the Paralympic athletes proved themselves to be more than equal to the appellation – the superhumans. While many of us struggle to get off the couch to walk or pedal down to the corner store, — or take time to care for and appreciate our precious bodies — these competitors triumph in the face of adversity. They have demonstrated what human potential is all about — as much from the psychological and emotional side, as from the physical.

How many of us can say we are unbeaten in a game of tennis for 466 matches like Dutch Paralympic tennis player Esther Vergeer? David Weir’s inspiring demonstrations of emotional and physical strength were there for all to see during his breathtaking wins in the 800m, 1500m, 5000m and marathon.

Then there was what has been characterised as possibly the greatest comeback of all time, by Italian F1 star Alex Zanardi. His paralympic gold in the handcycling event at Brands Hatch, coming just 11 years after having both his legs severed in a high speed Champ Car race in Germany, showed he’d not lost his love of speed. His nearest competitor was left nearly half a minute behind him at the finish line!

South African runner Oscar Pistorius is widely credited for the current and unprecedented worldwide interest in paralympic sport. He puts much of his success down the inspiration he received while he grew up from his parents Henke and Sheila. When they made the intensely difficult decision to have both his legs amputated at just 11 months of age (he was born without a fibula in each leg), they wrote a letter explaining their decision intended for Oscar to read later in life. The letter included the statement "a loser isn't the person that gets involved and comes last, but the one who doesn't get involved."

Joey Reiman, Author of "Thinking for a Living: Creating Ideas That Revitalize Your Business, Career, and Life"

TED on Olympics and Paralympics

If you missed the 'Summer of Sport' be inspired by 10 powerful talks by both Olympians and Paralympians, including former Olympian Jeff Olson speaking out about the nutrition and lifestyle legacy we're handing down to our children.

Final curtain on summer of sport

So as the final curtain went down on London 2012 with last Sunday's closing ceremony, we found ourselves wondering what additional legacy the Paralympics is going to leave? If nothing else, maybe the sobering fact that so many of us take our bodies for granted; making diet and lifestyle choices that abuse and disrespect the able bodies that most of us have been blessed with. These elite superhumans are a testament to what our bodies are capable of. So, on those days when you feel tired, cranky and too time-challenged to truly nourish yourself and be active, remember that we're all superhuman. But remember also that getting even halfway there takes some effort — and for that we need to be inspired.

Enjoy the full closing ceremony and be inspired to live a lot!

We’ll end this piece — that aims to inspire and motivate — with some words from Lord Coe’s closing speech of the games: “The Paralympic Games has set new records every day, sporting records, records for crowds, for television audiences, for unbridled spirit. In this country we will never think of sport the same way and we will never think of disability the same way. The Paralympians have lifted the cloud of limitation.”