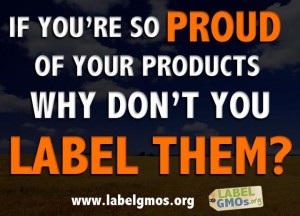 ANH calls for international boycott of Prop 37 NO campaign companies

US Election Day on 6th November 2012 saw Americans voting on a lot more than the next presidential election.  It was also the day when Californians went to the polls on the question of whether to make labelling on products containing genetically modified ingredients mandatory.  Europeans, who already benefit from this basic right-to-know, watched the polls on Proposal 37 with bated breath.  The outcome of Prop 37 was not the one we wanted or expected just a few short weeks ago.  But it didn't come as that much of a shock given that Monsanto and its cronies spent in excess $45 million USD on an opposing campaign and not surprisingly, resorted to some pretty dirty tricks in the process.  The 'No' camp have effectively ‘bought’ this result in California, but this movement is far from dead or silenced.  If anything the result is firing up determined initiatives in other US states.  Lessons have been learned and whilst the movement may not have the brute funding of bully-boy Big Food, we underestimated underdogs, will have our day!

How final is the result?

The California Right to Know Campaign issued a press release on 9th November stating that the Prop 37 ballot count was as yet incomplete, and the Californian final vote tally still awaited.   However, they added the rider that it's "rare for the outcome to be reversed when the final tallies are in, but we will continue to monitor the counting until the final results are certified”.

According to the Secretary of State’s official election page the figures (at time of writing) remain at 47% in favour of GM labelling and 53% in the 'No' camp.  Whilst all precincts have now submitted votes, it is still a partial count given the number of absentee and provisional ballots that are always counted late because of their sheer number.  It is unlikely that these will swing the poll sufficiently to change the result.  But worth remembering that in 6 successive recent polls since 2008, indications are that over 90% of Americans want GMO labeling.  That's some grassroots movement and it means that the result will be inevitable, no matter how long it takes.

Remember the Aesop's fable about the tortoise and the hare?  Well, the moral of the story is that slowly does it every time.  And whilst the Label GMO food movement may not equal the deep coffers or resort to the underhand tricks of the 'No' campaign, smarter strategy and dogged determination will win out in the end.

One of the key fear-inducing and deceptive tenets of the 'No' campaign was that Prop 37 was going to increase food costs, yet Monsanto and their Big Food cronies have spent more than £45 million USD preventing Californian citizens from knowing which foods contain their product!  As the US Label GMOs campaign point out, if GMOs are so incredible that they require such a spend to protect their inclusion, why aren't they proud enough to label them?

Join us in boycotting the products associated with these big names, and let’s hit them where it hurts most – in their pockets!  Here's a little taster of some of the brands to look out for:

As Jonathan Greenberg so aptly puts it in his Huffington Post blog, "the next time we head into the public ring with some of the highest paid, most sinister corporate propagandists on earth, we are going to need to hit a lot harder than the Prop 37 campaign's multi-million dollar TV ad blitz, whose motto was, "Food is Love. Food is Life. Food is Family."

True, but people deserve to be told the truth about the extensive evidence that exists for GMOs being a serious health hazard, whether it's a negative message or not.  Read Jonathan's "Ten Grassroots Lessons from Monsanto's Swift-Boating of the Prop37/Label GMO Campaign" to get smart for round two.  Bring it on, the grassroots will be ready!

ANH-Europe Say NO to GM campaign