Hamming it up in Parma

A day and a half in Parma, Italy, was all it took to seal my conviction that a dramatic storm of some sort will be required to force the European Food Safety Authority (EFSA) to change tack.  Last week’s conference, held a stone’s throw from EFSA’s HQ in Parma and which attracted over 600 food safety experts from around the world, provided even more wind in EFSA’s puffed up sails.  We must now concede that, unless it comes from one of the European Union (EU) institutions, any external pressure applied to EFSA is going to achieve little or nothing. 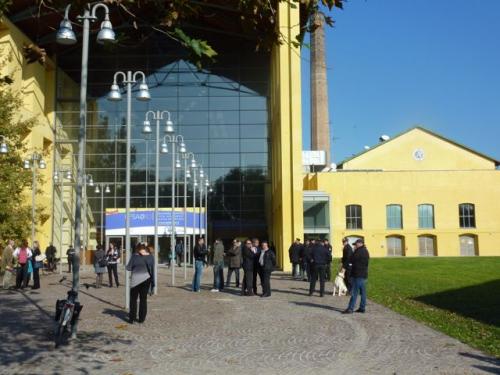 Auditorium Paganini in Parma, venue for the [email protected] event

EFSA is wedded to the terms of reference given to it by its sister EU institution, the European Commission.  Last week’s conference in Parma, Challenging boundaries in risk assessment – sharing experiences, provided EFSA with international scientific support to renew its commitment to its existing, controversial course.

Among EFSA’s ‘independent’ and ‘transparent’ scientific assessments are safety approvals for dozens of genetically modified (GM) crops, and nearly two thousand rejected health claims for nutrients.  These include well studied nutrients such as coenzyme Q10 and antioxidants in fruits and vegetables, including resveratrol.

EFSA appears to care little about the implications of its actions within the field of nutrition – especially with regard to the downstream effects of its actions in the years ahead.  If asked, EFSA would undoubtedly say this should not be its concern.  It appears to care only for its terms of reference, to which it adheres painstakingly.

Last week’s conference seemed less about confronting challenges to EFSA’s approach and more about sharing exclusively positive experiences.  Conspicuously absent from the speakers’ platform were any prior critics of EFSA.  I sat somewhere near the back so I could not only follow the proceedings, but – just as importantly – monitor the reaction to what was being said among the audience.  Many of the audience seemed to be EFSA aficionados.  They included government scientists from the EU’s 27 Member States, representatives from food and pharma giants like Nestlé and GSK, and academics excited by the prospects of forthcoming contract work in the form of trials designed to master EFSA’s scientific requirements. 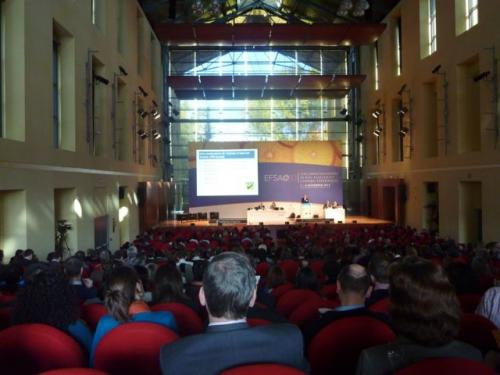 Following a glossy opening speech by EFSA’s Catherine Geslain-Lanélle, was a disturbing address from Professor Anne Glover – none other than the European Commission’s chief scientific advisor. 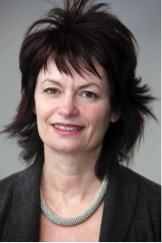 It sent a chill down my spine when Prof Glover presented a slide (below) credited to Europe’s leading biotech association, EuropaBio, which seems to have adopted the professor as their latest pinup.  The slide (below) showed which governments had supported, rejected or abstained from judging EFSA opinions on GM crops.  Austria sat at the top of the graph, along with the diminutive Luxembourg, both of them having rejected every single one of EFSA’s opinions on GM crops.  Sweden, in contrast, got full marks and a slap on the back for never contesting any, and duly takes its position at the bottom of the graph. 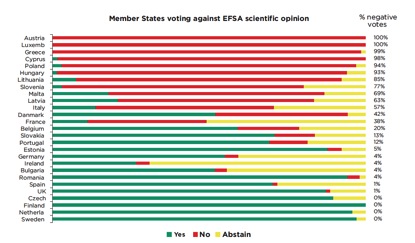 Prof Glover, herself a national from a Member State – the UK – that has supported 99% of EFSA’s opinions on GMOs, remarked: “I will be in my post for 3 years until President Barroso steps down.  I want to achieve a more rational approach to the evidence [with respect to GM foods].  I want my colleagues in Austria to understand that the evidence for safety is sound.  I want them to say that the evidence is sound and to admit that there are other reasons that they are voting against it.”

Time will tell if she manages to get her way, but no one was left in any doubt that this was the prime purpose of Glover’s appointment.

US and NZ endorsements

The conference then introduced a rash of EFSA insiders and outsiders whose role appeared to be that of public relations experts, paid to polish EFSA’s image and further cement the agency’s way of doing science.  Among the speakers were the chief scientist to the US Food and Drug Administration (FDA), Professor Jesse Goodman MD, who appeared more than satisfied with the, “over 100 interactions” his agency had so far had with EFSA. Americans who are concerned about the ‘Europeanisation’ of the FDA’s regulatory approach had better wake up if they are still sleeping.

Putting ever thicker layers of icing (empty calories) on the cake were Professor Steve Hathaway from New Zealand’s Ministry of Primary Industries, and Professor Thomas Burke from Johns Hopkins Bloomberg School of Public Health, who appeared on video after familial circumstances forced him to cancel his trip to Parma.

Assimilating my experiences at last week’s conference in Parma with this week’s Health ingredients Europe 2012 conference in Frankfurt, where I was the sole dissenter among several presenters on the thorny subject of EU health claims, I came to the following conclusions:

Companies eager to communicate the health benefits of their products to consumers will have some reprieve in the short-term by being able to continue to use, after 14th December, health claims that are still subject to 'transitional measures'.  This includes the 1600 or so 'botanical' claims that remain ‘on hold’ subject to a decision being made on how to proceed by the European Commission. On that subject, we still await the outcome of the Commission’s recent consultation, in the knowledge there won’t be a lot of support outside the smaller, poorly heard, members of the food and supplements industry for a new regulation that would allow traditional claims to be made for food and food ingredients.

Of course, big companies with sufficient funds will simply attempt to play the game. After all, they have the money to buy a ticket for a game they helped develop.  If they want any assistance, they can buy in external expertise, and one of several contract research organisations (CROs) that has developed a track record in this area can help secure claims by designing and overseeing EFSA-friendly clinical trials.

As depressing as it might sound, things will need to get worse, in my view, before they get better.  And that will only happen after the 14th December deadline for claims compliance, when it may at some point become imperative to take this issue up with the European Court of Justice.  A carefully prepared case, which demonstrates irrefutably that the Nutrition and Health Claims Regulation has failed with regard to its intended purpose, might be the only way of forcing the European Commission and EFSA to change the way EFSA evaluates those nutrients that are beneficial to our health.