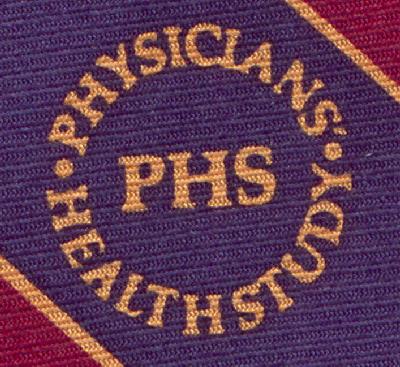 The large-scale Physicians’ Health Study II (PHS-II) has reared its head again. Somewhat surprisingly for a study, “Designed to fail: A trial without meaning”, it reports some good results this time around, as well as the expected failures. We look at the reasons for these conflicting results.

What did the study examine?

The PHS-II was a randomised, placebo-controlled clinical trial looking at dietary supplementation – in the form of a multivitamin, vitamins E and C and beta-carotene – on the incidence of cancer, cardiovascular disease (CVD), eye disease and cognitive dysfunction. Not only was PHS-II large in scale, enrolling 14,641 male doctors aged 50 years or more at the time of enrollment, it was also long-term, with treatment and follow-up occurring between 1997 and 2011. A huge number of academic papers have flowed from the Physicians’ Health Study, the most famous – or maybe infamous – being the article on vitamins C and E in CVD prevention.

Two new papers have now been published by the PHS-II authors. The first of these examined whether taking a daily multivitamin protects against the development of cancer. Encouragingly for vitamin-lovers, the answer was a firm ‘yes’: the PHS-II data showed that men taking a multivitamin had a statistically significant, 8% reduced risk of developing cancer overall, compared with placebo-treated patients (17.0 cancers per 1,000 person-years versus 18.3, respectively; p=0.04). However, the same association was not observed for any site-specific cancers, nor did the authors observe that multivitamin use significantly reduced deaths from cancer.

The second paper examined the effect of multivitamin use on CVD risk in men – and found that they offer no protection from major cardiovascular events. Such events occurred at a rate of 11.0 per 1,000 person-years in the multivitamin group, compared with 10.8 per 1,000 person-years in the placebo group (p=0.91). The same was true for secondary endpoints including total myocardial infarctions (heart attacks) and total stroke.

Hang on a minute!

Those of you with long memories – quite possibly as a result of taking a high-quality, food matrix multivitamin along with a varied, whole food, unprocessed, nutrient-dense diet – will recall that we’ve covered the PHS-II before. Back in 2008, we found a long list of methodological flaws in the PHS-II paper on vitamins C and E in CVD prevention; so many, in fact, that it presented a textbook example of how not to perform an analysis of vitamin supplementation! Unfortunately, many of the same problems apply to the new papers – along with some new ones.

Prime among them is the multivitamin formulation used in the trial. Like the other supplements examined by PHS-II, Pfizer’s Centrum Silver is a low-cost product containing synthetic vitamin forms – such as the DL-alpha tocopheryl acetate form of vitamin E instead of mixed tocopherols and tocotrienols – at doses mostly at or below the Daily Values set by the US Food and Drug Administration. These values are set just high enough to avoid vitamin and mineral deficiencies, and are not concerned with ensuring optimum health – so it’s not surprising when the PHS-II reports negative results.

To some extent, it’s a good thing for the study participants that they were only taking low doses of some of these synthetic vitamin and mineral forms, since there are questions over risk when taken at higher doses. For more information on supplement dosing in the PHS-II, refer to the ‘Dosage’ section of our 2008 rebuttal.

The PHS-II study population consisted of male, North American physicians aged 50 years or older when the study began in 1997. They are, therefore, well educated, affluent, overwhelmingly Caucasian in origin, likely to be living healthier than average lifestyles and highly compliant with the study protocol. This drastically limits how the conclusions of the study can be generalised to the population at large, but that hasn’t prevented lurid headlines from doing exactly that.

Both new PHS-II papers also suffer from problems of using an undefined placebo and of ignoring vital interactions, as described in the ‘Placebo problems’ section of our 2008 document.

So why did a cheap multivitamin reduce cancer?

The answer to this question, as pointed out by Mike Ash of Nutri-Link, may lie in the ‘triage theory’ of Professor Bruce Ames. According to Prof Ames’ theory, when micronutrients are in short supply, the body allocates them to important bodily functions first – for short-term, rather than long-term, survival. Topping up micronutrients via a multivitamin will therefore reduce the likelihood that long-term degenerative conditions, such as cancer, will develop.

Conclusions and Call to Action!

We’ll keep it short and sweet: don’t take too much notice of PHS-II and studies like it! And keep taking your multivitamins along with your healthy diet and lifestyle but try to make sure they’re higher dose, high quality and, as far as possible, contain natural source ingredients, particularly when it comes to vitamin E, carotenoids (including beta-carotene) and folate.