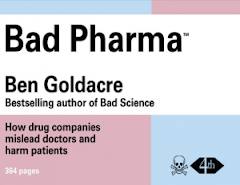 Good research but dodgy conclusions make this an example of &lsquo;limited hangout&rsquo;

“It is clear from the evidence presented in this book that the pharmaceutical industry does a biased job of disseminating evidence...whether it is through advertising, drug reps, ghostwriting, hiding data, bribing people, or running education programmes for doctors.”

Dr Ben Goldacre, Guardian columnist and champion of evidence-based medicine (EBM), must be devastated.  The man who once triumphantly declared that, “Evidence-based medicine is beautiful, elegant, clever and, most of all, important. It is how we know what will kill or cure you,” now finds it, “Hard to imagine a betrayal more elaborate, or more complete, across so many institutions and professions”.  Indeed it is – but, as we shall see, there are more layers to this story than initially meet the eye.

First of all, here’s a whistle-stop tour of Goldacre’s findings.  Pharma-sponsored clinical trials are more likely to come down in favour of the sponsor’s drug.  Worse, up to 50% of clinical trial data are never published in any form, because they report negative results.

Clinical trial registers, which could provide a solution via easily accessible records of all trials ever conducted, are woefully incomplete, often publicly inaccessible and practically useless.

New drugs are themselves the results of a compromised research pipeline.  Early trials are performed on poor, healthy subjects who are unrepresentative of the end-product’s intended patient population; later-stage trials are increasingly being outsourced to clinical research organisations (CROs) operating in the developing world – again, unrepresentative and ethically highly questionable.  And yet regulators bend over backwards to accommodate CROs.

Lifting the stone on the actual protocols and analysis of clinical trials sends a whole gallery of critters scurrying for cover of darkness.  Here’s a partial list: fraud; testing treatments in unrealistic, ‘ideal’ patients; testing drugs against poor comparators; trials that are too short or too small, or that stop early or late; trials that switch their main outcome after they’ve finished; ‘seeding trials’ that are really nothing more than marketing.  Even Goldacre’s beloved meta-analyses and systematic reviews can be gamed in a similar manner, quite apart from the huge holes in the evidence base courtesy of unpublished trials.

Safety testing of a drug only really begins once it’s been approved, in a process known as pharmacovigilance: “This is because you need data on lots of patients to spot rare side effects, but the trials used to get the drug approved are usually small”.  Because pharmacovigilance systems are secretive and full of holes, patients are being used as guinea pigs in a highly inefficient framework.

And finally, enmeshed throughout the process of drug development are the various arcane practices that occur under the broad title of ‘marketing’.  Ghostwriting and publication plans produce a pseudo-academic confetti of biased abstracts and dodgy articles.  Academic journals receive much of their income from the pharmaceutical industry – and publish entirely fake journals.  Drug reps, celebrity endorsements, direct-to-consumer advertising, disease mongering, pharma-funded continuing medical education, financial inducements to physicians and various flashy giveaways...not surprising that pharma spends twice as much on marketing as on research and development, is it?

The way forward for clinical trials

Enough of problems.  What of solutions?  Dr Goldacre has done an admirable job of examining many facets of the grand illusion that is modern medicine, but it’s his conclusions that are really interesting.  For we are dealing with a man who agrees with the European Union (EU) that, “A drug is a molecule that does something useful, somewhere in the human body”, and who is entirely wedded to the twin concepts of EBM and the pharmaceutical industry – even in the face of his own evidence.  So much so, that his crystal ball foresees a time when doctors will be, “A kind of personal shopper for treatments”.

Take clinical trials.  Goldacre is scathing about observational evidence, believing that, “We only know what works because of trials”.  To his credit, Goldacre embraces comparative effectiveness research, but in a slightly disturbing manner: using the example of two commonly prescribed, and very similar, statins, he envisages a system where patients are automatically included in such trials and any doctor who opts out, “Could be regarded as an oddity who is harming future patients”.  This is, “Our reciprocal relationship with research in medicine,” where, “We provide medicines free at point of access; in exchange, you need to let us find out what works best for you and others”.  At this point, the argument becomes rather circular: to solve a situation where we don’t know what works because the evidence base is hopelessly compromised, we need to force patients into more trials of drugs approved because of that very evidence.

Like Professor Edzard Ernst, Goldacre is entirely fixated on the ‘specific therapeutic effect’ at the expense of the ‘total effect’ of the therapeutic relationship – otherwise known as ‘missing the wood for the trees’.  Rather than the bigger, simpler trials called for by Goldacre, we believe the best way forward is to examine patient outcomes under treatments and programmes guided by different practitioners.  These outcome-based trials should include the overall patient experience and the emerging data should then be subject to sophisticated modelling techniques to establish those interactions that yield the most pronounced benefits, with the least risk.  We have a long way to go with this, but developing such methodologies is among our current priorities.

Down the garden path

Elsewhere, Dr Goldacre's suggestions and solutions are perfectly logical and workable, as far as they go, which means firmly within the box marked 'EBM'.  Indeed, Goldacre is at pains to stress his belief that, “Some simple fixes...would put all this behind us...globally, at almost no cost”.  This and other phrases act like cartoon signposts toward some unknown destination, prodding one’s thoughts down paths they might not otherwise have explored.  It's there in the occasional empty digs at 'quacks' and homeopathy, in the way that there are never any “smoking guns”, in the way that people working for drug companies and regulators are always thoroughly good guys and gals.  All of this becomes clearer in the chapter on marketing, when we find out precisely where Dr Goldacre is headed – reader’s nose firmly in hand.

“Here, we should pause for a moment to remind ourselves what we really think about the drug industry, and the people who work in it,” declares Goldacre, at the end of a chapter and book listing endless chicanery and deceit by that very industry.  “Pharma should be adequately regulated and transparent...There is no medicine without medicines; companies can produce great products”.  I don't know about you, but I resent being told what I think, and especially about an industry that has deliberately set out to cause the very situation Goldacre portrays so vividly.

His proposed solutions must be therefore assessed in the context of his remarkably relaxed attitude to pharma companies.  One of those solutions deserves particular scrutiny: Goldacre’s suggestion that pharma should be granted an amnesty encouraging it to release hidden data and come clean on ghostwritten papers. “For the sake of patients, we need every single hidden trial to be made available, now, today...Every moment that the pharmaceutical industry continues to hide it from us...is an ongoing crime, against all of humanity”.  This will take years, because, “This material is held in old salt mines, in secure dry storage archives, on ageing disks, in huge clunky 2012 laptops, and in cardboard boxes” – assuming it hasn’t been shredded, burnt, sent on a rocket to the moon or otherwise ‘lost’.  At this point, trust is in short supply.

But wait.  Isn’t there an alternative?  Not in the World According to Goldacre. “There is only one way we could work around the industry still withholding trials: we would have to throw out everything...and then start again.  This is an absurd suggestion”.  In other words, the pharmaceutical industry can make a laughing stock not only of EBM, but of mainstream medicine in general. It can kill and maim millions of people with its poisonous, smoke-and-mirrors nostrums.  But because we need it so much, we’ll let it off with a slap on the wrist if it comes clean.  Then we can enter some future medical Utopia by trusting the pharmaceutical industry to put in place the measures suggested by Dr G.

Stop it, Ben, you're killing me.

Although they’ll never be acknowledged by Goldacre, the solutions to the problems detailed in Bad Pharma already exist.  They exist in the realm of natural medicine and personal responsibility for one’s own health, in working with the body’s innate mechanisms to ideally prevent disease from occurring, and to gently bring the body back into equilibrium when things do go wrong.  Far from being the mainstay of medicine, the sledgehammer drug approach should be reserved for extreme cases, and used rarely or never.  With a healthy population, drug-based medicine and the pharma industry would wither and die through lack of need. 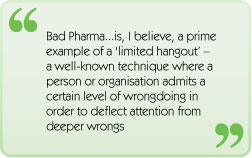 This is one reason why Bad Pharma has been written.  It is, I believe, a prime example of a 'limited hangout’ – a well-known technique where a person or organisation admits a certain level of wrongdoing in order to deflect attention from deeper wrongs.  We can expect to see pharma enthusiastically embracing many of the suggestions made in the book in order to keep the show on the road.  In this context, it would be essential for Goldacre to portray himself as emphatically NOT A PAWN OF BIG PHARMA – and we have always wondered why he so strenuously denied an accusation we never made.

Now, I guess we know.