Is 'transparency' meeting between regulators and civil society just a sham?

I claim to be transparent but am opaque


My opinions aim to keep you safe

Yet on the issues of the day

You may know the answer already. We used to think we did. We’ve narrowed it down to two options at the bottom of the page.

Now that I've been to the headquarters of the European Food Safety Authority (EFSA) in Parma, Italy, I’m more convinced than ever that the entire concept of 'transparency' is alien to it. That's transparency as in being open to questions and criticisms from European Union (EU) citizens and taxpayers – you and I, in other words; the people who pay EFSA's wages – rather than any aversion to glass or desire to live in a bunker.

Because there's plenty of glass at EFSA's HQ, which looks rather like a badly shuffled deck of gunmetal grey playing cards, or an enormous metal Sticklebrick dropped onto the outskirts of Parma by some unseen giant toddler. And while I'm sure that Parma is a charming town, it's not easy to get to: an hour or so's drive from Milan Linate airport, or an inconvenient bus and train combo – both of which I tested on this occasion – are the only ways to reach the city of dry-cured pork and Europe-wide food regulation. One can't help but think that this was entirely deliberate – that EFSA would rather do its work where the hoi polloi can't easily intrude – and that it finds the idea of democratic accountability rather slimy and disgusting, like something old at the back of the fridge. 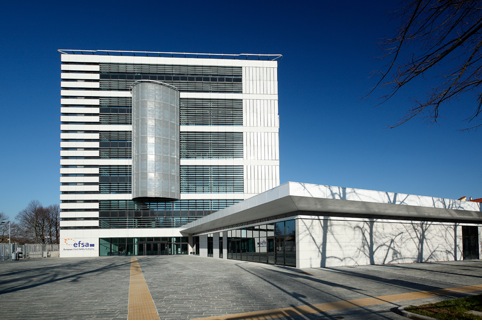 As well as ANH-Intl, there were representatives of the Greenpeace Science Unit, Friends of the Earth Europe, the European Consumers' Organisation (BEUC), two European beekeeping associations and the pro-biotech Public Research & Regulation Initiative (PRRI).

If I wanted to design a meeting so that I received as little criticism as possible, I'd pack it full of dull presentations by my colleagues and leave very little time for questions and discussion. Coincidentally enough, this was exactly the format EFSA chose for this meeting.

An interesting discussion did occur following the section on EFSA's environmental risk assessment guidance on GM animals, however. First, EFSA maintains it has, “No case to defend” for relying on a UK company producing GM mosquitoes for information on GM animals, in the absence of any EU research. Logic dictates that, for something as wildly novel, inherently unpredictable and uncontainable as GM animals, the precautionary principle would apply. “The precautionary principle is something the risk managers [i.e. the European Commission] have to take then, based on this outcome,” said Elisabeth Waigman, Head of EFSA's GMO Unit. And with that, the buck was firmly passed.

Séralini and toxicity of GM crops

As our other article this weeks shows, EFSA appears engaged in a desperate attempt to dismiss the findings of Prof Gilles-Eric Séralini et al on the long-term toxicity of Monsanto's GM maize, NK603. At the GMO NGO meeting, EFSA stuck rigidly to the arguments contained in its preliminary review of the paper. As to whether EFSA is employing double standards over Séralini et al, as alleged by Testbiotech, Claudia Paoletti, Ms Waigman's Deputy, missed the point entirely, whether deliberately or not. The point is that the Séralini et al paper displayed a higher level of scientific rigour than many of the long-term GM feeding trials that EFSA has accepted. But for Ms Paoletti, the crucial issue was that Séralini et al didn't declare their objectives clearly enough or apply sufficient statistical analysis. This, it seems, is sufficient reason to bury the study — and any further investigation of its findings.

According to Walter Haefeker of the European Professional Beekeepers' Association, the Séralini et al affair may yet blow up in EFSA's face. EFSA's public credibility is at an all-time low and, “The German Ministry of the Environment and the German Ministry of Agriculture [have decided] not to base any public decisions they make on an EFSA opinion”. At this, the assembled EFSA staff were nonplussed – and if true, it represents something of a bombshell.

EFSA's approach to evaluation of GM herbicide-tolerant (HT) crops appears to have gone beyond its risk-assessment remit, by making recommendations on how to mitigate the risks it has identified and then declaring that those risks are unlikely to exceed the risks posed by conventional crops. As Janet Cotter of Greenpeace pointed out, “If I'm a national authority...and I want to employ the precautionary principle and not grow GM HT or HT crops at all, then based on this opinion, I don't have much room for manoeuvre”. In response, 'GMO external expert' Jeremy Sweet gave a glimpse into the relationship between the GMO-frenzied European Commission and EFSA: “We tended to hold back and the Commission asked us for more and more”.

As a consultative exercise, this was a resounding failure. Only 7 NGOs were represented, little of the meeting was given over to discussion, EFSA displayed no willingness to listen to or act upon NGO concerns and anyway, there's no obvious mechanism to translate those concerns into revisions of EU legislation. But at least we now have a better idea of what GMO activity is in the pipeline, and we must pull as hard as we can on the few levers of democracy that remain open to us. I should also mention that EFSA part-paid for our travel and accommodation to the meeting, as they did for all the NGOs present. Whether this is through generosity or a misguided attempt to gain favourable coverage, we have no idea; but we value our independence far too highly to be swayed by any such attempts anyway.

Oh, and by the way: the answer to the riddle we opened with is below. But you knew the answer anyway, right?