Home News Next chapter of the great oil debate 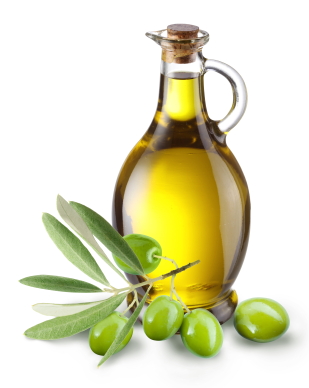 Next chapter of the great oil debate

Following questions and emails from a recent ANH-Intl feature on edible oils, we pitch two popular edible, high monounsaturated oils against each other

Why they modified traditional rapeseed in the 1970s

Rapeseed (canola) oil has had an unhappy relationship with the media and the public for some time.  In relation to non-GMO variants of the oil, as consumed in Europe, some of this may be unjustified.  Some of the original negativity came about because of high levels of erucic acid in traditional oilseed rape cultivars (Brassica napus), that also contain significant quantities of bitter, but nonetheless cancer-fighting glucosinolates.  A body of science developed between the late-1950s and 1970s suggested that erucic acid may be harmful, specifically after it had been associated with increased heart damage in laboratory animals.

Canadian plant breeders then produced, using traditional breeding techniques, low (less than 2%) erucic acid, ‘Tower’ cultivars, that are the main non-GMO ones cultivated and consumed in Europe, Canada and elsewhere.  The name canola was actually derived from “Canadian oil, low acid” in 1978.  This variant of rapeseed oil had a quite different nutritional profile to the traditional varieties that had long been used primarily for industrial purposes, notably as lubricants and fuels. 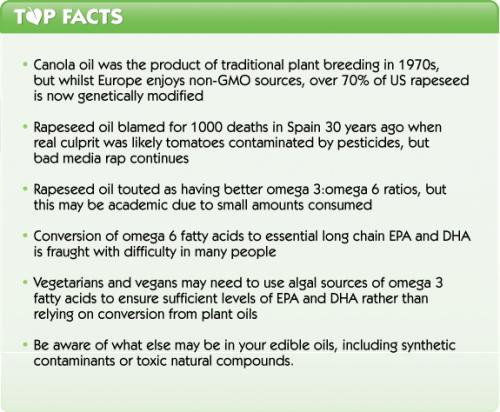 However, since this time, some scientists have questioned the studies that suggest high intakes of erucic acid oil may be damaging.  They argue instead that the effects may have been attributable more to the high intake of fat in the experimental animals, rather than the erucic acid itself.

Today, in the USA, over 70% of the canola is now genetically modified (for Roundup resistance), and finds its way into a huge range of processed foods. Globally, acreages dedicated to GMO canola continue to expand for food and biodiesel purposes, with 26% of the world’s canola being GMO as of 2011.

Lest we not forget…..a cover-up

It is also necessary to mention the effects of another event, which still stands as the worst food poisoning disaster ever experienced in Europe.  In Spain, around 30 years ago, around 1,000 people died as a result of what was thought to be the chemical contamination of rapeseed oil.  The case became known as the ‘Spanish cooking oil scandal’.  While this issue has left a bad taste in many people’s mouths for years, not only were the deaths in no way related to rapeseed oil, it seems the official explanations were likely a cover-up for the real cause, most probably contamination of tomatoes by organophosphate pesticides.

These background issues aside, today’s non-GMO rapeseed oil, has a nutritional profile that appears rather favourable. It’s high in monounsaturated fats, the healthy fat that's associated with olive oil.  Cold pressed extra-virgin rapeseed oil might contain around 60% monounsaturated fatty acid (MUFAs), whereas as much as 80% of a good cold pressed extra virgin oil may be comprised of MUFAs.

Rapeseed is widely touted as a healthy oil because of the ‘better’ ratio of n-6 (Omega 6) to n-3 (Omega 3) polyunsaturated fatty acids (PUFAs).  This is certainly something in the favour of non-GMO rapeseed oil over its olive oil counterparts, but it must also be recognised that the amounts of total PUFAs may be much less in olive than rapeseed oil.  According to data from the US Department of Agriculture (USDA), the PUFA content of rapeseed (canola) oil is typically around 30%, against around 10% in olive oil.

Also, the higher relative amount of n-3 PUFAs in rapeseed as compared with olive oil may be somewhat academic given the relatively small amounts consumed and, even more importantly, the generally poor conversion of the short-chained n-3 fatty acid alpha-linolenic acid (ALA) in vegetable oils to the all-important eicosapentaenoic acid (EPA) and docosahexaenoic acid (DHA).  The conversion rate may be as low as 5%, and even less in infants.  The PUFAs in marine oils, by contrast, already contain significant amounts of EPA and DHA.

A helping hand for vegetarians and vegans?

However, for vegetarians and vegans, the best nutrition advice has always recommended that sufficient quantities of ALA are consumed in addition to minimising n-6 fatty acid intake.  The enzymes that convert ALA to the much-needed EPA and DHA also convert linoleic acid (LA) into longer chain n-6 fatty acids.  However, they can be saturated with n-6 fatty acids if these are already excessive in the diet.  If the enzymes are saturated, they simply can’t convert n-3 fatty acids because all the molecules are already taken up with substrate and there is no ability for further function.  Research has shown that in diets rich in n-6 PUFA, conversion of ALA to n-3 PUFAs is reduced by 40 to 50%, as against approximately 6% for EPA and 4% for DHA in diets high in saturated fat.  To further complicate the picture, it appears that conversion to DHA is especially restricted from ALA, even if you manage to make the conversion in the first place.  DHA is critical for normal brain development and neurological function, as well its implications in fertility given its role in promoting healthy spermatozoa.

Additionally the enzyme reactions necessary for the conversion of ALA to EPA and DHA are zinc dependent and many people are woefully deficient in zinc.  Given the above, you can see why, given the nature of many people's diets, it's a bit of a lottery whether you can actually access the potential for converting n-6 PUFAs to the essential EPA and DHA.  So, for vegetarians, moderate intakes of non-GMO rapeseed oil (e.g. 1-2 tablespoons/day) may be helpful, on the condition that intakes of n-6 fatty acids from other sources are minimised and that there is sufficient zinc in the diet to support the enzymatic conversion.  This means ensuring about 15mg elemental zinc a day, consumed in fish, meat or supplements, taken away from wheat, which contains phytates that bind the zinc and prevent it from being adequately absorbed.

Another useful source of ALA for vegetarians and vegans can be oils from microalgae that have been shown to elevate levels of EPA and DHA when 1-2 g are taken per day.

For those who do eat oily fish or fish oil, especially where the source is known to be free of contaminants, life is somewhat simpler as increasing intakes of long-chained n-3 fatty acids that include several hundred milligrams each of EPA and DHA is straight forward.

The difficult bit – what else is in an edible oil?

There are other issues with vegetable oils that need to be taken into account.  Many suppliers either don’t have any information on these sorts of issues, or they are not prepared to make them public.  Some of the best producers and suppliers will give clear answers to all of these.

Some of the additional things that have a considerable bearing on the quality and health properties of the edible oil, be it olive or rapeseed sources, are: