Home News Are the knives out for raw milk in the UK? 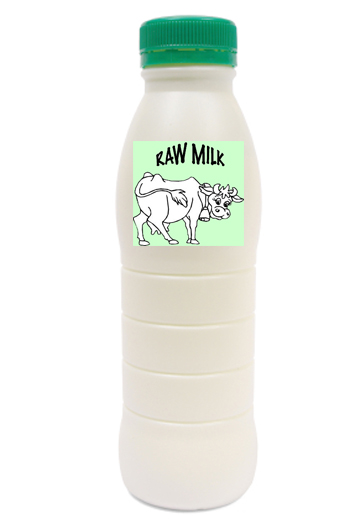 Are the knives out for raw milk in the UK?

Faulty reasoning at the heart of suspiciously timed media articles

So-called ‘livestock-associated’ methicillin-resistant Staphylococcus aureus (MRSA) has been found in British milk for the first time. But are the accompanying media reports all they seem to be?

Newspaper readers in the UK were recently treated to headlines such as New MRSA superbug strain found in UK milk supply and MRSA found in our milk: Superbug strain can cause serious infections in humans and is resistant to antibiotics. The media stories stemmed from a report in Eurosurveillance, the open-access, peer-reviewed bulletin of the European Centre for Disease Prevention and Control, summarising an analysis of 1,500 samples from bulk milk tanks held on dairy farms throughout the UK. 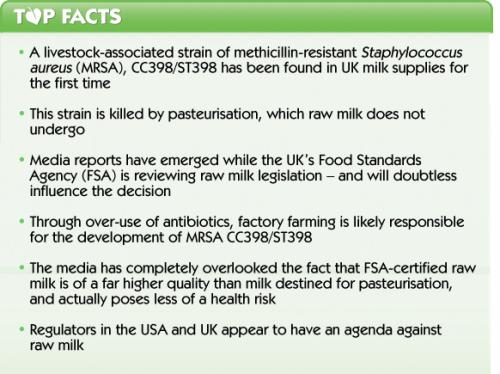 The researchers responsible for the Eurosurveillance report were looking for a specific MRSA strain, CC398 (ST398), known as 'livestock-associated MRSA' or simply 'pig MRSA' – which has now been isolated in British milk. First identified in the Netherlands in 2003, MRSA CC398 is epidemic among European and North American pig populations, and appears to be slowly spreading into the human population as well: in the Netherlands, 39% of human MRSA cases involve CC398. Because MRSA is resistant to many of our most potent and widespread antibiotics, and not methicillin alone, the public health risks from MRSA are highly significant.

We don’t have to look far to find the culprit for the development of MRSA CC398: factory farming. Antibiotics are used routinely both to prevent disease from spreading among the closely packed ranks of animals and to promote growth. The likelihood of antimicrobial resistance developing increases when farmers use low-dose antibiotics as a disease-preventive measure or fail to administer the full course of antibiotics.

Dr Mark Holmes, a veterinary scientist at Cambridge University, led the hunt for CC398. He pointed out in 2011 that pasteurisation kills MRSA in milk from infected cows, so the 99% of UK milk that is pasteurised will be safe to drink. That, of course, excludes raw milk and products made from it, a fact noted in the media reports.

Coincidentally enough, the UK's Food Standards Agency (FSA) is in the early stages of reviewing the legislation governing the sale of raw milk, with the results due before the end of 2013. With an issue of potentially huge public health significance as MRSA CC398 now on the public agenda, things could look bleak for raw milk – as perhaps they should, if there is any chance that people might eventually drink infected raw milk and contract the deadly MRSA.

Raw milk is not the problem!

But hold on. The devil, as always, is in the detail; and the detail in this case lies in the fact that raw milk certified by the FSA as fit for human consumption is profoundly different from so-called 'commodity milk' destined for pasteurisation. According to Philip Ridley, London Chapter Leader of the Weston A Price Foundation (WAPF), “Commodity milk without a raw milk licence is frequently contaminated with a whole host of pathogens, principally because the farmer is satisfied that the milk will be heat treated. Furthermore, in raw dairies, cows are taken off milking as soon as there is any sign of infection or need for antibiotics. Indeed, the entire herd will be taken off milking for raw drinking milk with even the slightest anti-bodies to tuberculosis and other infectious diseases in just one cow, and they are tested far more frequently and to a higher standard.”

Let us be clear about this: MRSA CC398 is a clear public health threat that should be guarded against; but, as Mr Ridley observes, pasteurised milk actually poses a greater threat than raw milk: “Many disease outbreaks occur when commodity milk goes through a faulty pasteurising unit, simply because such high levels of infection were permitted in the bulk tank”.

Two birds with one stone

None of this vital information made it into the mainstream media. And although none of the articles we've seen has attacked raw milk because of a supposed MRSA risk – yet, at least – we find the timing of this information release somewhat suspicious. If, as some have suggested, the UK government has covered up the presence of MRSA CC398 on its shores for many years, the reasons for releasing the information now become even murkier. Perhaps, if keeping a lid on the fact any longer had become impossible, the authorities decided to kill two birds with one stone – by admitting that MRSA CC398 is in the UK at a time guaranteed to increase the chances of a ban on raw milk.

If that sounds too conspiratorial for you, bear in mind that regulatory convergence between the USA and Europe is gathering pace, and raw milk has been a prime target of US authorities for some time. While the FSA currently tolerates raw milk sales, we're pretty sure it would love to slap even more restrictive legislation on it or ban it altogether, doubtless while trotting out the usual rubbish about 'protecting public safety'. After all, in the minutes of a 2012 FSA Board meeting, the FSA states its belief that raw milk and cream poses “inherent risks”, despite the very same document pointing out that, “There have been no reported outbreaks of illness associated with raw drinking milk or cream in the UK for over 10 years”.

At the very least, media reports of a previously undiscovered MRSA strain in the UK milk supply are highly likely to influence the FSA Board members who will decide on the future of raw milk regulation in the UK this year. We can only speculate whether the timing was deliberate, and if so, who is driving the agenda to restrict or end the sale of raw milk in that country. As Maryn McKenna, author of the book Superbug, says: “Watch out, British raw-milk drinkers.”