What are the implications of Khalifa&rsquo;s disappearing sarcoids?

Animal testing of novel drugs and other treatments is a routine part of establishing evidence of effectiveness and getting the regulatory approval required for commercialisation.  Most drug testing is done on small mammals like rats, mice and rabbits, but some also involves non-human primates.  These animals are used as a commodity, and many are harmed or mistreated prior to being killed.  People for the Ethical Treatment of Animals (PETA) estimate that, in the USA alone, “124,000 primates are abused and killed in invasive, painful, and terrifying experiments”.

But not all testing needs to be invasive, painful or terrifying. 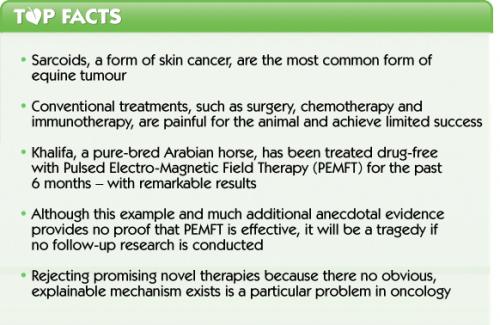 Enter Khalifa.  Not a chimp or a gibbon, but a pure-bred Arabian horse.  Alisa is the first animal to be subjected to a form of electromagnetic treatment called Pulse Electro-Magnetic Field Therapy (PEMFT), about which we reported a few months back. But rather than being an experimental animal, Khalifa lives a good life in the only pure-bred Arabian (Asil) stud in the UK, near Preston-on-Wye, Herefordshire.

As a 5-year old colt, Khalifa was suffering badly from the most the common tumour type facing horses: sarcoids.

Sarcoids are the most commonly occurring equine skin tumour. They are likely to be associated with bovine papillomavirus (BPV), and their viral pathogenesis may be at least in part responsible for their spread within an animal.  They have been problematic for horses and their owners for centuries, partially because available treatments give such variable results and are often somewhat savage and painful for the animal.  Conventional treatments include banding with rubber rings, surgical excision, cryosurgery, immunotherapy by injection with BCG (Bacillus Calmette-Guérin), radiotherapy and use of topical or injected chemotherapy agents.

Jenny and Tony Lees, owners of Khalifa’s stud, Pearl Island, wanted to try something different.  Around 5 months ago, a PEMFT device was installed in Khalifa’s stable.  Khalifa has experienced no negative side effects, but his owners have been stunned with the changes they have seen occurring over the last few months.

Jenny Lees told us, “Khalifa has got sarcoids around the sheath and this is a very difficult area to treat conventionally even if there was a suitable treatment.  In the past, we’ve had to rely on the sarcoids being burned off with toxic chemicals or them being injected with BCG after being banded.  It’s often ineffective in the long term, is nasty for the horse and requires a lot of vet time during treatment, so is expensive.  But since the [PEMFT] device has been fitted in Khalifa’s stable, the results have been remarkable.  We’ve seen no further development or growth in any sarcoids.  Even more amazingly, over the last 4 or 5 months since the device was fitted, we’ve witnessed their steady and uniform shrinking, getting crusty and simply flaking off.”

Dr Michael Clark, who fitted the device, reckons on Khalifa needing around 6–8 months of exposure to the device for complete results – so things look fully on track for this lucky colt.

We asked Dr Clark for his views, and he provided us with the following:

Pulsed Electro-Magnetic Field Therapy (PEMFT) involves the application of specific power and frequency levels of pulsed electromagnetic fields to assist in boosting immune system response and thereby assist self-healing.  This type of therapy is relatively new and remains at the edge of conventional and complementary medicine, despite many scientifically validated articles that confirm and attest to its efficacy.

The application of this individual treatment originates from observational data derived from both human and animal patients that have benefited in the past from cellular status correction and improvement of a number of conditions.  PEMFT has been well established for the use of cellular stimulation in both human and animals, with documented success.  In this case, it involves a magnificent 5-year-old Arabian endurance and breeding stallion.

Although not proven, it is highly likely that contracting sarcoids is an indication of a severely depleted immune system, which may also be linked to the BPV virus.  Given this possibility, it seemed logical to approach the problem from this perspective in the first instance.  A drug-oriented approach relies on treatment without recourse to cause or nutrition, which could be a dominant factor in the dismal success rate of equine sarcoid treatment.

The trial consists of continual treatment of the whole animal using a Magnafield MF 2200 PEMFT device set at 0.5Hz and extremely low power (8V 1A), and operating on a 20-minute duty cycle. The unit produces a field of some 2.5 m x 3 m, which is sufficient to envelope the horse when it is standing in close proximity to the field coil.  The coil is placed in a specifically designed cradle suspended from a roof beam within the animal’s stall, and with all cables and the Magnafield unit safely out of reach.

The duty cycle of the MF2200 Magnafield unit comprises 20 minutes on at 0.5 Hz, followed by 20 minutes off.  The unit is left switched on at all times and this 20/20 cycle is repeated continuously.  The rest cycle is designed to avoid cell fatigue, which can compromise the efficiency of the treatment.

A daily observation sheet that includes a weekly comment section is filled in by those responsible for monitoring the animal’s progress.

It has now been 6 months since the trial began, and the horse has been monitored throughout with photographs taken of the sarcoids at monthly intervals.  The results so far have been nothing short of remarkable.

Sarcoids on Khalifa's sheath at start of treatment (5 months ago) (left) and today (right). Sarcoids can be seen regressing in right image, having developed no further and are now crusting and flaking off

Without any drugs whatsoever, and retaining his normal diet, the horse showed almost immediate signs of improvement from the first day of treatment.  The scar left by lancing one of the biggest of the sarcoids has healed so quickly that hair is now growing back, and there are no signs of returning infection – as usually occurs.  The horse was badly infected in its groin area which, as you can appreciate, is not good for a breeding stallion.  These have shrunk and continue to shrink so much so that the horse will be completely clear of the infection in less than one year.

Animals of any kind are the best patients in the world.  They carry no ‘baggage’.  They rarely, if at all, complain, and if something is doing them good they gravitate to it of their own accord.  In my view, all zoos should have this type of system fitted to keep their animals in better condition.

It is extremely gratifying to start a PEMFT treatment in an attempt to ease and hopefully improve the condition of a distressed animal, and then to see how quickly the animal responds and how beneficial the treatment is.  The horse I saw a couple of weeks ago is the same horse that began treatment – but, with positive signs that the sarcoids are diminishing rapidly, it is in such remarkably good condition that it is, in essence, not the same horse.  This new one bears the same name and is identical in every respect, with the exception of the high gloss of its coat and the energy levels he now displays.

I am hoping that this case will be the first of many, because sarcoids are legion throughout the equine world and have plagued horses for centuries.  The most encouraging aspect is that no drugs were used in making this horse well again.  That is a singular achievement as far as I am concerned, and one which I will carry forward.

Not wanting to dampen Michael’s fire, Khalifa’s apparent response to treatment provides no evidence of effect of treatment.  This is because sarcoids can spontaneously regress for no apparent reason.  And even if Khalifa was responding to treatment, until many horses have been evaluated, there is no evidence that all, or most, horses, will respond.

But Khalifa is far from the only animal, or indeed even human, on which PEMFT has been trialled.  And Khalifa’s response is one of a very large number of positive responses witnessed by many people using PEMFT in different parts of the world.  Animals like Khalifa are always interesting subjects for such treatments, because the device installed on the roof of his stable is unlikely to induce any placebo effect.

While healthy skepticism is a prerequisite to good scientific methodology, shutting your eyes to novel therapies just because you might not understand the mechanism at work is now – in our view – one of the biggest roadblocks to the prioritisation of relevant research on cancer.

Thanks to people like Michael Clark, the evidence, albeit initially anecdotal and one animal or human at a time, continues to be gathered.  To ignore any body of anecdotal evidence of this kind would be a travesty, but unfortunately similar travesties occur all too often, especially in the field of oncology.

We’ll certainly be doing what we can through our own contacts and networks to ensure that technologies like PEMFT become the subject of more thorough evaluation and research.