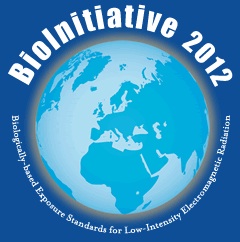 A newly released update of The BioInitiative 2012 Report reveals most of society is at risk from ubiquitous electronic devices like mobile and cordless phones and wireless technologies.

Far from allaying our concerns about electromagnetic frequencies (EMF) emitted by these types of technologies and demonstrating that public health policy is taking the risks seriously, the scientific updates since 2007 show an even more disconcerting picture.  They reveal instead that the risks to health from EMF, including extremely low-frequency (ELF-EMF) and radiofrequency/microwave fields (RF-EMF), have substantially increased since 2007.  Among the report's findings is a consistent pattern of brain tumour risk with the use of mobile/cell and cordless phones, and substantial threats to fertility and reproduction from wireless laptop use, and even cell phones kept in a pocket on standby.  The report also includes drastic public health policy recommendations.

The editors of the report state that, “The BioInitiative 2012 Report has been prepared by 29 authors from ten countries, ten holding medical degrees (MDs), 21 PhDs, and three MsC, MA or MPHs.  Among the authors are three former presidents of the Bioelectromagnetics Society [BEMS], and five full members of BEMS.  One distinguished author is the Chair of the Russian National Committee on Non-Ionizing Radiation.  Another is a Senior Advisor to the European Environmental Agency”.

With its authorship pedigree established, the meat of the update comes in the form of damning results from approximately 1800 new studies.  Published during the last 5 years, the studies provide reinforced evidence of risk from chronic exposure to low-intensity EMFs and wireless technologies (RF-EMF).  Let's be clear — these 1800 are an addition to the many thousands of preceding studies that warned of problems in the previous four decades.

Another key point frequently made in the report is that health risks are posed not just by the heating effects of the radiation, but by the actual frequency itself.  Hence the term 'extremely low-frequency'.  The report tells us that effects are reported at exposure levels ten to hundreds or thousands of times lower than allowed under safety limits in most countries of the world, and that the range of possible adverse health effects with chronic exposure has broadened.  It makes clear that no government has as yet instituted comprehensive reforms, and that current safety limits are way too high.

How safe are you?

Very large studies were completed on brain tumour risk from cell phone use.  The 13-country World Health Organization (WHO) Interphone Final study (2010) suggested that radiofrequency/microwave radiation from cell phones is a very effective cancer-causing agent.  Cell or cordless phone use of 10 years or more, with approximately 1640 hours of cumulative use, approximately doubled glioma risk in adults.  Studies by Lennart Hardell and his research team at Orebro University in Sweden showed that early use of a mobile phone by children resulted in more than a 5-fold risk for developing a glioma by the age of 20–29 years.  The authors stress that this has significant ramifications for public health.

In addition, new studies have revealed substantial adverse effects on fertility and reproduction.  They catalogue problems caused by cell phones simply kept on standby on men’s belts or in their pockets, and the effects of wireless laptops on the quality and motility of sperm, as well as sperm death.  There have been important studies of the foetus, infants and young children that confirm their extreme vulnerability to EMFs.  EMF exposure in utero has been linked to increased asthma and behavioural problems in the human child, while cell phone radiation exposure during pregnancy has been linked to attention disorders, hyperactivity and impaired memory function in baby mice, similar to effects seen in human babies.

BioInitiative 2012 also reveals new evidence for links between EMF and childhood leukaemia, breast cancer and Alzheimer’s disease, as well as electro-hypersensitivity and effects on the blood-brain barrier.  It reports evidence that EMF can damage modulating signals to human stem cell DNA, so that it does not adapt or repair in the normal way.  There are also further studies on the effects of mobile phone base stations (wireless antenna facilities or cell towers) that reveal that, over time, the ELF-EMF and lower radiofrequency radiation levels can result in adverse health impacts.

Beings of resonance: why are we so affected by EMFs?

The powerful documentary ‘Resonance: Beings of Frequency’ explains that there is a natural resonance around the earth itself (the Schumann resonance), and a natural resonance within our brains (alpha waves, discovered by Hans Berger).  These happen to be of the exact same frequency: 7.83 Hz.  It seems we have evolved to function at the Earth’s resonance, and perhaps only at the Earth’s resonance.

Key scientific findings summarised in BioInitiative 2012 contribute to a, “Better understanding of the important physical and biological factors that make ELF-EMF and RFR [radiofrequency radiation, another term for RF-EMF] potent disruptors of living tissues and basic metabolic processes”.

Even a cursory glance at the report should convince many that we're sitting on a potentially huge time bomb.  The question is, do we have to wait for it to detonate before we take action?  After all, a safer alternative is now available in the form of fibre optic cables, which don't compromise on speed or proficiency.  As the report concludes, maintaining the current status quo is not acceptable in light of the wealth of evidence for harm.  The time to act is now, before too many more are sacrificed at the altar of corporate profits.

Hopefully, it's not too optimistic to think that the telecoms industry has seen the writing on the wall regarding EMF for a number of years, and have been using the wall of resistance as a stalling tactic while they hustle to make ready the new, safer technology.

What you can do:

A ‘snapshot’ of the new studies included in BioInitiative 2012