European Food Safety Authority gets out the whitewash yet again

We’ve been here before. The European Food Safety Authority (EFSA) once again acts as a poodle for Big Food by declaring aspartame safe – throwing science and precaution to the winds in the process.

Aspartame is possibly the most controversial food additive in widespread use, with an enormous list of self-reported symptoms linked to its consumption.  Ever since it was approved throughout the European Union (EU) in 1994, research has questioned aspartame’s links to adverse health effects ranging from headaches to cancer. New research even indicates that aspartame may promote obesity. 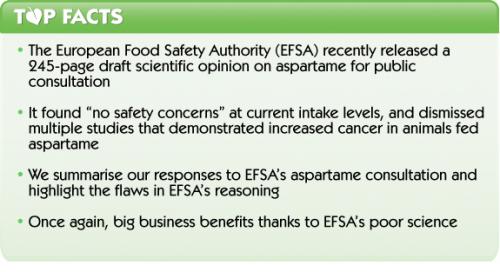 Since 2006, EFSA on three occasions dismissed animal studies that reported increased cancer incidence in rats and mice fed aspartame.  Its most recent scientific opinion found that, “The relevance of the statistical analyses presented by the authors cannot be assessed...Older animals are more susceptible to illness...includ[ing] spontaneous tumours...the hepatic and pulmonary tumour incidences...fall within their own historical control ranges for spontaneous tumours...” It goes on, but you get the point.

Now, EFSA’s ‘hat trick from hell’ has become a baleful quartet. Asked by the European Commission (EC) for a definitive opinion on aspartame’s safety, EFSA has incorporated its previous reports into a 245-page monstrosity: its Draft scientific opinion on the re-evaluation of aspartame (E591) as a food additive. And, in the least unexpected result of 2013 (so far!), EFSA has concluded that, “There were no safety concerns at the current ADI [acceptable daily intake] of 40 mg/kg bw/day”.

ANH-Intl submitted comments to the public consultation on EFSA’s draft opinion at the end of last week, and the comments below are based on our consultation response. We focused primarily on the breathtakingly cavalier manner in which EFSA has repeatedly dismissed the findings of researchers led by Professor Morando Soffritti, Scientific Director of the Ramazzini Institute (RI) in Bologna, Italy, whose group performed the studies that prompted EFSA’s post-2006 scientific opinions.

Contrary to EFSA’s portrayal, however, the Ramazzini Institute isn’t staffed by scientific incompetents with an anti-aspartame fixation. It’s actually one of the world’s most prestigious and respected centres for research into occupational and environmental health; in fact, the US National Toxicology Program (NTP) and the RI are the two largest, longest-existing, and most well-established bioassay programs in the world, which were found to produce largely consistent results in a 2002 review. The RI was the first laboratory to describe associations between cancer and certain substances now known to be human carcinogens, including vinyl chloride, acrylonitrile and benzene.

But the main plank of EFSA’s dismissal of the RI’s aspartame data was an accusation that their experimental animals were riddled with mycoplasmosis – and that, “Chronic inflammatory changes in the lungs and other vital organs” obscured the results.  Given the RI’s pedigree, this would be an astonishing lapse, especially bearing in mind comments made by NTP workers in 2008: “Descriptions of environmental conditions in the ERF are that such conditions that exacerbate mycoplasmosis (e.g., excessive ammonia levels) do not appear to be present at the ERF...The most detailed description of laboratory protocols and practices of the ERF are consistent with acceptable care”.

There are two huge reasons why the RI’s research should be taken seriously by regulators. One, it is independent and therefore free of industry bias; and two, it employs a ‘human equivalent’ experimental protocol, as explained – directly to EFSA, no less – by Dr Fiorella Belpoggi of RI in 2011. This goes well beyond the level of evidence usually required by EFSA, since neither the Organisation for Economic Co-operation and Development (OECD) nor Good Laboratory Practice (GLP) guidelines accurately reflect human exposure to environmental carcinogens. By studying their effects across the animals’ lifetime, from foetus to natural death, the RI’s protocols are a distinct improvement.

All of this makes EFSA’s claim that chronic lung infections in the experimental animals obscured the results even less reasonable, in our opinion. Since lung infections occur more frequently in old age, both in humans and rats, an increased rate of lung infections is an entirely predictable and expected observation – hardly a reason to bury the results!

Parallels with Séralini – and Coke

Another high-profile, worldwide issue with enormous implications for human health is genetically modified (GM) crops. Oddly enough, EFSA recently went to enormous lengths to dismiss another set of scientific findings, this time on GM maize and Roundup fertiliser.  Séralini et al’s work wasn’t perfect, but neither should it have been jettisoned in favour of the biotech industry’s view that GMOs are perfectly safe. The consequences of EFSA’s attitude for big business is crystal clear from Coca-Cola’s aspartame safety page: the Coke and EFSA hymn sheets are practically identical.

Science is more than cause and effect

We’ve pointed out the inherent flaws in EFSA’s approach before, most notably with its approach to health claims. EFSA seems to think that science is worthless unless it can prove a cause and effect relationship between a substance, such as aspartame or GM crops, and a health effect, such as cancer. In reality, science is an ongoing conversation where positions must be built on the weight of evidence. Only by applying tortured logic and double standards can EFSA maintain that aspartame is entirely safe at current levels of consumption. Unless someone can come along and prove in one fell swoop that aspartame causes cancer (or headache, or dizziness, or anything else) in humans, EFSA can work its black magic and dismiss adverse findings.