Home News GMO update: It’s us against them! 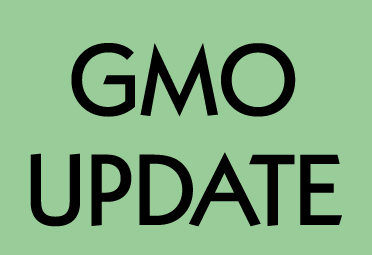 GMO update: It’s us against them!

Farmers say 'no' to GM while governments push for easier approvals

As we predicted, 2013 is already promising to be a landmark year in the struggle against genetically modified (GM) crops. Here’s our update on four important threads in the wider GM story.

Indiana farmer Vernon Hugh Bowman entered into a contract with Monsanto to grow ‘Roundup Ready’ GM soybeans as his main crop. However, when he needed something cheaper for a riskier, late-season crop, he hit a brick wall: “He couldn’t reuse his own beans or buy seeds from other farmers who had similar agreements with Monsanto and other companies licensed to sell genetically engineered seeds. And dealers he used to buy cheap seed from no longer carry the unmodified seeds”.  Bowman took advantage of an apparent legal loophole and planted cheaper seed destined for animal feed, milling and other uses. Monsanto, true to its highly litigious nature, sued him – and the case has gone as far as the US Supreme Court. It was heard yesterday, 19th February, and a decision is awaited. 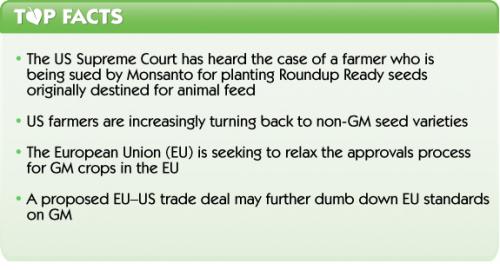 Farmers turn away from GM

Despite the repetitive claims of biotech firms, the evidence shows that GM crops do not provide consistently increased yields compared with conventional crops. Now that many US farmers are turning back to non-GM seed varieties in search of higher yields and increased profits – the very temptations used to hook farmers onto GM in the first place – we await the biotech industry’s response with interest.

The European Union (EU) has clearly decided to help the biotech industry to push GM for all it’s worth. Its latest salvo in the ongoing mission to force-feed poisonous and unwanted GM crops to EU citizens was recently revealed by Earth Open Source (EOS): a presently low-profile move to relax the legislation around GM crop approvals.

EOS’ concerns appear well founded. Although the draft document makes 90-day rodent feeding trials mandatory for new GM crops intended for use in food or animal feed, long-term feeding trials are not even mentioned. No wonder EFSA was so keen to bury the findings of Séralini et al! And even then, the text contains a handy get-out clause, stating that such trials may be waived if they are “not necessary owing to the nature of the genetic modification or of the product” or if “it is not scientifically necessary, or technically possible”.

Article 5 and Section 1.3.2 of Annex II describe the experimental protocols required to demonstrate ‘substantial equivalence’ between GM crops and their non-GM equivalents, including a “specified minimum size” of difference below which the two are considered equivalent. The dangers of ‘substantial equivalence’ are well explained by Dr Michael Antoniou of King’s College London in an article for the Institute of Responsible Technology.

As EOS says, if adopted, this new legislation will, “Tak[e] the EU down the US route of almost non-existent GMO regulation”. Our only point of difference with EOS is that the draft legislation will apparently come up for a vote in the European Parliament at some point, since, “The European Parliament and the Council have been informed of this proposal”.

As if wrong-headed new EU legislation wasn’t enough, a proposed trade deal between the US and EU will put further pressure on the EU to dumb down its GM approval laws. According to an EC memorandum, “The Transatlantic Trade and Investment Partnership will aim to go beyond the classic approach of removing tariffs and opening markets on investment, services and public procurement.  In addition, it will focus on aligning rules and technical product standards which currently form the most important barrier to transatlantic trade”. We have little doubt that the US will want to see the EU’s more stringent GM approvals and labelling regime relaxed, opening the floodgates for US GM products to enter the EU.

These stories make it clearer than ever that GM is the ultimate ‘us against them’ issue. Please spread the word and get involved – we’ve stopped GM before and it looks like 2013 may be the year we do it again!