Home News Would you buy traditional Chinese medicine from Nestle?

Would you buy traditional Chinese medicine from Nestle?

Food giant Nestlé will soon be developing traditional Chinese medicine (TCM)-based products in alliance with a company run by Asia’s richest man.  Sign of the times – or something more sinister? 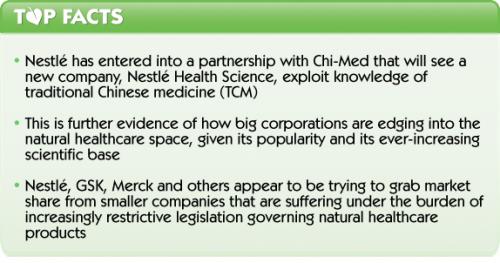 Keep an eye on Nutrition Science Partners Ltd (NSP).  This innocuously named company is being set up as the vehicle of the newly formed partnership between Nestlé Health Science and Hutchison China Meditech Ltd. (Chi-Med).  According to the union-busting, baby formula pushers, “NSP will research, develop, manufacture and market innovative nutritional and medicinal products derived from botanical plants”.  Gastrointestinal medicine will be NSP’s first focus, with future ventures into metabolic diseases and brain health planned.

NSP will be backed by truly formidable resources: not only is Nestlé currently the world’s 71st largest company, with annual profits of $10,691 million, but Chi-Med's chairman is Li Ka-shing, Asia’s richest man.  Chi-Med’s parent company, Hutchison Whampoa, is at number 362 on the world’s biggest companies list.

Accessing the library of life

Farmer-exploiting, genetically modified (GM) food-loving Nestlé observed that, “Nestlé Health Science [will gain] access to one of the world’s leading Traditional Chinese Medicine libraries,” in its tie-up with Chi-Med, a library that contains “More than 50,000 extracts from over 1,200 different herbal plants”.  In the immediate future, NSP intends to complete the development of HMPL-004, an extract of Andrographis paniculata, an herb with a wide range of action that is used in many traditional systems of medicine.

From commons to corporate plaything

Chi-Med’s own description of HMPL-004 can’t find the space to name the herb from which it was extracted, giving a pretty good idea of how ‘traditional’ the medicine evolving out of NSP will be.  Clearly, NSP will be a phytopharmaceutical operation, based on identifying, extracting and purifying active ingredients from the parent herb.  At best, the products will be ‘standardised extracts’, where the supposed active plant compound is at least accompanied by other naturally occurring chemicals present in the herb itself.  At worst, like HMPL-004, they will be pharmaceutical drugs consisting of an isolated active ingredient from the herb, highly concentrated and deposited within a pharmaceutical medium, such as a synthetic polymer.  To be fair, Fairtrade-avoider and polluter Nestlé doesn’t try to hide the fact, describing NSP’s brief as being to, “Research, develop, manufacture and market innovative nutritional and medicinal products derived from botanical plants”.  NSP undoubtedly hopes to repeat the success of Fulyzac (crofelemer), recently approved by the US Food and Drug Administration (FDA), “To relieve symptoms of diarrhea in HIV/AIDS patients taking antiretroviral therapy”.

All part of the plan

We’ve been reporting for some time on the gameplan that Big Pharma is working to, and now it appears that Big Food is getting in on the action, too.  As the regulatory noose tightens around the necks of natural products companies worldwide, the big boys use their financial clout to muscle in on the billions of juicy potential profits that will become available after the market has been cleared of potential competitors.  All of this aided, of course, by the Greek chorus of fraudulent anti-natural medicine science and the fringe antics of the noisy ‘skeptic’ movement.  As we said before, “Quite simply, the drug companies want to corner the market with their patented vitamin [and herbal] drugs and prevent us from getting good products from anywhere else.  You know the expression: if you can't beat them, join them?”

For us, however, the only way to beat them is to get aware, get angry – and get involved!  As a first step, please share this story widely via email, Twitter, Facebook or whatever form of social media you prefer.