Home News Big Pharma: the biggest quacks of all? 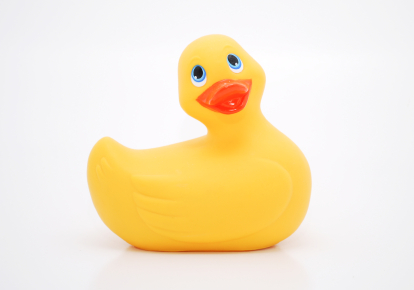 Big Pharma: the biggest quacks of all?

OK the judges have finished their deliberations, all the votes are in and it is time to roll out the blushing red carpet of shame and announce the worthy winner of this year’s Silver Bullet for the most egregious medical quackery.

Many thanks to all of you who took time out from your busy on-line lives to vote, although I’m sorry none of you ticked my favourite for sheer barefaced cheek – the makers of the old Alzheimer’s drug Aricept, who massively boosted profits simply by putting out a higher dose pill that came with extra side-effects. This was apparently worth a three year extension of the about-to-expire patent.

The cases highlighted by medical and science journalist Jerome Burne as candidates for the inaugural ‘Silver Bullet Award’ perfectly capture, in microcosm, why it’s well past time to reclaim the term ‘quack’ from the anti-natural healthcare crowd.

Here’s a couple of interesting ‘quack facts’ for you. First of all, the term ‘quack’ may originate from the German word ‘quecksilber’ – mercury to you and I. This usually highly poisonous substance was one of the mainstays of orthodox medicine for several centuries, and the term ‘quack’ became a widespread euphemism for ‘doctor’ from the 17th century. Which seems fairly polite for people whose treatment of many diseases could result in your face falling off. Another theory of the derivation of ‘quack’ involves a Dutch term, ‘quacksalver’, which we are told means ‘hawker of salve’. Unsurprisingly, lovers of orthodox medicine have enthusiastically promoted the latter definition.

Secondly, the man who more than any other was responsible for building the power of the American Medical Association (AMA), Dr George H Simmons, began his career as a journalist before obtaining a mail-order medical degree from Rush Medical College in Chicago. One of ‘Dr’ Simmons’ advertisements shows not only that he described himself as a homeopath, but that he also advocated a quack remedy called ‘compound oxygen’. His homeopathic credentials, if genuine, may have been Simmons’ least ‘quacky’ aspect. Interestingly, Morris Fishbein, Simmons’ AMA contemporary and the man who, as editor, raised the power and profile of the Journal of the American Medical Association (JAMA), was also trained as a journalist.  He too obtained a mail-order medical ‘degree’ from Rush, and admitted under oath in 1938 that he had never practised medicine a day in his life. 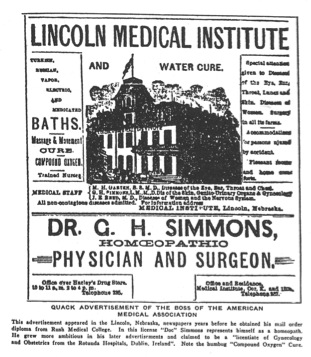 So who are the real ‘quacks’? The inaugural ‘Silver Bullet Award’ went to, “The three companies who were fined an astonishing total of 6 billion dollars for illegal marketing and other misdemeanours”. At least one of these companies, GlaxoSmithKline (GSK), clearly considers $3 billion fines the cost of doing business, while fraud is endemic throughout Big Pharma.

But that’s only the tip of the iceberg. Read books and articles by Ben Goldacre and Marcia Angell, and the truth becomes abundantly clear: we simply can’t trust data provided by drug companies, no matter how large, well randomised, blinded, placebo-controlled or ‘gold standard’ they may be. Dig even further, perhaps by reading Stats.con by Dr James Penston, and it becomes difficult to disagree with his conclusion that, “The claims of statistics-based research in medicine are, for the most part, imaginary, that the apparent success is based on the presentational skills of its advocates and that the studies are devoid of anything of real value”.

While the smoke-and-mirrors charade of industrial, drug-based, statistics-led medicine trundles on, thousands of patients are killed and maimed every year. But the cries of ‘quackery’ are almost universally aimed at natural healthcare, which the figures show to be incredibly safe, while its users enthusiastically keep coming back for more – as they have done for centuries.

So who are today's greatest purveyors of quackery? Those sitting at the boardroom tables of pharmaceutical companies, clearly. Advocates of natural healthcare should feel entitled to reclaim the term, and to use it appropriately – without fear of retribution.