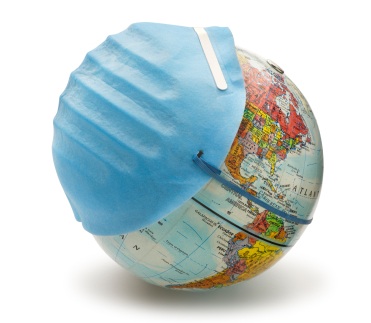 A new bird flu rears its head in China

Will the latest H7N9 variant gather steam, and what should we expect in the coming days and weeks?

Many of us are somewhat jaded by pandemic alerts.  Do they reflect a genuine threat, or are they a mechanism to generate profits for drug and vaccine companies?  In recent years, we’ve faced SARS (2002/3), bird flu (H5N1) (2005) and swine flu (H1N1) (2009).  All were projected to potentially have devastating consequences on public health services around the world, and kill scores.  While around 40 million deaths were associated with the Spanish flu of 1918 (H1N1), deaths from any of these recent variants have been modest by comparison.  SARS killed 775 in 2002/3, while estimates of mortality by bird flu (H5N1, from 2003-13) and swine flu (H1N1, 2009/10) sit at 371 and 18,500 confirmed deaths worldwide, respectively.  Laboratory confirmed cases always under-estimate actual deaths.  For example, estimates of likely deaths from swine flu have been estimated to be somewhere between 151,700 and 575,400, probably more than 15 times higher.

A new variant of bird flu – H7N9 – is claiming victims in China.  Could this become the next pandemic?  Are you ready for it, or, if not the virus itself, its consequences? 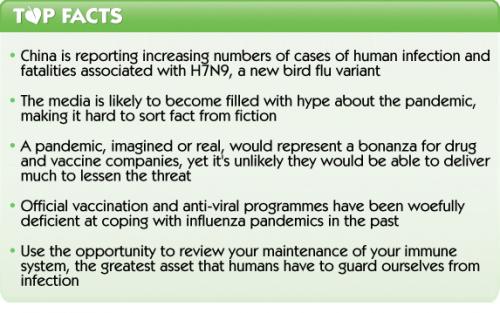 Quietly, a new virus is gaining strength in the Far East.  After the first reports of human infections and deaths due to a new form of the avian flu virus, H7N9, surfaced at the end of March 2013, further reports have since formed a steady trickle.

Official figures from the WHO suggest 82 cases in total with 17 deaths so far.

The WHO notes that, “Two confirmed cases have been associated with possible family clusters,” although, “Among the contacts who have been tested by polymerase chain reaction [PCR], none has been shown to have infection”.  In other words, there’s no evidence that the virus can spread from human to human – yet.  At this early stage, the animal reservoir(s) responsible for spreading the virus is unknown, as are the principal routes of human transmission of H7N9 and the potential for further spread.

Scientific American magazine appeared to be doing its thing to whip up concern suggesting it needed to be taken seriously, however.  “This is [sic] very, very severe disease – and rapidly progressive,” was its quote from Timothy Uyeki, an influenza epidemiologist at the US Centers for Disease Control (CDC).  Not only that, but, “Whereas the new virus doesn’t seem quite as deadly as H5N1 (fatal in about 60 percent of known cases), it still packs a scary punch” – one current estimate puts it at 22%.  The authors of a genetic analysis of the virus warned that its ability to replicate in mammals gives it high pandemic potential; New Scientist declared that it, “May be two mutations from a pandemic“.

At this point, with the media murmuring the ominous word ‘pandemic’ into our ears, it’s useful to step back and review what’s gone before.  The infamous bird flu H5N1 strain at one time threatened the loss of 1.4 billion lives and approximately $330 billion in economic damage worldwide.  Over the last 10 years, the WHO has reported just 622 cases, albeit with a stark 60% lethality (371 deaths).  Because of its virulence in birds, H5N1 has been easily traceable; H7N9, by contrast, causes few symptoms in birds and so may be harder to monitor.

Limitations of the preferred approach

So we should clearly be on our guard against H7N9.  Our advice is keep a close watch on the weekly reports of confirmed human cases on the WHO website.  Secondly, look after your immune system – advice that should apply for natural health aficionados regardless of any risk of a pandemic!

While the drug and vaccine companies will undoubtedly come up with various anti-viral drugs and vaccines, which they will seek to sell to governments for administration to the masses, time and time again we have seen these industries fail to deliver when it comes to dealing with influenza viruses.  The viruses have a huge capacity to evolve and develop resistance to drugs, or to mutate and outwit vaccines.

The evidence for anti-influenza drugs shows that they simply don’t work very well – while drug resistance is an increasing problem.

Vaccines have significant limitations in the context of a worldwide pandemic: they cannot be produced until the viral strain is identified, and difficulties are compounded in the case of rapidly mutating influenza viruses.

No doubt to the displeasure of the drug and vaccine manufacturers, our immune systems remain by far the most sophisticated weapons we have available to deal with influenza viruses, or any other pathogen!

These issues were covered in detail in ANH-Intl’s 2006 report, The pivotal role for natural products in countering an avian influenza pandemic.  Commissioned by the WHO, the report emphasised that a healthy immune system is by far the most effective way to avoid contracting influenza, and to reduce its effects in sufferers.  Given that food supplies may be restricted in a full-blown pandemic, nutritional supplementation will be crucial to maintaining the immune health of populations.  The report identified vitamin C, zinc and vitamin A as prime candidates for supplementation, along with a host of supporting nutrients and botanical species, from resveratrol to elderberry (Sambucus nigra).  Importantly, it would be a simple matter to scale up production of these nutrients in the event of a pandemic.

We should point out that vitamin D is not included in the report, simply because it was written prior to the avalanche of scientific research pointing to its central role in the immune system.  Neither does it cover the importance of ensuring healthy gut flora – another hot recent research topic.

Unfortunately, since the report was written, the WHO has turned its back on natural strategies in favour of the usual drugs and vaccines.  Since it’s unlikely that the WHO will change course if a genuine pandemic does actually get off the starting blocks, it's up to us to take steps to ensure a truly resilient immune system.