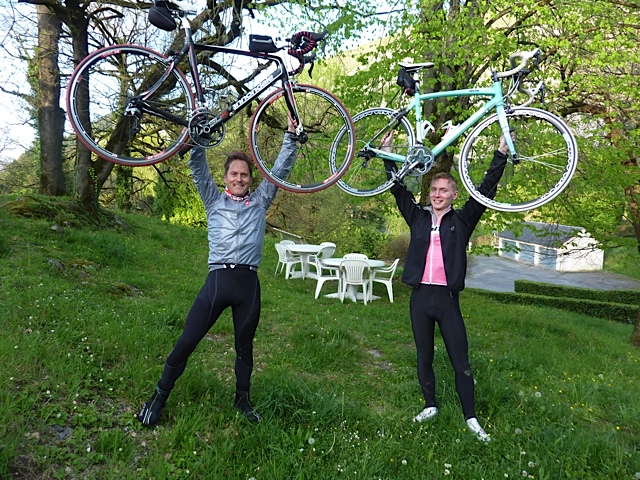 Spring is here – are you becoming more physically active?

We look at underlying cues to motivation and get inspired by the latest cycling challenge by ANH founder Rob Verkerk and his son
&nbsp;

In most parts of the northern hemisphere, spring has finally sprung, albeit belatedly.  That’s the cue for many of us to become more active again. The long, cold days of winter make it a particular struggle to get out and about and maintain the necessary levels of physical activity required for optimal health.

Our founder, Rob Verkerk PhD, recently told a practitioner conference in Falun, Sweden, that “physical activity is likely to be the single most important requisite for optimum health and wellbeing”. This piece goes some way to explaining why he has this view. 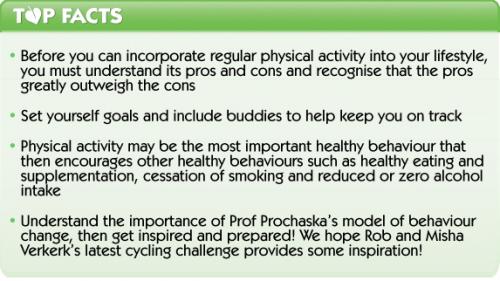 The logic used by Dr Verkerk is that unhealthy behaviours, as well as healthy ones, tend to run together. In a major study published in August 2012 by the UK think tank, the King’s Fund, it was found that four unhealthy behaviours are generally clustered. These are smoking, excessive alcohol consumption, insufficient fruit and vegetable consumption, and lack of regular physical activity.

The converse is also true. But adopting a healthy behaviour isn’t necessarily simple, as there can be many obstacles along the way. Physical activity can seem to many like too much of a bind, it may seem expensive if you think it always entails gym memberships or other regular fees, or the benefits may not seem adequate given the time entailed.

Prof James Prochaska and colleagues from the University of Rhode Island, put forward a model for health behaviour change back in 1998 that is helpful in practice. Over the years, Prochaska and his team have related the model to a wide range of behaviours, from smoking, to bad diets, obesity, excess sun exposure and HIV risk, among other things. The team proposed a model they call the ‘transtheoretical model of behavior change’ which describes the 4 different phases of adoption of healthy, or unhealthy, behaviours. These are: (1) pre-contemplation, (2) contemplation, (3) preparation, and (4) action.

Understanding this psychological sequence of behaviour change is helpful, and it may help you to understand —assuming you are able bodied— why you might not yet be ready to bounce outside and go running every other day, or go hill walking or cycling up mountains! It may be better, if you are in a pre-contemplative stage, for example, to consider what the benefits of physical activity might be, while also considering the costs of avoiding regular physical activity—long-term. In essence, as Prof Prochaska and colleagues point out, it involves weighting the importance of the pros and cons for regular physical activity.

Note: The ‘T-scores’ index shown on the vertical axes of the graphs below are a measure of ‘frequency of use’ of the specific behaviour. 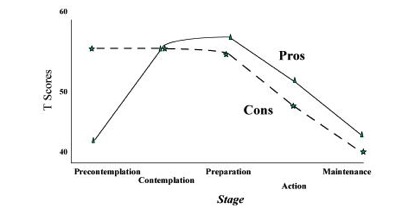 Figure 1. The relationship between stage and the decisional balance for an unhealthy behaviour (A) and a healthy behaviour (B). Source: Velicer, Wayne F; Prochaska, James O; Fava, Joseph L; Norman, Gregory J; Redding, Colleen A. Smoking cessation and stress management: Applications of the transtheoretical model of behavior change. Homeostasis in Health and Disease, 1998; 38(5-6): 216-233.

Once at the point that you feel an overwhelming desire to exercise and have got yourself to the ‘Action’ stage of the sequence, a series of other healthy behaviours will commonly follow suit. This might include making healthier dietary choices, stopping smoking or avoiding alcohol consumption. With the body being physically active — as nature intended — many physiological and biochemical processes are able to function more effectively as well. This includes detoxification, lymph drainage, neurological and mental function, and cellular regeneration. So by simply becoming active regularly, you can set up a chain of events that lead to a huge improvement in health, that go beyond those that are just linked to improving diet or taking a food supplement. In fact, it’s our experience that you are much more likely to become compliant long-term with good dietary and supplementation habits if you are able to maintain a regular pattern of physical activity.

With this crucially important background in mind, we take a glimpse below at the challenge embarked on by Rob Verkerk, and his 25-year-old son, Misha, now a junior doctor working at the Royal Victoria Infirmary in Newcastle. 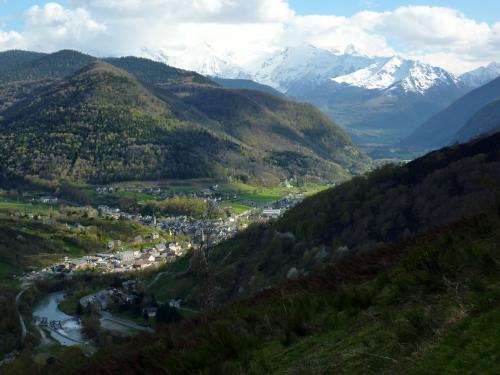 This last Saturday, 20th April, they took on a self-imposed physical endurance challenge that would test the endurance capacity of most people: a 200 km road ride in the High Pyrenees, including four major cols (mountains). In essence, father and son were testing a route that could potentially be used to establish a new sportive or ‘gran fondo’ event for fundraising purposes, starting in 2014. 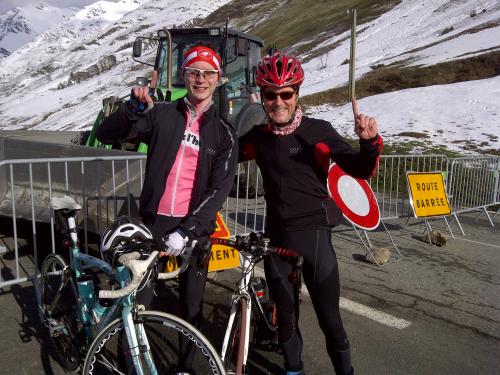 Foiled by blocked roads, father and son failed in their bid —but only just! They did go as far as they could up each mountain, losing only 4 km on the Col de Tourmalet, the col most commonly used in the Tour de France, and they were just 2 km shy of the peak at La Hourquette d’Ancizan. In both cases, the roads were impassable; Tourmalet was blocked and closed to traffic near its peak owing to avalanche risk, and the narrow road up La Hourquette d’Ancizan was completely blocked by snow, also near the top. The pair did however manage Col d’Aspin and Col d’Azet without any problems. 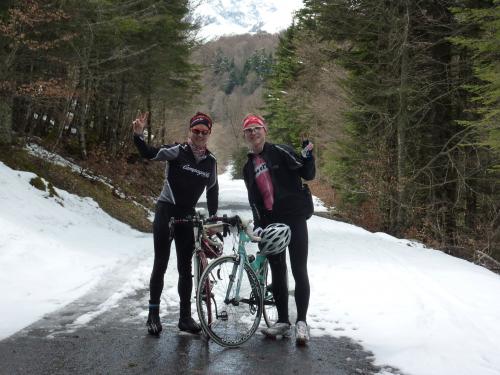 2 km shy of the second summit at Hourquette d’Ancizan, stymied by the snow

Heavy snow in the Pyrenees and road closures during the winter are obviously par for the course, but in most years all the passes are open by the beginning of April. So while the total mileage was 50 km off the original target, with the routes having to be altered to cope with the road closures and including an 85 km stint by hire car commandeered by their friend Gill who came to support their efforts, Rob and Misha were very close to achieving their overall goal. 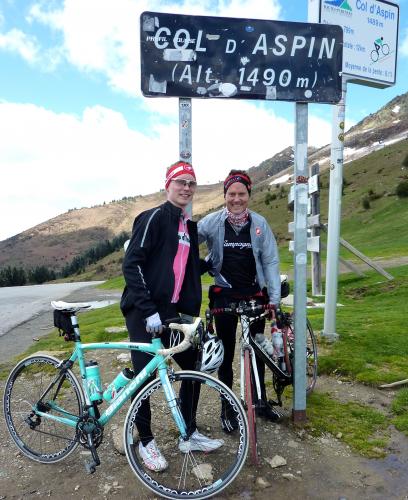 Rather than the 5250 metres of vertical elevation they had hoped to climb, they managed 5014 metres, this including an ascent of another Pyrenean behemoth, Hautacam. More importantly, they hugely enjoyed what they did, they are inspired to go back and try the complete route once the snow has subsided, and they were overwhelmed by the sheer beauty and majesty of the French Pyrenees. Rob had actually done the research for his undergraduate ecology degree in the Pyrenees over a 3-month period some 33 years before, and that was the last time he’d cycled in the Pyrenees! 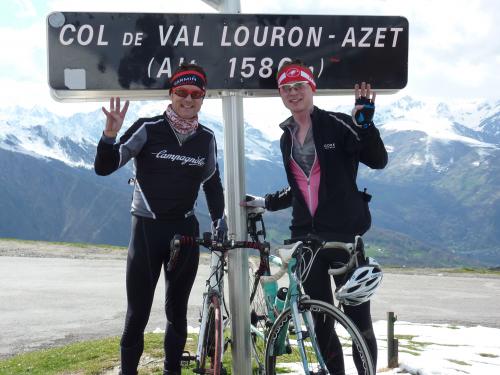 Commenting on the epic day, here’s what Rob had to say on his return:

To breathe such clean air so deeply into your lungs, is not only very good for us, it’s a privilege that fewer and fewer of us experience. After cycling the English Coast to Coast in 2011 and the Alps in 2012, Misha and I have found that setting ourselves challenging goals is what keeps us training most of the year. We’re both incredibly busy people. Most of my training is done by cycling off-road into work, a 50-mile round trip, often done with a 12-hour working day plugged into the middle. The weather in Newcastle has been horrendous this year, so Misha did most of his training in spinning classes, focusing on both high intensity interval training (HIIT) and endurance. 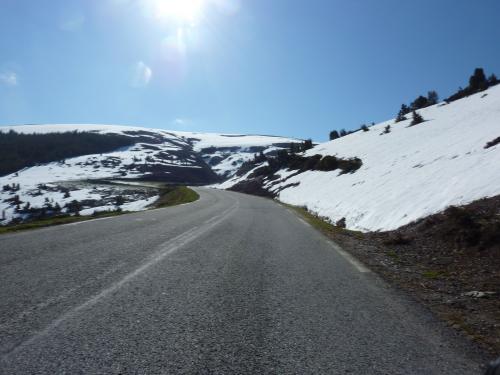 Near the top of the Hautacam climb from Argelès-Gazost

Once you are in Prochaska’s ‘contemplation’ stage, you just need to decide on your goal or goals. Setting these goals is the key – everything else then fits around it. Get them in your diary – include one or more other people in your goal so you have buddies to keep you on track. And trust me, you need that when contemplating a 6.00 am training ride in the pouring rain in mid-winter!

When you understand the benefits you get from regular exercise, not only do you tend to find the time to shoehorn the activity into your busy schedule, you find by doing this, the rest of your work becomes even more efficient. Saying we’re too busy to take regular exercise is something many of us do. I did it myself for seven years, and begun to suffer the consequences. I was moving rapidly into metabolic syndrome, I gained 20 kg in weight and I could feel my blood-sugar metabolism starting to become unsettled, encouraging me to eat little and often. And yes, all without any junk food! Just lots of stress and no exercise. For me, encouraging my body to move to efficient fat-burning, decreasing meal frequencies and training 2 or 3 times a week in a fasting state, have helped to transform my health status, wellbeing and energy levels.

But first, on the advice of James Prochaska, you need to understand the benefits, set yourself some goals and prepare yourself properly. Incorporating regular physical activity into your life may be one of the most important decisions you make: it could quite simply transform the manner by which you are set to enjoy the twilight years of your life. 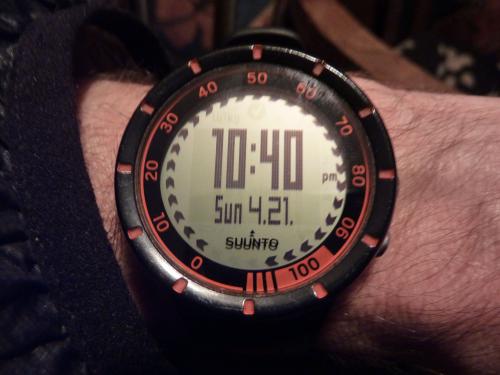 Rob’s Suunto heart rate monitor on his return to England on Sunday night telling him his body requires over 100 hours of recovery!

Be prepared for roadside repairs! 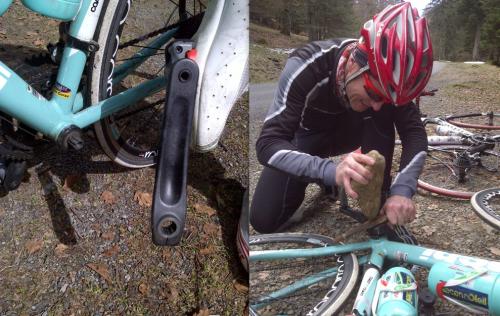