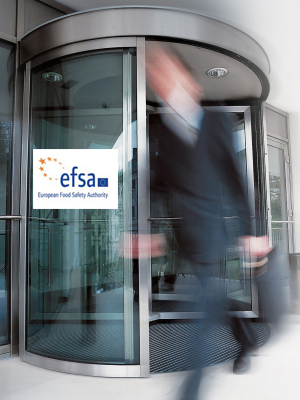 The European Food Safety Authority (EFSA) has been caught looking in two directions at once – yet again. In closing the books on a conflict of interest case that's rumbled on for more than 3 years, the European Ombudsman has revealed the inflexibility deep at the heart of EFSA. This inflexible attitude is likely to ensure that EFSA's doors continue to revolve with those of some of the world’s biggest corporations.

A decision 3 years in the making

In March 2008, Dr Suzy Renckens ended a 5-year stint heading up EFSA's genetically modified organisms (GMO) Unit.  Less than 2 months later, her feet were comfortably ensconced beneath a desk at Syngenta, one of the world's largest biotechnology firms.  Without any significant ‘cooling off’ period, she was graced with the job title Head of Biotech Regulatory Affairs for Europe, Africa and the Middle East and made responsible for many of the GMOs assessed by Dr Renckens' former employers.

Had it not been for German non-governmental organisation Testbiotech, this blatant conflict of interest would have slipped under the radar. Its complaint, submitted in 2010, was the subject of a draft recommendation by the EU Ombudsman in December 2011. The Ombudsman's final decision has now been published, following its assessment of EFSA's response to its draft report.

Although written in the dry, slightly understated and always unemotional language unique to bureaucrats, the Ombudsman's final report is highly damning of EFSA. Three recommendations were made in the Ombudsman's draft report:

While observing that EFSA implemented a revised Independence Policy in February 2012, following widespread recognition of the failings of its predecessor, the Ombudsman declared that, “EFSA's implementation of his first draft recommendation is not fully satisfactory”.  Any other conclusion would have been difficult, given that EFSA initially attempted to dismiss the Ombudsman's recommendation on the grounds that it went beyond the bounds of his investigation. That, and the fact that the wording of EFSA's revamped Independence Policy narrows the definition of 'conflict of interest' in an apparent attempt to get itself off the hook in such cases.

Some ideas deserve to be followed through

Moving on to point 2, the Ombudsman expressed his “regret” that “EFSA maintained that it did carry out an assessment of the conflict of interest...and reached the conclusion that there was no conflict of interest”. We can only imagine EFSA's dismay when it discovered, “That assessment was not recorded”, or its surprise when it discovered – very late into the investigation – that Dr Renckens had informed EFSA that she, “Did not have a new employment coming up after quitting EFSA”. The Ombudsman gave this self-serving and dishonourable nonsense short shrift: he described EFSA's response as “inadequate” and even considered, “Submitting a special report on the matter to the European Parliament”. It's a huge shame, in our view, that this report didn't materialise, as it would have introduced cat to pigeons in no uncertain manner.

Fortunately for EFSA, the Ombudsman was satisfied with its response to point 3.

Unfortunately, a 33% pass rate by the EU Ombudsman amounts to a 'fail' in the real world. This sorry episode reveals the arrogant, high-handed reality behind EFSA's fine words about, “High-quality scientific outputs based on transparent, open and unbiased scientific decision-making processes”. Anyone surprised at EFSA's attitude to conflicts of interest should take a look at our report from its 2011 workshop on independence, and consider that EFSA officials are in broad agreement with the UK Food Standards Agency's Andrew Wadge when he says: “I have no problem with industry-funded research, provided it is subject to the same peer review requirements [as independent research]...it does not make the research or the scientists tainted”.

With people like this in charge of food safety throughout the EU, the vigilance of groups like Testbiotech and Corporate Europe Observatory becomes more important than ever. ANH-Intl will continue to stand shoulder-to-shoulder with them in bringing the bureaucrats to book – and we hope we can rely on your support.