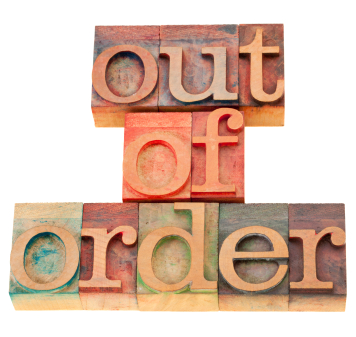 The THMPD is not fit for purpose, and UK herbalist statutory regulation has stalled

Broken regulations affecting herbal products in the European Union (EU) and herbal practitioners in the UK are in the news again.  The European Medicines Agency (EMA) has just published its latest, damning ‘school report’ on the EU’s Traditional Herbal Medicinal Products Directive (THMPD). Coupled with the stalling of UK government plans to bring in statutory regulation of herbalists, the future for herbalism remains manifestly unsettled.

New traditional use registrations down year-on-year

The latest EMA report on the THMPD covers the period up to and including 31st December 2012, in addition to the data in its two previous reports. A total of 264 new traditional use registrations (TURs) were granted EU-wide to herbal medicinal products in 2012 (Figure 1), bringing the grand total to 1015 (673 single-herb, 342 polyherbal) since the THMPD became law on 30th April 2004.

Of these 264 new TURs, 163 were for single-herb products and 101 for polyherbal products, the first time since the THMPD became operative that new TURs have dropped – by a whopping 29.6% – year-on-year. We appear to have passed ‘peak TUR’. 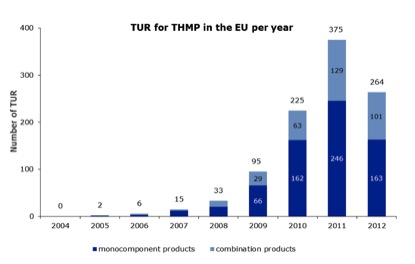 Marketing authorisations granted under the well-established use (WEU) provisions of Directive 2001/83/EC have remained consistent (Figure 2), with 82 in total for 2012 – 59 for single-herb products, 23 for polyherbal formulations – up by 9 (12.3%) compared with 2011. Because of their increased rigour relative to the already strict THMPD, WEU marketing authorisations are only accessible to the largest and best-funded companies. And with the number of new TURs in steep decline, the smaller companies that are the lifeblood of the herbal industry are being shut out more than ever.

Not a very ‘traditional’ Directive

A closer look at the 342 polyherbal TUR products (Figure 3) shows that the vast majority (n=246; 71.9%) consist of 2–4 herbal components. There are 67 (19.5%) products containing 5–9 components, a drop in percentage terms compared with 2011 [/news/european-medicines-agency-releases-second-report-on-eu-herbal-directive]. In no way does this situation accurately reflect the practise of any long-standing herbal tradition, since formulae in the Western tradition commonly contain 5–10 herbs and those used by Indian Ayurveda and traditional Chinese medicine (TCM) often contain 12 or more. Ayurvedic chyawanprash may contain up to 80 herbs, and commonly includes 40–50 ingredients!

The pharmacopoeias of just Western herbal medicine, Ayurveda and TCM include up to 1,500 different plant species. By contrast, after nearly a decade of operation, the THMPD’s simplified registration scheme has allowed a total of 133 herbal species through its doors (Table 2), very few of which are associated exclusively with non-European traditions. The list of approved indications for TUR herbal products is similarly brief (Figure 4), consisting of a mere 14 therapeutic areas. 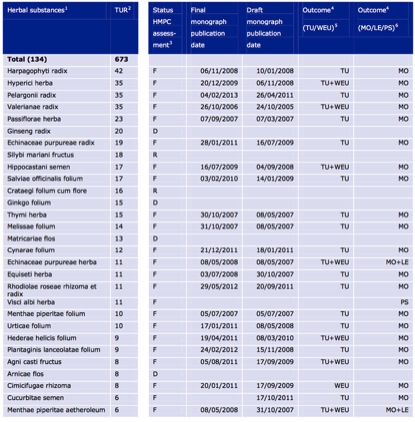 The THMPD: Not fit for purpose!

There’s no need for anyone to make a case against the THMPD based on the text of the legislation and its theoretical impact on the herbal products market, because the EMA’s own figures utterly condemn the herbal Directive.  There is almost zero chances that common sense will prevail and EU regulators, supported by Member States, will see sense and repeal the law.  The only practical way of  fixing the THMPD, we believe, is through a favourable judgement at the European Court of Justice – which is what our legal challenge is all about.

UK herbalists in the long grass

Yesterday, on Tuesday 9th July, UK Member of Parliament (MP) David Tredinnick hosted a debate on statutory regulation (SR) of the country’s herbalists. Many people in the UK are wondering what their government is up to, after it promised SR in 2011 and then did precisely nothing. The Minister responsible for herbal medicine policy, Dr Dan Poulter, attended the debate, and his comments provided the first developments in quite some time.

In short, the government is kicking the entire issue into the long grass using the time-honoured politician’s technique of the infinite consultation. After literally decades of meetings, consultations, working groups, committees and focus groups to get us to this point, Dr Poulter proposed...another working group to discuss the “complex” issues raised by SR.

Once again, Dr Poulter is using as justification a recent judgement on a Polish case in the European Court of Justice (ECJ) that reveals Poland broke the law by importing cheap, unlicensed medicines – even though the imports were identical in terms of active substance, dose and form. The ECJ reached this conclusion because the imported medicines had not been granted a marketing authorisation according to EU medicines law. Dr Poulter’s comments on the Polish case confirm the statement made by Lord Pearson of Rannoch in a House of Lords debate on SR held on 24th April.

This is strange logic indeed, since SR would allow the UK to comply with EU medicines law whereas Poland was deliberately flouting it, albeit with some justification. But it’s heartening at least to know that the UK government thinks little of the argument proposed by skeptics like Lord Taverne, that SR would confer spurious respectability on a ‘quack’ profession.

Although we’re not convinced of the need for yet more discussions on this issue, we can confirm that we will be directly involved in them and we’ll keep you posted on developments. Along with others involved in the recent SR campaign, such as the European Herbal & Traditional Medicine Practitioners Association, we have been working hard behind the scenes to get to this point – so it’s a shame that none of these organisations were mentioned during yesterday’s debate.

EU herbal medicines legislation, then: it’s a complete mess. The sooner we can get into court and sort it out, the better – we look forward to your support!