Home News UK cancer treatment: When ‘out of the ordinary’ means ‘out of luck’ 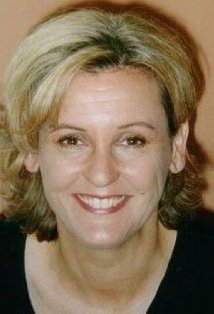 UK cancer treatment: When ‘out of the ordinary’ means ‘out of luck’

Lynne Hazelden is caught in a bureaucratic nightmare &ndash; and nothing less than her life is at stake

Lynne Hazelden acted in the original Star Wars movies and various UK television programmes. Today, she finds herself in a bureaucratic labyrinth, searching desperately for effective cancer treatment while the clock ticks down – all because she’s an unusual case without a ‘treatment pathway’. This is her story, as recounted to ANH-Intl – the first step in a campaign to create comprehensive, positive change within the NHS.

Lynne’s health problems appear to stem from dental issues present since birth. After contracting measles in the womb, Lynne was born with enamel dysplasia; as a result, she had her milk teeth removed and her adult teeth grew in irregularly. Guy’s and St Thomas’ Hospital in London straightened them by fitting a brace, after requesting that Lynne's own dentist fit her with two large mercury amalgams in 1994, in preparation for the rearrangement work. When her brace was  replaced with a smaller retainer by a student orthodontist at Guy's, the orthodontist noticed a lesion in Lynne’s cheek next to one of the fillings and referred her for assessment at the hospital pathology department. A biopsy showed that the lesion was a rare ‘topical lichenoid reaction to amalgam’, which later developed into erosive lichen planus.

In 1998, another Guy’s student began work to replace the amalgams with crowns, but failed use a dental dam on Lynne to prevent contamination during the drilling process. Soon after this point, her symptoms became systemic: she began to experience rhinitis and sinusitis, and lesions similar to those in her mouth appeared across her body.

To Lynne, it seemed both obvious and logical that she was experiencing an allergic reaction to the mercury fillings, but that’s when she first heard a soon-to-be-familiar refrain from the dentists at Guy’s: because there’s only been 50 cases of mercury allergy in the last 100 years, it can’t possibly be that! With the dental work incomplete, it took 2 more years of shuttling between Guy’s and local dentists before Lynne ended up back at Guy’s, begging for a patch allergy test after becoming sicker and sicker. Finally, in the year 2001, she was patch tested – and the results revealed that Lynne was strongly allergic to both mercury and the dental amalgam used in her fillings.

Bizarrely, and as it turned out, illegally, Guy’s refused to continue removing the amalgam from her mouth. It wasn’t until early 2002 that Lynne found an NHS community ‘special cases’ dentist to take the job on, after a representative of the Dental Association legal department told her that Guy’s was legally obliged to refer her if they could not do the work themselves.

By this time, she was in constant pain, but again, the dental procedure that was meant to help her only succeeded in making things worse in the long run: afterwards, she began to pass out regularly, she exhibited the symptoms of a mitochondrial dysfunction and a paramedic told her that her blood test results were indicative of liver failure.

An independent review panel at Guy’s and St Thomas’ refused to acknowledge that her reaction had a mercury allergy as its root cause, although they did agree that ‘something’ had happened. Lynne presented them with the results of her patch test and offered them her diary as a record of what had happened, which they refused. When her local hospital’s head pathologist agreed to see her, she allowed herself to hope that things might be changing for the better – until he declared, on the basis of a fresh blood test and without considering her allergies, that Lynne’s mercury levels were safe and that mercury allergies simply didn’t occur. Guy’s and the patch test, apparently, were both wrong.

All the NHS had to offer Lynne at this point – when she was suffering boils, bleeding and ulceration in various sites – were antibiotics and a diagnosis of chronic fatigue syndrome. As her health and short-term memory both declined and she became largely bedbound, she decided to go outside the system. She went to see a functional medicine (FM) practitioner, who put her on a targeted supplement programme that quickly improved her quality of life. Without any outside financial assistance to pay for the programme, however, she soon began to struggle. 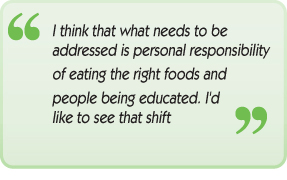 From compassion to aggression

“I’m so sorry, we haven’t taken care of you.” Spoken by a locum NHS consultant, Lynne had waited a long time hear these simple words and the concern they conveyed, and it would not be the last time she heard a similar phrase. It was like waking from a bad dream. Soon she was supplementing to address low iron and folic acid levels; her mobility improved and her sores began to heal. Then her nipple began to itch around a patch of tough skin – and the nightmare began again.

Against her own best advice and the strong recommendation of a consultant doctor, Lynne consented to a mammogram – which revealed nothing more than the ultrasound she requested. Four core biopsies came next, performed by the same consultant in an unnecessarily painful and rough manner that left Lynne bruised and sore. It could have been worse: only Lynne's protests prevented him taking a fifth biopsy.

In October 2010, she was diagnosed with aggressive Grade III ductal carcinoma. Her allergies made Lynne determined to avoid radio- and chemotherapy at all costs, and so, in November 2012, she opted for treatment with a unilateral mastectomy and tamoxifen. A few days of tamoxifen caused a severe reaction that lasted for several months. Then, in July 2011, she felt a lump in the last place she would have expected: her reconstructed breast, in precisely the position where the post-core biopsy bruising had occurred. A fine-needle biopsy confirmed that her cancer had, indeed, returned.

It’s our way or nothing

Lynne’s consultant insisted that having her lymph nodes removed and a course of standard chemotherapy would cure her; Lynne replied that this was out of the question, because of her allergies. When she asked about lipoplatin, which is cisplatin-based but with reduced toxicity, her consultant, “Acted like I was talking about green tea therapy or something!”: there is no ‘treatment pathway’ for lipoplatin, even though it is being investigated in Phase III clinical trials in the UK at present, a fact not made clear to Lynne at the time. No ‘treatment pathway’ – no treatment.

So Lynne took matters into her own hands, raised £10,000 and went to Israel in January 2012 for a course of lipoplatin alongside oncothermia, after NHS surgeons performed a lumpectomy alongside lymphadenectomy to remove only the affected lymph nodes. Her ultimate aim was for treatment with dendritic cell therapy, a 'cancer vaccine' that retrains the immune system to respond to cancer cells and clear them from the system. The Israeli doctors told her that she’d need a supportive UK NHS oncologist, a positron emission tomography (PET) scan to confirm that her disease is at an appropriate stage – and, of course, money for the vaccine treatment. Further fundraising was clearly in order.

When a good doctor isn’t enough

Upon her return, she was referred to another consultant, Prof Paul Ellis, who immediately understood the seriousness of Lynne’s allergies. Prof Ellis expressed surprise at how she had been treated and that her allergies were not being taken seriously, urgently referring her on to Prof Angus Dalgliesh at St George’s Hospital in London. Crucially, Prof Dalgliesh has a keen research interest research in cancer vaccines and should, according to Prof Ellis, have been able to arrange a PET scan.

Easier said than done – yet again. In July 2013, Lynne is still waiting for a PET scan, or any treatment. And even the support of a heavyweight like Prof Dalgliesh hasn’t been enough to secure Lynne’s funding. Because the vaccine is not a standard treatment – an approved ‘treatment pathway’ for Lynne’s situation is not even on the horizon – a fiendishly complex, 10-page form must be completed in support of the application. Even Prof Dalgliesh describes it as “impossible” to fill out in its entirety, even though he believes Lynne to be an excellent candidate for dendritic cell therapy. The form has made its way from general practitioners (GPs) to consultants to NHS Trust bosses for sign-off – but it keeps boomeranging back to Prof Dalgliesh.

All the while, Lynne's condition has been deteriorating. In March 2013, she was admitted to hospital as an emergency after waiting over a month for a computed tomography (CT) scan, ordered by Prof Dalgliesh to investigate pains in her abdomen. The scan showed that the cancer had spread to her peritoneal cavity, ovary and liver; Lynne needed 4.6 litres of fluid draining from her abdomen. Fortunately, the metastases are small and Lynne has avoided radical surgery, although tumour-reducing 'debulking' will be required before she can receive dendritic cell therapy.

While this seemingly interminable process has creaked and groaned toward resolution, Lynne has been taking low-dose naltrexone on the advice of Prof Dalgliesh, along with regular supplement infusions, and for a while her breast lump appeared to recede. Recently, however, her tumour markers have risen significantly – while the political buck-passing continues.

There are three painful ironies in Lynne’s case. Firstly, and as we have seen in the case of Neon Roberts, even though ‘treatment pathways’ are meant to be recommendations based on the best available evidence, they are increasingly regarded by the NHS hierarchy as mandatory rules to be followed ‘or else’. Even if a doctor, with supposedly sovereign clinical decision-making powers, wants to send a patient for non-orthodox treatment, they often find they cannot – or that the practical obstacles, such as “impossible” forms, are simply too great.

Secondly, the vaccine treatment that Lynne is finding so difficult to obtain will cost around £25,000. Compare this to the cost of the standard NHS treatment for her condition by radio- and chemotherapy: around £100,000. Viewed in this light, it makes even less sense that the NHS has erected so many barriers to Lynne obtaining a more suitable, more economically efficient form of treatment.

Finally, the NHS is supposed to strive for, “The best possible experience for patients who use NHS services...[to ensure] an excellent experience of care”. It’s hard to see where Lynne Hazelden’s experience fits into this lofty ideal. 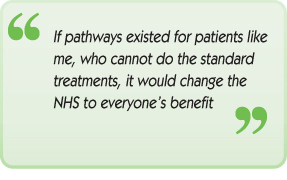 In Lynne’s own words

“I have been on a long, horrific journey – a living hell – just because something unusual happened to me,” says Lynne. “All I have asked for is care and treatment, but this seems impossible when you have something that isn’t ‘standard’, or when the professionals are reluctant to acknowledge it. I feel that, if pathways existed for patients like me, who cannot do the standard treatments, it would change the NHS to everyone’s benefit.

“I honestly feel that we have amazing professionals who want to help, but it seems that their hands are tied by bureaucratic political processes that make it impossible for them to care for anyone like me. At the end of the day, I just want to get well and have the treatment that my oncologist has suggested for me, a treatment about which he is a world leading expert. Why is it so hard?”