Home News Has EFSA softened on Seralini to align new guidelines with Monsanto?

Has EFSA softened on Seralini to align new guidelines with Monsanto?

In a strange turn of events, the European Food Safety Authority (EFSA) appears to have backtracked on many of the points made in its reviews of the rat feeding study of Monsanto’s Roundup pesticide and NK603 genetically modified (GM) maize, performed by Gilles-Eric Séralini et al.  Is this an attempt to accommodate the shortcomings of Monsanto’s own study protocols?

The European Food Safety Authority (EFSA) has published its guidelines for long-term, animal-feeding studies designed to assess the toxicity and carcinogenicity of GM crops.  With splendid irony, the new guidelines largely validate the methodology of the Séralini et al study, despite the strong criticisms levelled at the paper by EFSA and others at the time.

EFSA’s new guidelines are published in a Scientific Report entitled Considerations on the applicability of OECD TG 453 to whole food/feed testing. Campaign organisation GM Watch has done a sterling job of comparing EFSA’s new guidelines with aspects of its Séralini et al demolition job. The conclusion?  That EFSA now largely agrees with Séralini et al’s methodology –including aspects that EFSA used as justification for rejecting the researchers’ conclusions.

Of course, now that the Séralini et al paper has been largely discredited in the eyes of the public, due to the stringent efforts of EFSA and biotech alike, it can afford to be more relaxed – not to mention scientifically honest. Will EFSA now formally retract some of the criticism heaped upon Séralini et al in its reviews? EFSA can’t have it both ways: either Séralini et al were wrong or they weren’t.

More of the same from EFSA

This episode merely confirms that there is something rotten in the state of EFSA. The Authority’s revolving doors with industry, including the GM industry, are well known.  Less well known, perhaps, is EFSA’s trust in big biotech’s own safety data.  We, along with organisations such as Corporate Europe Observatory and Testbiotech, have frequently challenged EFSA and reported on their industry leanings, topsy-turvy science and other misdemeanours. 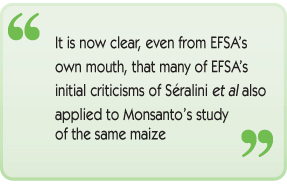 The Séralini et al study did deserve some criticism, but instead of adopting a responsible precautionary approach or acknowledging the need for further studies, EFSA jumped on the general bandwagon of condemnation emanating from the biotech industry.  It is now clear, even from EFSA’s own mouth, that many of EFSA’s initial criticisms of Séralini et al also applied to Monsanto’s study of the same maize, and indeed other GM ‘safety assurance’ studies designed by the biotech industry.  It is a scandal that EFSA apparently picks and chooses its scientific stance according to the job in hand: one week keeping its biotech friends happy by dismissing Séralini et al; and then, with the hatchet job complete, quietly admitting that the French group was right all along.

EFSA’s double standards are well summed up by Testbiotech: “[In] failing to challenge the scientific standard of studies which do not show adverse health effects from genetically engineered crops, while at the same time attacking studies that indicate evidence of harm, European Union authorities such as EFSA are applying double standards and follow a biased approach.  The authorities seem to be influenced by the presumption that genetically engineered plants should be regarded as safe and seem to be using the debate on scientific standards to defend their own opinions.”