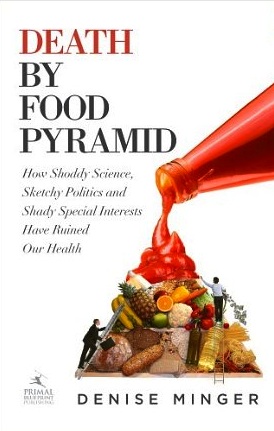 New book exposes the science-free nature of official diet advice &ndash; and entertains as it does so

“You’re a vital drop in a sea of potential change. You’re equipped with spending power, voting power, intellectual power. It’s time to use it.”

Concerned about your diet? Head spinning because of the contradictory and ever-changing advice in the mainstream media? Are you mystified why the dietary advice pushed out by government bodies is – let’s be honest – outdated, misguided and plain wrong? Denise Minger’s Death By Food Pyramid is the ideal compass to see you safely across these choppy waters. 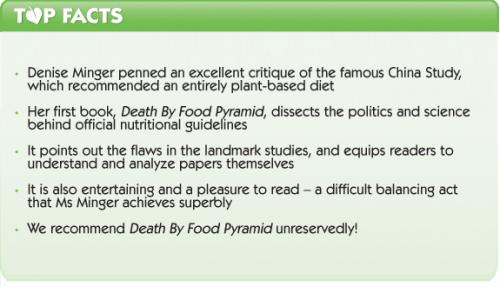 Once upon a time, there was the China Study.  The China Study was a behemoth of epidemiological research, which analyzed “mortality data for >50 diseases, including 7 different cancers, from 65 counties and 130 villages in rural mainland China”.  Because of its startlingly unequivocal conclusions – “There was no evidence of a threshold beyond which further benefits did not accrue with increasing proportions of plant-based foods in the diet,” the abstract notes triumphantly – the China Study may be responsible for more newly converted vegetarians and vegans than any other single piece of scientific research.

Enter Denise Minger.  In 2010, she was inspired to pen a blog post entitled “The China Study: Fact or Fallacy?” that took a microscope and a sledgehammer to the claims made by its lead author, Dr Thomas C Campbell.  A self-confessed “data junkie” and repentant raw food vegan, Minger made a highly persuasive case that the China Study was an epidemiological supertanker being led by the tugboat of Campbell’s convictions.  ““The China Study” is a compelling collection of carefully chosen data,” she observed.  “Unfortunately for both health seekers and the scientific community, Campbell appears to exclude relevant information when it indicts plant foods as causative of disease, or when it shows potential benefits for animal products.”  Some time later, and following a robust exchange from both sides, it was clear that the China Study was, if not toast, then certainly heavily singed around the edges.

Four years after taking aim at China Study, Denise Minger has published her first book.  Two and a half years in the writing, Death By Food Pyramid: How Shoddy Science, Sketchy Politics and Shady Special Interests Ruined Your Health...and How to Reclaim It! – to give the book its full US title – further cements the author’s burgeoning reputation as a dietary mythbuster par excellence.  Blessed with an enviable combination of analytical nous and a breezy, readable writing style, Minger is the ideal guide through the jungle of nutritional research.  If you’re a newcomer to this fascinating but contradictory field, we can’t think of a better place to start than Death By Food Pyramid – and even grizzled veterans of the diet wars will find much to admire here.

As its title suggests, the first part of the book focuses on the politics: how, essentially, US citizens came to be guided by dietary recommendations that have destroyed the health of millions.  Of course, those guidelines have been adopted and adapted by all the major industrialised countries.  Although the food pyramid itself has now been replaced by a plate in the US and UK, its baleful low saturated fat, high carbohydrate and polyunsaturated vegetable oil message lives on.

But it’s the remaining two-thirds of Death By Food Pyramid that will, in our opinion, snag the interest of most readers.  In “Part II: Slippery Science”, Minger flexes her analytical muscles to take on some of the landmark studies used to justify official dietary advice.  She’s great at cutting through “the statistical gobbledygook that is Science-ese”, not only highlighting the studies’ gaping flaws but equipping the reader to do a little scientific pruning of their own at the same time.  Ever heard of the Oslo Diet–Heart Study?  The Framingham Study?  The Los Angeles Veterans Administration Study?  These and others are picked apart in a manner equally entertaining and educational – truly a difficult trick to pull off, and Minger nails it.

Elsewhere, she uses the oscillating argument between researchers Ancel Keys and John Yudkin to illustrate how the former’s message won out over the latter’s, resulting in saturated fat becoming demonised in official guidelines while sugar got a free pass.

Minger pulls it all together in “Part III: New Geometry”.  She asks a simple question: when we consider the diets that work to some degree, “What universal themes emerge when we step back and view the bigger picture?  What can we distill from the chaos?”  For her, the ‘diets that work’ are the paleo/primal blueprint, the Mediterranean diet and whole-foods, plant-based diets, each with their own plus points and caveats.  Her conclusions are two-fold: that overlaps are limited (Figure 1), and that all of these diets completely jettison industrially processed vegetable oils, refined grains and refined sugar: “All three of our diet gladiators kick modern, heavily processed fare to the curb”.  Drawing on the work of Weston A Price, Minger emphasises the importance of individual variation – best recognised by the great Indian medical system of Ayurveda – to our individual ‘ideal’ diets: amylase production, carotene-to-retinol conversion, metabolic individuality and more will all have a bearing on which foods suit us the best. 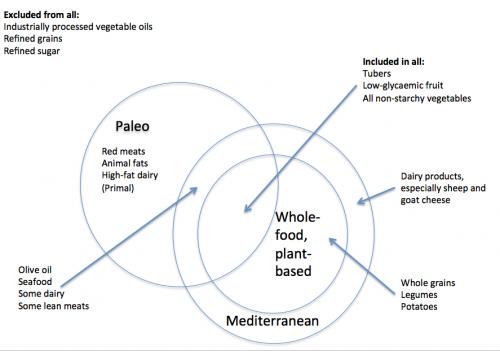 Figure 1. Overlaps and differences between the principles of the paleo/primal blueprint, the Mediterranean diet and a whole-food, plant-based diet. Adapted from Minger, D. Death By Food Pyramid. Malibu: Primal Blueprint Publishing, 2013.

Clearly, what you leave out of the diet is as important as what you introduce, a concept emphasised by the case of Crete. Lionised by Ancel Keys’ Seven Countries Study for their longevity, which Keys attributed solely to their ‘Mediterranean’ diet, the Cretans also observed religious fasting during many weeks of the year. Wholly overlooked by Keys, this piece of evidence further cements the importance of intermittent fasting to anyone interested in achieving optimal health.

Relatively short at 247 pages plus references and appendices, breezy, humorous and information-packed, Death By Food Pyramid should be on everyone’s reading list. And if you’re a dietary science newbie, don’t hesitate – order a copy today!

If you live in the USA and you’re trying to lose weight – as many are – the official sources provide a wealth of helpful materials. Not least among them are the 7-day weight loss menus, based around a 2,000 calorie/day target and built entirely from ‘approved’ foods. Which is all very well, but back in the real world, many Americans – and Brits, Australians and denizens of other industrialised countries – are happily munching fast food, epitomised by the McDonald’s Big Mac.

If we enter the contents of a not unusual Big Mac Meal – Big Mac, regular strawberry milkshake and large fries – into the McDonald’s Nutrition Calculator, we see that this single meal contains a whopping 1,300 calories. With recommended daily weight maintenance calorie intakes of 2,500 for men and 2,000 for women, and considerably less for weight reduction, it’s no wonder that many people are gaining weight rather than losing it. Many people, of course, eat fast food twice or even three times daily.

Clearly, mainstream diet recommendations have a long way to go: not only in terms of the science, as admirably demonstrated by Denise Minger and others, but in terms of their effect on people’s dietary habits.

Buy Death By Food Pyramid at Amazon UK, Amazon USA or direct from the publisher.