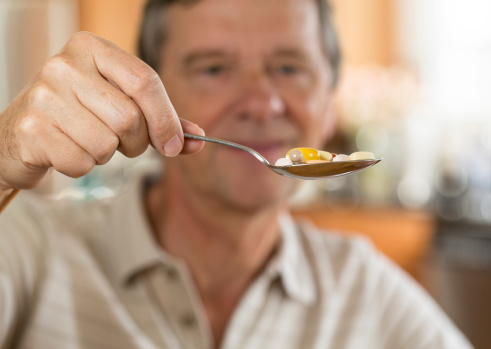 Newspaper headlines this week claim that vitamin E and selenium supplements may increase, rather than decrease as originally thought, the risk of prostate cancer.

You may remember reading similar headlines about selenium and vitamin E supplements and prostate cancer from 2008.  Both these findings relate to a large trial – the Selenium and Vitamin E Cancer Prevention Trial (SELECT) – started in 2001 and involving over 35,000 men studied in more than 400 centres in the United States, Puerto Rico and Canada.  The men were considered to be at moderate risk of prostate cancer based on prostate-specific antigen (PSA) scores and digital rectal exams, and were randomised to four different treatment groups: 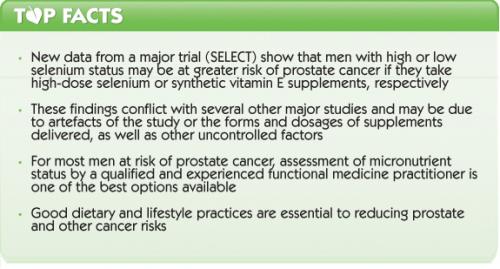 High-dose synthetic vitamin E: No thanks

The treatments were stopped in 2008 after the SELECT safety monitoring committee for SELECT issued a unanimous recommendation opinion that the goal of a 25% reduction in incidence of prostate cancer among any of the treatment groups would be highly unlikely.  The initial results from the first 7 years of follow-up showed no evidence of any net reduction, and a small, but statistically non-significant, increase in risk among the vitamin E-only group.

Needless to say, the vitamin E form being taken was the now somewhat infamous synthetic DL alpha-tocopherol, which suppresses the beneficial gamma-tocopherol form of vitamin E, the most common form consumed via the diet.

Further follow-up results published in 2011 showed that, for every 1,000 men, 76 of those taking the vitamin E supplements alone developed prostate cancer, as against 65 on placebo.  Those additional 11 cases per 1,000 amounted to a statistically significant 17% increase.  That generated headlines around the world, and high-dose synthetic vitamin E – justifiably – got another kicking.

Why did SELECT not work to plan?

Publishing in the Journal of American Medical Association (JAMA), the authors considered a host of reasons why the anticipated 25% prostate cancer risk reduction threshold was not realised.  They mulled over the possibilities that the vitamin E dose may have been too high, that it was the wrong form of vitamin E, and that the selenium form used in SELECT – selenomethionine – may not be as good as the selenium yeast shown to be beneficial in previous trials.  Theoretically, this could be related to the synthetic nature of the methionine part of the selenomethionine supplement used in SELECT: a form that may best be described as ‘biosynthetic’.  They referred to other trials, like the Alpha-Tocopherol, Beta Carotene (ATBC) trial and Nutritional Prevention of Cancer (NPC) Trial, in which selenium yeast showed a protective effect, and the Physicians Health Study II, in which lower-dose vitamin E (50 IU as against the 400 IU used in SELECT) was also found to be beneficial.

The latest swathe of negative headlines followed the issue, on 21st February this year, of press releases linked to new findings released ahead of print in the Journal of the National Cancer Institute (JNCI).

Last year, a picture emerged from SELECT of older men with double the risk of prostate cancer in the selenium or vitamin E arms of the study and high selenium status, as measured in their toenails. The latest JNCI findings show that those whose selenium status was high at the start of the study, and who then took selenium supplements, were at significantly increased risk of developing more aggressive forms of prostate cancer.  It also confirms the risk associated with high-dose synthetic vitamin E, but also shows that this risk is confined to subjects with low selenium status.

Taking the results at face value, the key messages from the JNCI data are perhaps simpler than it might seem:

The data also suggest that men shouldn’t take high-dose (200 mcg/day or more) selenium in the form of L-selenomethionine if they already have high selenium status.  Based on other trials, such as the Nutritional Prevention of Cancer (NPC) Trial, selenium yeast was found to be protective against both prostate and skin cancers when taken at 200 mcg/day, but this effect was again limited to those with low selenium status. 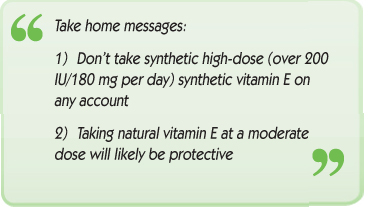 This research shines more light on the double-edged sword of selenium in cancer: on one hand a protector against it, while on the other, a potential cancer promoter.  Selenium’s role as an essential nutrient has been very well studied.  But, as is the case with some micronutrients, more is not always better – and the form, as well as an individual’s specific needs, are key.  Critically, sufficient selenium status is needed to reduce DNA damage, and it plays a key role in supporting vital glutathione antioxidant enzymes.  Let’s face it, in the US, thanks to a successful lawsuit against the FDA by our colleagues at ANH-USA, the words selenium and cancer can appear on the same product label under the tight conditions of a qualified health claims regime.

Yet, as is so often the case, it will in time likely become increasingly apparent why these new results have emerged.  Possible explanations may include artefacts of the experimental set-up, the effect of unblinding the trial and the wrong groups being given the wrong forms and an inappropriate amount of the micronutrients.

Across a diverse group of average-risk men, as is the case in SELECT, who took the supplements for an average of just 5 years yet were followed-up for 12, it’s not possible for benefits among specific groups to be isolated.  Then, we must bear in mind that negative news, especially about synthetic vitamin E, has been rampant in the media for most of the duration of the study.  How do you think this would have affected you, had you been a participant in the trial? As increasing evidence of the emotional and psychological triggers for cancer emerge, could it be that one day we’ll recognise this as a factor mediating additional risk in trials?  And let’s not forget the potential direct and indirect impact of the biopsies used to confirm the presence of cancer in SELECT.

Melchor and Timmermans, two lawyers interpreting various rulings by the European Court of Justice as to which botanical products should be viewed as food supplements or medicines, famously titled their 2009 paper “It’s the dosage, stupid”.

This notion could equally be applied to vitamin E and selenium.  Except it’s also about the form of the nutrient – and the recipient population.  This is something central to the risk/benefit assessment that the Dutch research scientists at TNO are grappling with at present, as they develop a risk/benefit approach applicable to vitamins and minerals following our commissioning of them late last year.

It’s not hard to fathom why we face such a plethora of papers showing conflicting results.  Artefacts of the study, the effect of unblinding, increased concomitant treatments among those subject to screening or biopsy and genetic risk or predisposition, including specific genetic polymorphisms and an individual’s epigenetic profile, all provide a highly variable backdrop to these studies.  But there’s much more too. The duration of intake or supplementation, the length of follow-up, what pre-cancerous processes may already have been initiated prior to the start of supplementation trials and interactions with other nutrients or drugs can also play key roles.  For a given individual, taking too much or too little of a less-than-ideal form of the nutrient is crucial.

Doing nothing ain’t an option!

If you study the background science and the few large trials that placed question marks over high-dose supplementation of synthetic vitamin E, beta-carotene, folic acid and now selenium, one consistent pattern emerges: Elevated levels of these vitamins taken in optimal forms – from the diet – are consistently protective against cancer.  There is also clear evidence that some supplementation trials have worked very well indeed.  These facts alone mean that, for the vast majority of men, doing nothing isn’t the best option.

We must bear in mind that micronutrients cannot be considered in the same way as drugs.  Not everyone needs the same amount, nor are all forms of micronutrient given in supplemental form the same, nor are they necessarily equivalent in their effects to those we get from our diets.

That’s why people at particular risk of cancer and other chronic diseases – and that means most aged 50 or over, as well as those with a high familial risk – should be assessed for their nutritional status by a practitioner skilled in such matters.  It’s a sad fact that the average general practitioner has little or no background in this area, and can do little to check your status or recommend an appropriate dietary, nutritional and lifestyle protocol relevant to you.

By contrast, functional medicine practitioners are the primary group trained specifically in this field.

If you’re concerned, use your contact network, the Internet or other means to find an experienced and qualified functional medicine practitioner who can provide the support you deserve.

Non-standard therapies could save your life – and its quality

For those wishing to avoid biopsies, chemotherapy, radiotherapy or surgery, and wanting to benefit from the views of over 50 specialist doctors and health practitioners specialising in prostate cancer, we can’t recommend highly enough Peter Starr’s documentary, Surviving Prostate Cancer Without Surgery, Drugs or Radiation.  As Peter Starr, ex-motorcycle stuntman, film director and ANH supporter himself asserts, the film should be essential viewing for all men over 40.