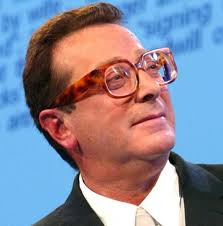 Changing the legal fabric of medical practice in the UK

The legal framework under which British doctors practice medicine must change fundamentally to allow more innovation. So said former advertising guru, Lord Saatchi, while launching a public consultation for his proposed medical innovation bill yesterday in Westminster.  This, he said, was necessary to stop lives being unnecessarily wasted by blind adherence to ‘standard care’, especially for hard-to-treat or rare diseases. 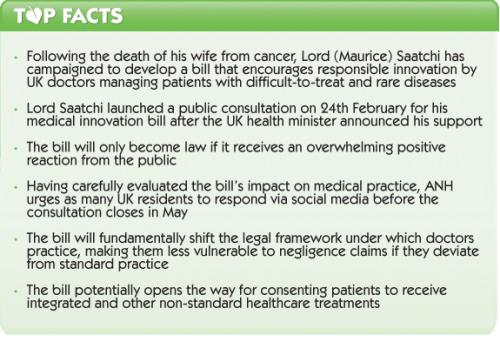 Former advertising guru, Lord (Maurice) Saatchi – who lost his wife to cancer 3 years ago – argues that lack of innovation in medicine causes thousands to die needlessly.  Doctors are effectively placed in a legal straitjacket, whereby any deviation from ‘standard treatment’ makes them liable to negligence claims.

This is not an imaginary problem.  The UK Treasury has set aside a £24 billion war chest to deal with such liabilities.

I attended Lord Saatchi’s launch of the consultation over his proposed Bill in Westminster yesterday (Tuesday 25th February).  The meeting was streamed live via Google Hangout.  With the UK’s Telegraph newspaper in full support of the bill, it was only fitting that Dr Max Pemberton, the newspaper’s health columnist, chaired the meeting.

Should a British doctor stray outside the scope of ‘standard care’ cemented in the form of NICE guidelines, he or she not only risks a negligence claim, but also being struck off the medical register.  This is a major reason that so many doctors keep on doing more of the same, often with little guarantee – or even knowledge – that the treatment will be effective.

Saatchi’s bill importantly also indirectly fingers the so-called ‘gold standard’ of evidence-based medicine, the randomised controlled trial (RCT).  The RCT has been the backbone of medical decision-making for over 30 years.  Yet it provides a huge barrier to innovation.  It is also particularly inappropriate for complex, multi-pronged interventions that might involve dietary and lifestyle interventions, the very processes that are increasingly implicated in mediating key chronic diseases like cancer, heart disease, type 2 diabetes and obesity.  RCTs are hugely expensive and time-consuming, and provide a limited perspective on what actually can happen within a clinical setting.

Those with misgivings about the value of the RCT in medicine will probably want to support Saatchi’s bill.  It proposes that, if methods other than an RCT provide plausible evidence for the likely effectiveness of a given treatment in a specific situation, the treatment in question should be allowed with no risk of a claim being made against the practitioners involved.  The proposed treatment must also be supported by the medics and patients involved.

The language of the Saatchi bill was developed with the help of a gaggle of leading lawyers and medics, who recognised the great deficiencies of the legal framework under which British doctors currently practice.  Along with Health Minister Jeremy Hunt, they argue that, if the Bill becomes law, it will allow doctors to deviate from ‘standard care’ in a controlled and responsible manner.

Lord Saatchi clarifies, the bill’s proposals as follows: “To innovate, doctors must have patient consent and the agreement of other senior medical experts and practitioners.  They cannot go it alone, but they can go beyond standard procedure without fear of ending up in court.”

Public consultation: make or break for the Saatchi bill

Whether Saatchi’s medical innovation bill works its way successfully through the UK Parliament, and into law, will depend largely on what kind of public reception the UK government receives from the public consultation launched yesterday. Responses must be in before May 2014.

With an innovative spirit in mind, the public consultation is being operated via social media from the SaatchiBill website.

We urge as many people as possible to respond positively to this call, bearing in mind that it will undoubtedly have its fair share of detractors.

The bill was not specifically drafted to open the way for so-called ‘alternative’, ‘complementary’, ‘functional’ or ‘traditional systems of’ medicine.  In fact – apart from my question relating to the bill’s potential application to support use of non-drug interventions that might involve dietary, herbal or lifestyle modification – there was no discussion by the bill’s instigators or supporters about use of any non-pharmaceutical or non-surgical strategy.

But reframing of the legal terrain within which doctors practice is an essential part of the positive change needed for healthcare reform, including increased use of natural health modalities.  As the evidence continues to accumulate in support of non-drug therapies for the prevention and treatment of the major chronic diseases, such as cancer, heart disease, type 2 diabetes and obesity, it will become progressively easier for these approaches to be accepted as both innovative and responsible.

There will also inevitably be strong interest among some advocates of the bill to use it to expand the use of old drugs for novel purposes.  For example, drug companies are very interested in extending the profitable life of drugs like metformin and statins, through their use, respectively, for prostate cancer and colorectal or skin cancers.

These concerns aside, our view is this: on the basis that the proposed use is based on plausible evidence, and is supported by both the doctors and patients involved, the notion of greater medical freedom should be supported, rather than hindered.

A powerful positive response by UK residents will ensure the bill’s future and its ability to see light of day as law.  We therefore call on you to respond now and tell as many other UK citizens about it as you can within the 2-month window of the consultation.

Submitting your support for the bill via the Saatchi website will take no more than a few minutes – and your efforts could save lives, maybe even your own one day.

If you want to find out more before responding, check out the Saatchi bill website’s FAQs.

Once you’ve responded positively, please share what you’ve done via your preferred social media or other communications system.  Let’s do what we can to help this go viral.