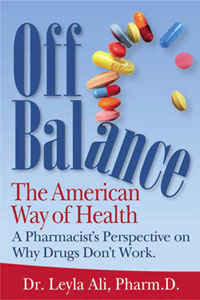 “The entire healthcare system has become a ridiculous circus of people running in circles following rules and regulations, while the population gets sicker and the pharmaceutical industry gets richer.”

Dr Leyla Ali, Off Balance: The American Way of Health

Often, it’s not until the ‘insiders’ step back and point out the failings in deeply embedded mega-systems like healthcare that people really sit up and take notice.  Enter Dr Leyla Ali’s new book Off Balance: The American Way Of Health – which has just gone on sale this week. This is an entertaining, highly accessible and big-picture view of a healthcare system seen through the eyes of a pharmacist.  Dr Ali and her choice of contributors, which includes ANH-Intl’s Rob Verkerk, make no bones that the healthcare system is off the rails, through the fence and now hurtling down a cliff! Not only do Dr Ali’s lessons apply throughout the industrialised world, but her advice to those looking for alternatives is both compassionate and timeless.

Good intentions and the road to hell

“Gentlemen, I’ve got some bad news and some good news,” intones UK comedian Bill Bailey in an uncharacteristically serious moment. “The bad news is that your chances of getting prostate cancer are just seven to one. In fact, prostate cancer is killing one man every single hour of the day in this country.” Bailey, who is advertising a new campaign from charity Prostate Cancer UK, doubtless thinks he’s doing good for British blokes by encouraging a nationwide bout of wallet-lightening on the charity’s behalf. Many, if not most, would agree.

Dr Leyla Ali is not one of them. In a chapter entitled ‘The Power Of The Mind’, she points out that “Advertisers understand how to appeal to the emotions and make the mind believe something that will lead them to more profits...The subconscious mind...does not understand negatives. If you focus on what you don’t want to become, you will create that which you don’t want.” So all those heartbreaking/shocking/depressing/eye-opening (delete as appropriate) charity ads may actually be partly responsible for increasing the rates of the diseases they’re set up to counter. Of course, in the USA, they also have to cope with direct-to-consumer drug advertising... 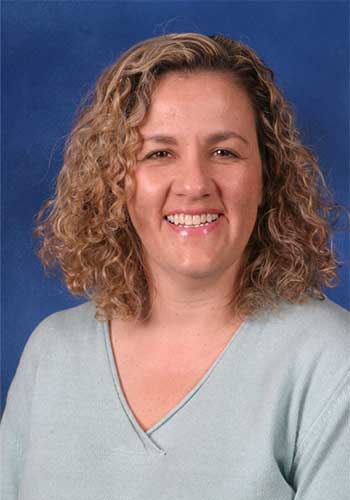 Dr. Leyla Ali, author of Off Balance: The American Way Of Health

Not your everyday pharmacist

Clearly, Dr Ali isn’t your common or garden anti-natural pharmacist. At least, not any more. Off Balance recounts how her lifelong ambition and expensive training soured when she became a front-line retail pharmacist: “I had a Doctor of Pharmacy degree, $90,000 in student loans to pay back and I was essentially working a retail job. Instead of helping sick people get better I was completely bored and forced to endure a time clock...Restless, depressed and exhausted summed up this period of my life.” Her restlessness drove her to research one of orthodox medicine’s worst blind spots: the power of cleansing and enhanced biotransformation – detoxification in the ‘old book’ – to help prevent disease and restore optimum health. Dr Ali discovered that an array of supposedly ‘incurable’ diseases of ‘unknown’ cause – Crohn’s disease, say, or rheumatoid arthritis – were not only the body’s natural and logical responses to a health insult, but also eminently reversible.

The first half of Off Balance takes aim at the US healthcare system and its myriad problems. Dr Ali notes that a range of natural therapies and training opportunities were widely available in the US prior to 1910, when the Rockefeller-funded Flexner report was published. This had its desired effect of promoting highly profitable drug-based medicine over and above everything else. A century of unfettered crony capitalism later, and the US system is groaning under the weight of over-reliance on poorly researched and over-promoted drugs, a population brainwashed into multiple pill-popping, widespread ignorance of natural and non-drug health approaches and a somewhat skewed view of how the human body functions...to name just a few.

Only a few of the problems she outlines are specific to the US, and Dr Ali does a marvellous job of presenting a potentially heavy subject in an accessible, clear and entertaining manner. Each chapter is ushered in by a light-hearted cartoon, and the book is picture-heavy throughout. My personal favourite: a series of progressively patched-up and rickety scales to illustrate disease progression under mainstream medical ‘care’. Likewise, Dr Ali never wastes a word, employing the unfussy and direct writing style demanded by a US audience even in the interviews that round off each chapter.

Looking at the big picture

But there’s plenty for everyone here: like I said, it’s a ‘big picture’ book. In the second half, Dr Ali introduces many key concepts of the natural health movement, from cleansing and detox, via the mind’s power to heal our bodies and control our environment, to the suppression of natural modalities by the orthodoxy in order to maintain the status quo. And how better to explain what Dr Ali terms ‘The Gameplan (For World Domination)’ than an interview with ANH-Intl’s founder and executive and scientific director, Rob Verkerk PhD? Despite multiple and concerted challenges, Dr Verkerk refuses to be discouraged: “I personally continue to be optimistic in the long term...Ultimately, a natural equilibrium will be achieved between ourselves and those parts of the environment with which we have co-evolved over millennia.” 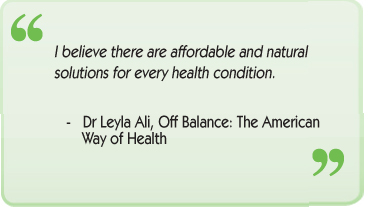 Dr Ali’s book offers the reader, especially those new to natural healthcare, a springboard to further research and knowledge that will help them to escape the suffocating limitations of mainstream ‘healthcare’ – better termed sickness management. Here are a few of Dr Ali’s suggestions for those about to begin their journey toward optimum health:

Secure your copy of Off Balance now.