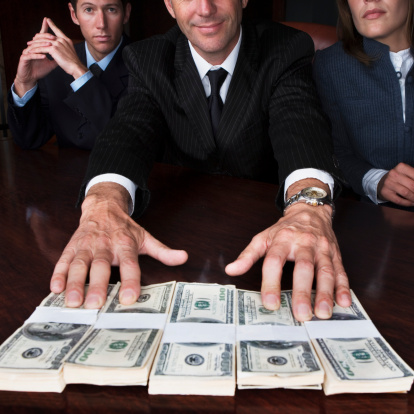 Here’s a brainteaser for you. Which industry can, in the same week, receive a fine of $9 billion, be shown to have defrauded the UK taxpayer of half a billion pounds, be accused of kickbacks, bribes and misleading its customers – and yet be praised by certain media commentators? You got it: the pharmaceutical industry. 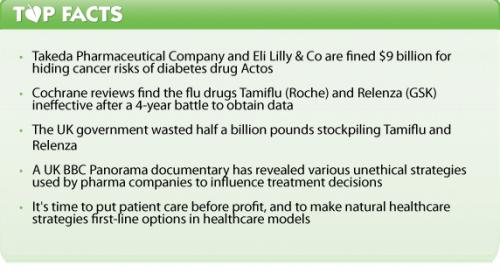 A US federal court jury in Louisiana ordered the pharma partners Takeda Pharmaceutical and Eli Lilly & Co. (LLY) to pay a combined $9 billion in punitive damages for hiding the cancer risks of their Actos diabetes drug. It was reported as possibly the “largest single award in US history over a drugmaker’s mishandling of a product”. Former Actos user Terrence Allen blamed the drug for his bladder cancer, and was earlier awarded $1.5 million compensation by the jury. More than 2,700 Actos suits have been consolidated in Louisiana for ‘pretrial information exchanges’, indicating that this is far from an isolated case. It is expected that the drug companies will appeal the jury verdict, and Takeda’s US general counsel said: “We demonstrated that Takeda acted responsibly with regard to Actos”.

Flu drugs ineffective: UK waste of half a billion pounds

This week, the UK Guardian newspaper informed readers about the publication of papers authored by the respected Cochrane Collaboration in the British Medical Journal which reveal that the UK wasted £560 million (€680 million) on stockpiling Roche’s Tamiflu and GlaxoSmithKline’s Relenza. Both of these drugs were supposed to treat influenza, and formed the bedrock of the government’s planned response to the predicted bird flu and swine flu outbreaks in 2005 and 2009, respectively. Now, however – after a 4-year battle with the drug companies to obtain the full clinical trials data — the Cochrane reviews reveal that neither drug is much good. Tamiflu, the review states, “modestly reduces the time to first alleviation of symptoms, but it causes nausea and vomiting and increases the risk of headaches and renal and psychiatric syndromes”. Relenza, says Cochrane, “reduces the time to symptomatic improvement in adults (but not in children) with influenza-like illness by just over half a day”. Recognising the deficiencies of these antiviral drugs, we reviewed a range of natural strategies for avian influenza in our 2006 report.

On hand to comment on the Tamiflu scandal was Dr Ben Goldacre, courtesy of a lengthy article also in the Guardian. Goldacre, you may recall, is the author of Bad Pharma, a book that took a close look at pharma’s dirty underbelly – before letting it off the hook. As we observed at the time, “The pharmaceutical industry can make a laughing stock not only of EBM [evidence-based medicine], but of mainstream medicine in general. It can kill and maim millions of people with its poisonous, smoke-and-mirrors nostrums. But because we need it so much, we’ll let it off with a slap on the wrist if it comes clean. Then we can enter some future medical Utopia by trusting the pharmaceutical industry to put in place the measures suggested by Dr G.” Those measures include Ben’s pet project, the Alltrials initiative, which seeks the publication of 100% of clinical trial data by pharma instead of the insulting 50% it currently deems appropriate: crumbs from the table. The European Union’s (EU’s) Clinical Trials Regulation will go some way to changing this situation, but only for new trials.

Just as a leopard doesn’t change its spots, a Goldacre clearly doesn’t change his floppy hairdo. His Guardian article basically rewords the section of Bad Pharma on the Tamiflu saga, before declaring: “We need to praise, encourage, and support the companies and individuals who are beginning to do the right thing. This now includes Roche [manufacturer of Tamiflu, who hid adverse data for several years and smeared Cochrane researchers before releasing the full dataset on a drug that doesn’t work]...Bravo, Roche.” Somehow, pharma always end up the good guys in Goldacre-land.

As readers of books like Goldacre’s or those by Dr Peter Gøtzsche or Marcia Angell well know, pharma’s business model relies enormously on influencing treatment decisions. Most patients, however, expect independence from their doctors, and trust that treatment decisions are always made in their best interests. A new UK BBC Panorama program, entitled “Who’s paying your doctor?”, was aired this week in the UK. It revealed some highly unsavoury facts about how pharmaceutical companies – GlaxoSmithKline (GSK) in particular – increase their profit margins through large payments to doctors, which absolutely translate into increased prescribing (and therefore profits) of particular targeted drugs.

The programme investigated or highlighted highly questionable misdemeanors such as the payment of large sums of money to medical experts to speak at industry-sponsored symposia, where they recommend particular drugs (and where financial links with pharma companies are not necessarily declared); sponsorship of doctors’ education, kickbacks given to doctors in the form of foreign trips and entertainment, payments made to doctors (i.e. bribes) for drug promotion to other doctors, and in return for increased prescribing figures, promotion of off-licence prescribing; bonus system for drug reps to encourage rulebreaking, low penalties, and a lack of transparency in respect of industry payments made to health professionals.

These aren’t new pharma strategies, but it’s clear to see that they are still up to their usual tricks.

As we noted before, Bad Pharma and Goldacre’s overall position are both limited hangouts, and the elephant in the room is that there will be no real solutions for patients while profit is paramount. While the integrity and motives of doctors themselves are mostly unquestionable, the western healthcare system allows the rot to spread throughout the system. Transparency and tweaks will make little difference to patient confidence in their care.

At the root of many health problems — especially the chronic conditions that overload our doctors’ surgeries and hospitals today — are issues that can be very effectively addressed with natural health strategies and modalities. Vastly more compatible with our body systems than new-to-nature drugs, it is sidelined in the healthcare industry because natural medicine and methods cannot be patented, and there is little financial gain. That will change when patient needs are placed before profit. Moreover, we should be encouraged to take more responsibility for our own health, and have ready access to effective and safer tools to do so.

On that note, keep an eye out for the launch of an exciting new health initiative which will help you make great strides along that road: Bite the Sun. You can visit the holding page now and register your interest to ensure you’re among the first to hear!