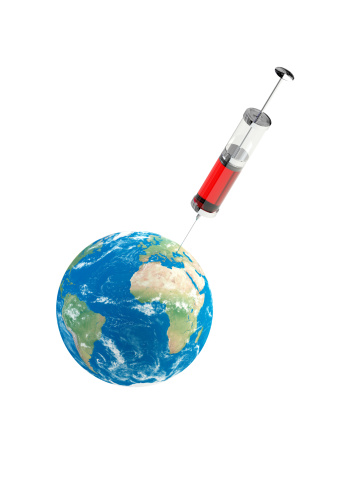 Needling the concept of universal vaccination

Vaccine illusions, collusions, and delusions as the mainstream narrative continues to crumble

Scratch below the surface of the reliably pro-vaccine mainstream media, and the official narrative looks increasingly threadbare. Highly dubious vaccine ingredients? Check. Herd immunity likely a myth? Check. Increasingly vicious attacks on those questioning vaccines? Check. We take a closer look at some important new developments in the vaccine story, and show why Australia is now the front line in the battle for vaccine choice. 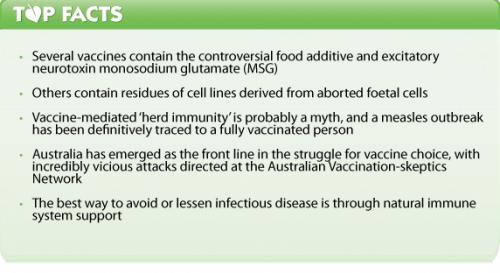 Would you knowingly inject yourself with an excitatory neurotoxin?

Oddly enough, we suspect the answer to the above is “no”. But anyone opting to vaccinate themselves with Merck’s shingles vaccine Zostavax will take exactly this risk. Zostavax, along with several other vaccines, contains the familiar and controversial food additive monosodium glutamate (MSG).

According to the US Centers for Disease Control (CDC), MSG is used as a vaccine “stabilizer”. Given the known risks of the food additive, it is likely that intravenous use of MSG is likely to present an even greater risk, especially among those on the autistic spectrum who appear to be more sensitive to elevated glutamate levels in the brain. Neurosurgeon Dr Russell Blaylock describes glutamate as one of a group of “excitatory amino acids that can cause sensitive neurons to die”. To add insult to injury, Zostavax is indicated for the elderly. Precisely the age group, says Dr Blaylock, most at risk from glutamate’s damaging effects.

What about aborted foetal cells?

Once again, we predict a rousing chorus of “no” in response. And once again, Merck’s Zostavax is a prime culprit. The CDC’s list of vaccine excipients reveals that, in addition to MSG, Zostavax contains “residual components of MRC-5 cells including DNA and protein”.  MRC-5 cells were originally obtained in 1966 from aborted foetal lung cells. This unsavoury tidbit perhaps explains why Merck omits MRC-5 cells from its Zostavax patient information leaflet. A closer look at the CDC list shows that MRC-5 cells are widely used in vaccines, along with another cell line obtained from aborted foetal cells, WI-38. What’s even more bizarre is that a long list of consumer products, from soft drinks to chewing gum, utilise aborted human foetal cells at some point during the manufacturing process.

Never mind all that – we need to vaccinate to ensure herd immunity, right?

According to the theory of herd immunity, those who choose to be vaccinated are altruists, selflessly doing the right thing, in stark contrast to the unvaccinated, to raise the population’s level of immunity against the disease in question. According to Tetyana Obukhanych PhD, however, the opposite may be closer to the truth.

Among any population, individual variation means that only a fraction will be high ‘responders’ to any vaccine, thereby becoming immune to the disease being inoculated against for 10 years or more. As such, even 100% vaccination rates are utterly incapable of producing the fabled 75–95% immunisation rates necessary for ‘herd immunity’ to kick in. And remember, vaccination does not equal immunisation!

Even re-inoculation in the form of regular vaccine ‘boosters’ won’t help, because “poor responders remain poor responders to further vaccination and cannot contribute to herd immunity from viral diseases in the long run”. Mass vaccination campaigns, says Obukhanych, owe their successes to an additive effect in children on top of the lifelong immunity exhibited by older members of the population, who contracted the diseases naturally in childhood. As time goes on, “the proportion of vaccinated but non-immune young adults is now growing, while the proportion of the older immune population is diminishing due to old age. Thus, over time mass vaccination makes us lose rather than gain cumulative immunity in the adult population.”

Of course, as Dr Obukhanych also points out, many infectious disease outbreaks have occurred in highly vaccinated populations. Coincidentally, this and many of her other points were powerfully reinforced in a recent article reporting a measles outbreak that was traced back to a fully vaccinated person – apparently for the first time.

For those who want more information about the many myths surrounding vaccination, or wish to make informed decisions about how best to manage the health of the children in their care, there are few better reads than Dr Suzanne Humphries and Roman Bystrianyk’s Dissolving Illusions.

Dispatches from the vaccination front line

Reasoned debate around vaccination is a far cry from what’s currently unfolding in Australia, where the saga of the Australian Vaccination-skeptics Network (AVN) never ceases to amaze. The sheer level of vitriol directed at AVN founder and former president, Meryl Dorey, AVN members and Australians in general who question vaccination, largely originating from the Australian ‘skeptics’, may be unsurpassed in the annals of the debate over medical freedoms. Here’s a few examples of the spite directed at AVN for simply airing the other side of the vaccination debate:

The list goes on and on, leading one academic – Brian Martin of the University of Wollongong – to write numerous papers on the AVN’s travails and the vaccination debate in Australia generally. In the context of that debate, it’s difficult not to see the AVN’s experiences as symptomatic of official attitudes: recent developments include the ‘no jab, no play’ campaign and an imminent government decision over whether to disbar parents of unvaccinated children from receiving certain benefits. The AVN is clearly the most passionate, well-informed and articulate thorn in the side of the pro-vaccination zealots, both within the government and without, and their ability to stand firm and play fair in the face of such appalling abuse speaks volumes about both sides.