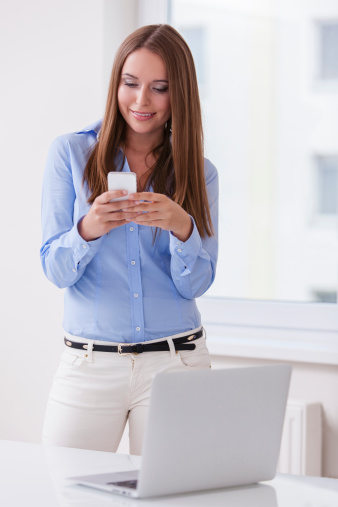 Clean bill of health only possible by ignoring contradictory evidence

As more evidence emerges of a link between mobile phone use and glioma brain tumours, a group representing the UK engineering and technology profession has issued a report entirely at odds with the new evidence. The report takes the usual industry line that harm from mobile phones is limited to heating effects, and concludes that low-frequency electromagnetic fields (EMFs) are perfectly safe. 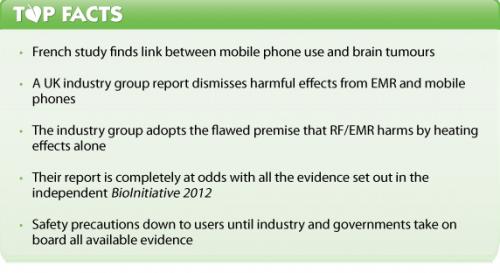 Link between heavy mobile phone use and brain tumours

The results of CERENAT, a French case-control study on mobile phone usage, were recently published online in Occupational and Environmental Medicine. The study gathered data from 253 patients with gliomas and 194 with meningiomas, matched with 892 control subjects, using a detailed questionnaire. The authors reported “a possible association between heavy mobile phone use and brain tumours”, echoing previous warnings. The authors concluded that glioma risk was greater for the heaviest users “when considering life-long cumulative duration and number of calls.  Risks were higher for gliomas, temporal tumours, occupational and urban mobile phone use”. The latter finding is particularly interesting, since it may point to an interactive or additive effect between widespread ‘electrosmog’ or other city-specific factors — perhaps even psychosocial stress — and mobile phone use.

Meanwhile, the UK Institution of Engineering and Technology (IET) – “the largest multidisciplinary professional engineering institution in the world” according to Wikipedia – has published the latest findings of its Biological Effects Policy Advisory Group (BEPAG).  BEPAG concludes: “The balance of scientific evidence to date does not indicate that harmful effects occur in humans due to low-level exposure to EMFs”.

BEPAG’s dismissal of concerns appears flippant and unconvincing when one considers the wealth of evidence for harm detailed in the comprehensive BioInitiative 2012 report, authored by 29 independent scientists with specialisms in the field.  BioInitiative 2012 informs us that effects of low-level EMF exposure specifically on cell DNA were recorded in no less than 27 studies, e.g. Ahuja et al, 1999.  Even a mobile telephone company patent application from 2003 acknowledged the cancer risk from wi-fi communications.

On mobile phones, which have now been around for about 20 years, BEPAG concludes:  “The existing data do not provide persuasive evidence that harmful health effects exist”.  But studies such as CERENAT and those of Dr Lennart Hardell, highlighted by BioInitiative, suggest otherwise.  BEPAG even dismisses concerns about health effects in children, which are being taken very seriously elsewhere.  The whimsically named SCAMP – Study of Cognition, Adolescents and Mobile Phones – study, funded by government and industry and run by Imperial College London, will investigate the effects of electromagnetic radiation (EMR) on the mental development of 2,500 children. It’s worth noting that funding for such studies does not materialise when there is scientific certainty of zero risk as proposed by BEPAG and others.

BEPAG adopts the flawed premise that the only way that radiofrequency (RF)-EMR exposure can damage health is through a heating effect on tissues – the official line of the UK Health Protection Agency (HPA) and the Advisory Group on Non-Ionising Radiation (AGNIR).

However, the conclusions of the BioInitiative 2012 report include: “It appears it is the information conveyed by electromagnetic radiation (rather than heat) that causes biological changes – some of these biological changes may lead to loss of wellbeing, disease and even death”.  What’s more, “There may be no lower limit at which exposures do not affect us...it is unwise from a public health perspective to continue “business-as-usual” deploying new technologies that increase ELF and RF exposures”.

BEPAG expresses concern about the “scientific robustness” of research suggesting health issues associated with EMR, particularly a lack of “independent replication” of initial studies, and bemoans the prominence of such reports in the media. We think it’s no surprise that experimental replication may be slow in emerging, given the lack of research funding in the area. But BEPAG’s apparent distress also rings hollow when one considers its own ‘examination’ of the scientific literature is entirely unreferenced. Even a brief position paper such as this should find space to show us how it reached its conclusions.

If not a whitewash, then BEPAG’s report is at least a considered ‘toeing of the line’ that bolsters the position of the UK government and scientific establishment. Until such time as industry and government alike take on board a full and comprehensive analysis of the available evidence, it is up to us to take the steps necessary to avoid harm from our gadgets and mobile phones.

If you’ve got an iPhone, have you ever read the Legal notice that’s tucked away in the Settings? Got to Settings > General > About > Legal > RF Exposure.

Following is an excerpt: “To reduce exposure to RF [radio frequency] energy, use a hands-free option, such as the built-in speakerphone, the supplied headphones, or other similar accessories. Carry iPhone at least 10 mm away from your body to ensure exposure levels remain at or below as-tested levels.”

And how many people really know not to put their phone to their head or not to carry it in their pocket?

With such advice buried so deep in the iPhone’s menu system, it sounds to us like the manufacturers well understand their need to protect themselves from future litigation by brain cancer victims.

How to protect yourself