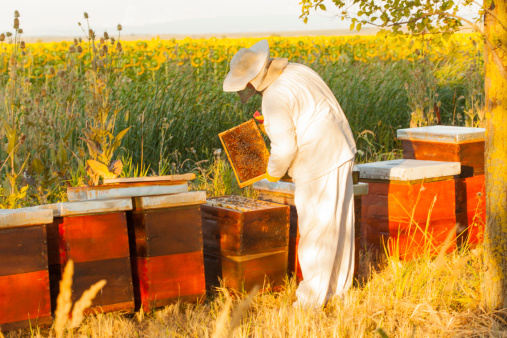 ANH-Intl Feature: Buzzing with health – an interview with Alison Derrick of BeeInspired

There are an awful lot of skin products out there.  Many of them try to sell you the earth (or at least a wrinkle-free face), and many are actually harmful.  There’s even an enormous number of skin creams, ointments and lotions selling themselves on the benefits of ingredients derived from bees.  But genuinely all-natural products, with nearly every ingredient made by the passionate and hands-on beekeepers that own and run the company?  It’s safe to say there aren’t many companies like BeeInspired!  Adam Smith of ANH-Intl caught up with Alison Derrick, the company’s co-founder, for an exclusive interview.

Adam Smith (ANH): Why BeeInspired?  What prompted you to set up the company?

Alison: Let me give you some brief background first.  I grew up in Kendal, in the UK’s Lake District, and moved away to to study art and three-dimensional design and interiors at art college.  I then worked for a while with my husband, who’s a commercial interior designer, but it wasn’t long before I became a mother.  When the children were very small, in order to have some space for myself, I joined forces with a friend and we took an allotment together near where I lived in Surrey to grow vegetables.  As time went on, we met more ladies who needed some space and friendship and the allotment almost became a women’s cooperative!  This was about 20 years ago.  At that time, the Kingston Beekeepers’ Association moved from their previous apiary and took two plots on our allotment.  A friend and I decided to learn how to keep bees, and that’s where it all started.  She moved not long afterwards, and I figured I had to keep it going!

I kept my bees in the apiary on the allotment for the next 10 years.  Then, 7 or 8 years ago, I met Diane Davison, whose mother-in-law had kept bees for many years and who wanted to do the same, so we decided to do it together.

Adam Smith (ANH): So that was how it started? What then?

Alison: In the tradition of beekeepers, I made candles, leather creams, furniture cream and lip balm: things that are very simple and straightforward to make from beeswax. I’d always joked that if we could make my leather and furniture cream into face cream, we’d be onto a winner.  So we decided to do so!  We established that we had to mix honey and beeswax with other oils and water, and we found six natural oils that moisturise, nurture and heal the skin: namely sweet almond oil, rice bran oil, castor oil, cocoa butter, glycerin and an emulsifying wax made from rapeseed.  Because of their water content, we do use a preservative in our creams, but we chose phenoxyethanol as it’s glycol based and paraben free.  We think it’s as close as possible to our all-natural criteria.

Honey and beeswax are natural moisturisers as well, of course – they’re hygroscopic, meaning they attract moisture and hold it in.  Beeswax and honey are also antifungal, antiviral and antiseptic, and raw honey is a marvellous healer if placed on raw wounds.  Ranulph Fiennes managed his arthritis with honey and apple cider vinegar.  Our bees collect most of the honey from sweet chestnut trees, garden plants and lime or linden trees.  Linden oil is marvellous for treating scars and wrinkles, and my theory is that our honey will have the same qualities as the linden blossom, in the same way as manuka honey. 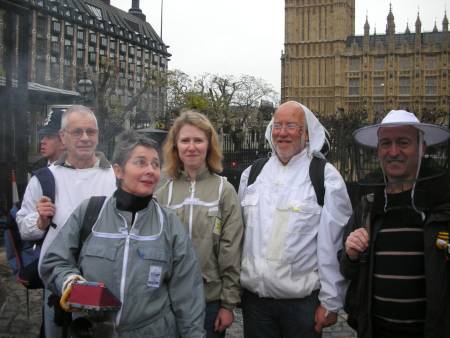 Adam Smith (ANH): Do you have any favourite ‘bee stories’ you can share with us?

Alison: Diane has an enormous sweet chestnut tree at the bottom of her garden, and the first year it came into flower, we put an additional box on top of the hive to collect the honey.  This box contained 11 frames for the bees to create their honeycomb and fill it with honey.  Each frame is made of wood and has a sheet of beeswax down the middle, to give the frame strength – the bees would normally have to do this themselves.  Between the Friday afternoon and Monday morning, they had eaten sufficient honey to create wax with which to build the honeycomb.  They’d then filled the honeycomb with nectar and worked it, by fanning it with their wings, to condense it into honey.  They’d then sealed all these 11 frames.  It was the most phenomenal thing.  We’re in awe of our bees and how clever they are!

[At the top of a Bee Inspired press release is this interesting tidbit: “To make 1 lb of wax, bees need to eat approximately 5 lb of honey, and to produce 1 lb of honey one bee will fly as far as twice round the world collecting nectar".]

Adam Smith (ANH): Have you experienced any problems with bee deaths, such as colony collapse disorder?

Alison: Not personally. I think that in my part of the world, which is semi-urbanised, very green and just outside London, environmental pesticides aren’t a big issue.  I think our bees are exceptionally lucky, especially when I talk to beekeepers from around the country who have had lots of problems.  One thing I will say, though, is that bees were out much earlier this year, with swarms galore.  On the topic of swarms, something that beekeepers need to be telling the public, in my opinion, is that bees are at their most happy and their least aggressive when they swarm.  They’re just splitting the colony, so that if anything happens to the one, they have another for the future.  The working bees fly with the existing queen, and before they fly, they fill their bellies with honey.  Then they go off to find a new home in a swarm.

Alison: I’ve never liked the media-driven ‘routine’ of cleansing, toning and wearing lots of makeup.  I really don’t think it’s healthy for our skin, and it’s never suited me.  I wanted to make something that was more natural but worked; something that nurtures our skin, is undamaging and moisturising.  Our whole approach was ‘less is more’, with no hype.  We didn’t want to tell everybody that it knocks 20 years off their age – even if it does!  In fact, the only reason that any of our products are fragranced is that people kept picking up our unfragranced creams and smelling them.  So we investigated essential oils and only used ones that are beneficial for the skin as well as smelling nice: we ended up with geranium & orange, bergamot, sandalwood & pine and jasmine & rose.

Also, when we extract our honey, we take a frame from the hive that has honeycomb on both sides, and we slice off the front surface that the bees have covered with a very thin layer of wax.  Then, we spin the honey in a centrifugal device so that it spins out, and we use that wax that we cut off the front of the comb for our creams.  Nothing is overly processed, and we leave as much propolis, pollen and fine pieces of wax in the honey as possible.  After the extraction process, we give the frames back to the bees and they do a wonderful job of cleaning every last bit of damaged wax and residual honey from them!  We then use the frames again the following year.

We’re pleased to say that our philosophy is bearing fruit!  We entered four creams into various categories for the FreeFrom Skincare Awards this year – they have strict entry criteria that exclude products containing known harmful ingredients.  All our entries were accepted, and two creams were Commended while another was shortlisted.

Adam Smith (ANH): Given the products are all-natural and have so few ingredients, do you find you have few if any run-ins with regulators?

Alison: Not quite!  There’s a definite process that we have to follow before bringing a new product to market.  First, a chemist looks at the ingredients, works out their percentages and judges whether they could be harmful.  Also, anything containing water and which is exposed to the air could grow microbes, so we send samples to a lab for testing – when the samples are approved, we can send the products to market.  Or at least, we could.  Last year, the European Union (EU) changed the system and now everything we and companies like us offer for sale has to be logged on the European Commission Authentication Service (ECAS) database.  We estimate that it now costs around £500 to bring a single recipe to market, which is putting off many other people who might want to do the same.

Adam Smith (ANH): Can you recommend any good sources of info for people who have now been inspired by bees through you?

Alison: If anybody wants to learn more about the healing aspects, then a book called Nature’s Golden Healer by Gloria Havenhand really is the most beautiful book!  Also, if people [in the UK] are interested in beekeeping, they can contact the British Beekeepers' Association, which will hold details of their local beekeeping associations.  I recommend anyone who's planning on getting into beekeeping to find a friend to do it with: the boxes are heavy for a start, you’ve got two pairs of eyes for inspecting the bees and it’s just great to have someone to share it with.

Adam Smith (ANH): Thank you so much, Alison!

Rob Verkerk talks turkey with veteran activist and campaigner, Ronnie Cummins, as they dissect the underbelly of the covid-19 crisis