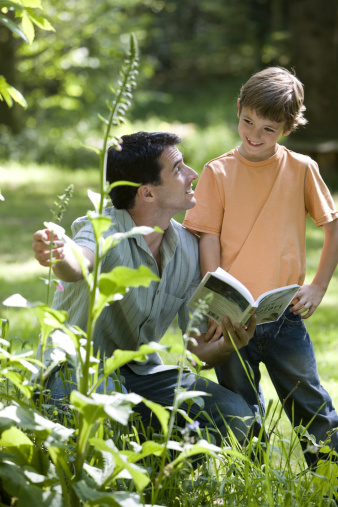 There has been renewed concern, action and publicity recently over the quiet removal in 2007 of over 50 nature words from the Oxford Junior Dictionary (OJD). It seems to have begun with a blog by the Natural Light Campaign, questioning the suitability of the dictionary as a gift for Christmas 2014. The campaign was then backed by a group of “28 major literary and media figures”, who wrote on 12th January, to Oxford University Press (OUP) in support of the campaign. They urge OUP to reinstate the missing words, for the sake of children’s connection to nature, and their overall wellbeing. Now, the children of ANH-Intl’s founder are adding their voices to this call, and including creative pieces using the missing words. 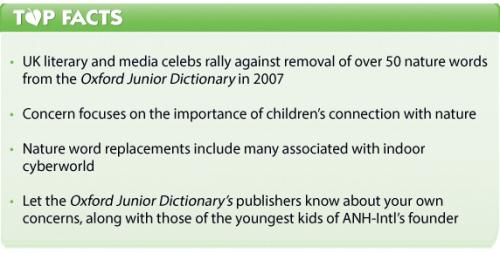 Children are born with a natural curiosity and desire to explore their world. Most have an intrinsic desire to discover their connection with nature. As modern life has become increasingly urbanised, indoor-based, safety-obsessed, isolated, electronic and gadget-focused, this learning is less actively encouraged. For many kids these days, there are fewer and fewer opportunities to ‘connect with nature’ and the outdoors.

An important part of our mission at ANH-Intl is to help re-establish our connection with nature. We were therefore very concerned when we heard that the OJD had removed a large number of nature words and that these had inevitably been replaced by words, many of which reflect the more unnatural things about our modern world. Words such as blog, broadband, MP3 player, voicemail, chatroom, database, attachment, bullet point, cut and paste.

In the 2012 edition of the OJD, currently sold in UK bookshops, we counted 18 species of birds. Yet, 13 species were removed in 2007, according to the Daily Telegraph. That’s approaching a 50% word extinction rate, sadly, almost equivalent to the 55% decline in the ‘farmland bird index’ between 1970 and 2013.

Language in use today by children

It appears that the OJD’s authors have done their homework to find out what kind of words 7 to 9-years-olds in the UK are using, or are asked to use courtesy of the national curriculum. But it’s a sad indictment of modern society that only 20% of British kids have what the Royal Society for the Protection of Birds (RSPB) defines as a ‘connection with nature.’

Our sense is that any creative or learning pursuit should not just reflect the status quo. It should push hard to bring things back to a balance that we know is a better, healthier one, that will contribute to a healthier and happier society in the years to come, where all enjoy a higher quality of life, and not simply materially.

When our founder, Rob Verkerk, brought this issue home, his two youngest children, aged 10 and 8 respectively, felt compelled to write a creative piece using the ‘lost’ words, to send to Oxford University Press. The children, who more or less represent the ages the OJD targets, were in shock that these words had gone from the OJD. They were equally alarmed when they heard about some of the words that had replaced them.

Sitting around the table one evening, earlier this week, this is what Rob’s kids came up with, with a little paternal smoothing of the English language. 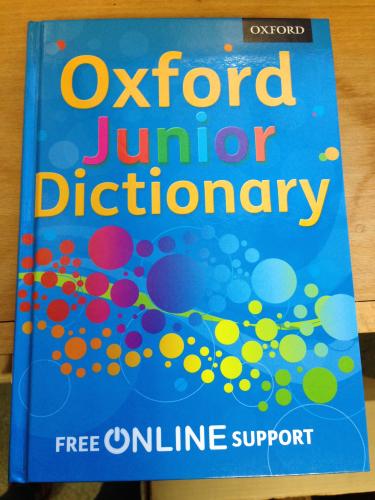 We love nature, so please put those nature words back into the Oxford Junior Dictionary

We’re just kids. But we love nature, and we love words. Using words to describe natural things is one of the best bits about school and being a kid. We find nature really important and beautiful, and we think it’s one of our best teachers. Nature’s so much more than a tree and a seed, or flesh and bones. It tells us about the meaning of life.

Playing outside, interacting and having fun in nature helps make us complete, happy and healthy.

Some of the best times we have are when we’re outside in nature, and many of the words you’ve removed from the Dictionary are ones we often use and think are important for stories about what we’ve been doing.

Please can you put back those words you took out of the Dictionary? We’re happy that you want to expand the Dictionary with new words that have come into our language, but we wish you hadn’t taken so many words out.

One more thing before we tell you our stories. We don’t want these words to be extinct like the ‘dodo’ which you’ve already removed from the Dictionary. We think ‘dodo’ should stay in too, along with all the names of plants and animals that we’re so glad are still part of our countryside.

I have only fond memories of the county in which I grew up. Weasels, stoats and ferrets darted from the bluebell-covered beech forests into the sun-soaked green pasture, punctuated by the bright yellow of cowslip, dandelion and buttercup. They were ever grateful to have escaped the sinister raven resident in the derelict, fungus-ridden abbey atop the hill, often seen hunting down its prey amid the gorse, bramble and holly that now almost envelope it.

Above the sweet, silver song of the lark, I heard a haunting bray. The sound emanated from our now neglected allotment. It had become the home of a lone bullock and a young colt. In the early morning, it was not unusual to see horses cantering along the adjacent bridleway. As the evenings drew in, I’d like to hide among the ferns, and watch flocks of starlings swoop across the violet skies. I was never content till I’d set eyes on the heron awaiting its catch on the banks of the babbling brook. The willow had become heavy, its branches trailing in the dark, nectar-like water. Hiding in the vines, that had become entwined in the stately sycamore, perched a kingfisher, preparing itself for its next minnow or newt.

It was there I caught my first glimpse of a river otter – a young one – resting in the shallows, camouflaged by the dappled sunlight. Rather like a young piglet in clover, it refused to be disturbed by the drake pecking noisily at the conkers littering the ground beneath the ivy-clad chestnut tree.

Unlike the words you’ve taken from us, otters are back from the brink of extinction. With the hunting prowess of a leopard, its cheetah-like speed and the swimming ability that could embarrass a porpoise, I would wait as long as it needed to see it resume activity.

Nature is always worth waiting for. Please don’t see it as irrelevant, because it’s as much part of us, as we are part of it. You can never be sure what you’ll learn, but whatever it is, you know it’ll add meaning to your life.

How do you like your oysters? Or would you prefer cauliflower-cheese and perhaps a snack of marzipan-covered almonds? None of the above, thanks.

Personally, I’ll go for Scottish rolled-oat porridge sprinkled with bran for breakfast. I love lobster, spinach and leek for lunch. And for dinner? Lightly grilled plaice is one of my favourites, along with honey-roasted parsnips, beetroot and a handful of peppery radishes. And for dessert, it’s got to be Grandma’s rhubarb crumble and custard.

But in case you think I’m a fussy eater, I should let you know that I also have quite an appetite for most forms of poultry, and wished bacon was as good for you as it smelled.

My favourite fruits are apricots, blackberries and melon. I always take prunes with me when I travel. I also like an occasional treat: and that’ll be liquorice any day over hazelnut spread.

If you feel strongly about this issue, please write to Oxford University Press and let them know how you feel.